There is a wandwavium in this planet that makes some islands float, it is really difficult to mine. When it has the appropriate treatment, it becomes a reactionless drive.

This drive consumes electrical energy and it converts in kinetic energy, they use this to create some flying ships. In non relativistic speeds, the conversion efficiency is super high, so it is more efficient than, let's say, an turbo prop or anything we use in modern airplanes. The more speed you have less efficient it is, so I won't need to bother having more kinetic energy in the ship than energy needed to run the drive, like this post about killing machines and perpetual motion stuff.

The origin of the electrical energy to the drive comes from thermal engines, like diesel or gasoline engines, that moves an generator. So without oxygen, the ships won't work as they don't have solar or atomic energy. This way the ships only work on the atmosphere. I suppose they could use an solar sterling engine to create an spacecraft, but, for now, only atmospheric ships.

What would they look like? Airplanes with less complicated drives? A lifting body without wings, like this nasa wonderful ship. Would they even need flaps to control the attitude of the ship if they can accelerate in whatever direction the reactionless drive is pointing?

They will look like an spaceship with multiple drives pointing in different directions so it can accelerate to whatever they want. If i am being too vague i can explain more, I just don't want do bore you to death with irrelevant details. The point is how they would look like being designed to work in a atmosphere similar to our own in relation to other non atmospheric scifi reactionless drive spacecraft.

The point is how they would look like being designed to work in a atmosphere similar to our own in relation to other non atmospheric scifi reactionless drive spacecraft.

You would want to minimize atmospheric drag, so the vessel would probably be drop-shaped, or avocado-shaped. This might just be a sort of shield cover made of waxed cloth, while the "real" vessel inside has a different shape.

Then, you need to take off and land, and here it depends - if it is simple to have several small engines, you would want to have some of them oriented downwards to negate gravitational pull, and at least two as far as possible from the vessel's center to provide steering and propulsion in the simplest way possible.

But if it is very expensive to have several smaller engines, then you'd go for a single large engine, mounted on gimbals, with the rest of the vessel gyroscopically stabilized. Much more complicated but cheaper.

Or you might go for a single engine thrusting backwards, relying on wings, fins and ailerons to provide direction. This means you need a runway to take off and land.

In all cases you would find it worthwhile to have at least wings, to increase the propulsive efficiency.

So, your vessel would resemble... an airplane. Or, depending on the devices' power, a blimp with wings, something like a Tiger Moth but without propellers (the propellers would be your reactionless impellers instead).

Unlike the Tiger Moth, not having buoyancy per se, your plane could not stop its impellers and land floating down. It could (but it would probably be a risky manoeuver) rise high, turn the impellers off, rotate them downwards and ride them down. This, again, would only be practical if the impeller thrust could be modulated efficiently. 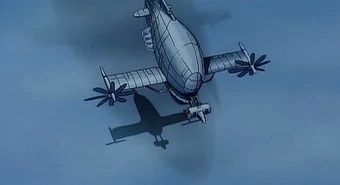 The first ever “solid state” plane, with no moving parts in its propulsion system, has successfully flown for a distance of 60 metres, proving that heavier-than-air flight is possible without jets or propellers. The flight represents a breakthrough in “ionic wind” technology, which uses a powerful electric field to generate charged nitrogen ions, which are then expelled from the back of the aircraft, generating thrust.

Your mystery element uses electricity to efficiently ionize air. Another chunk of it at the back of the plane operates on reverse polarity and serves to attract the ions. The ionic wind entrains ambient air and produces thrust and lift.

Some consequences of this mode of propulsion.

This "ionic wind" idea is one of my favorites. More reading on the WB stack.

Can I make my drone swarm quieter or Silent?

Two concepts are being considered that take advantage of how mass changes when it is accelerating.They propose two vibrating masses (which would then be sinusoidally adding or losing mass). The system is pushed apart when the pair is aligned in the direction of desired motion, and the system is allowed to restore when not aligned with the direction of motion.

The result is something like a transistor : allowing thermal energy (as kinetic energy) to gate into the system in only one direction. 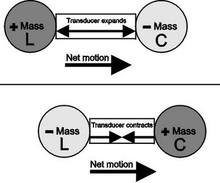 If this is your reactionless drive it would take the form of a device that can be located anywhere. In fact, it would be best positioned at the center of mass for the vessel it's pushing, so that thrust can easily vectored by rotating the engine.

Another reactionless drive being considered is an evolution of the lightsail. The concept, super simplified is a lightsail carrying it's own light source. 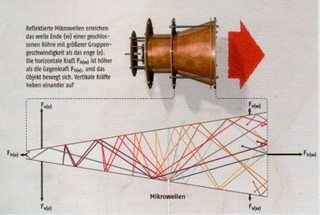 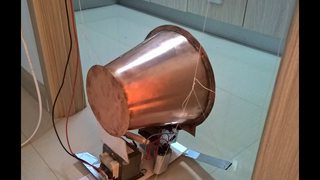 If this is your reactionless drive it would take the form of a device as pictured above. It can be located anywhere. In fact, it would be best positioned at the center of mass for the vessel it's pushing, so that thrust can easily vectored by rotating the engine.

I fooled around with an idea like this a few years back, and your aircraft will probably...look like aircraft, just without what we'd consider normal propulsion units.

The reasons are twofold: the first is that if you can leverage aerodynamics, you need less of the handwavium per vehicle, thus allowing more vehicles, or alternatively larger vehicles for the same amount of material, because you don't necessarily have to lift the entire mass of the vehicle just from the handwavium. In some operations carried out today by helicopters, or things where VTOL would be really useful, say military airlift or disaster response, you would likely see specialized aircraft that could do that, but for long-haul routes something like a normal aircraft would be most efficient if for nothing else than you don't need as powerful as a generator.

The second reason is that if for some reason your generator goes down, an aircraft that uses aerodynamics can still glide and control their descent.

47
Parachute equivalent when there is no ground
35
Which fast STL drive could not be weaponized or results in perpetual motion?
28
How could a lightning magic user fly?
7
Realistic hovering mechanism for my sci-fi drone
6
Can I make my drone swarm quieter or Silent?
2
Actual scientific requirements for human flight

35
Which fast STL drive could not be weaponized or results in perpetual motion?
10
Are the properties of "element zero" feasible?
1
Creating an infinitely powerful weapon that doesn't make you infinitely dead
2
What would be the positive and negative traits of a total matter to energy conversion drive?
42
How can a space station prevent docked ships from irradiating each other or the station?
3
How would time dilation affect a fleet moving through a black hole's event horizon?
6
How would an active Alcubierre Drive effect the shape of an ship's explosion?
7
Reactionless Drive WITHOUT Breaking the Universe?