So on real-life Earth, tetrapods have either plantigrade or digitigrade legs. In both cases, the knee bends forward, but in digitgrades the ankle joint can give the illusion of a "backwards knee". I am curious about how leg with a true backwards knee would compare performance-wise to digitigrade (and plantigrade) legs. I've included a labelled illustration to indicate how the body parts line up between the leg structures I'm proposing. 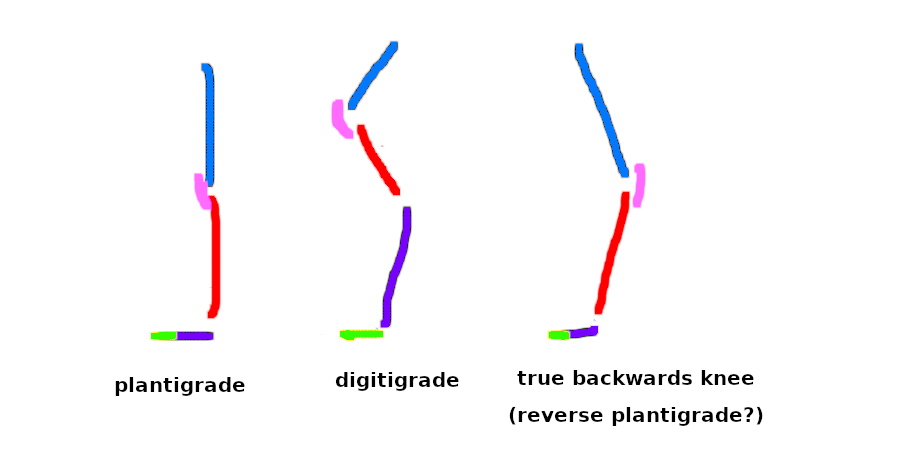 (As a footnote, the beings I'm thinking about giving these backwards knees to are horizontal bipeds like ostriches, not humanoids.)

It will be closer to plantingrade. You see, the digitigrade leg isn't just about the ankle working as a second backwards knee, it's an adaptation that diminishes the surface area of the foot that touches the ground and usually extends the limb, making the creature more silent and more efficient at running. In addition, a digitigrade leg is good for running usually due to its disposition of muscles and tendons, with the fastest animals usually concentrating the muscles on the upper leg and relying mostly on tendons for the lower leg articulations (this allows for more elastic movement, meaning smaller loss of energy and momentum while running, as well as making it easier to move the limb, as this disposition of muscles and tendons tends to reduce mass at the extremities, thus making the limb easier to move).

Your reverse plantigrade leg is basically a backwards leg with an inverted (for us at least). The creatures which do have such a limb orientation are bats, which all move on the ground in a quadrupedal way and aren't exactly gracious at it. The one animal I know that has this limb structure and is also known to run is the common vampire bat (Desmodus rotundus). These bats, due to their specialized lifestyle, have become well adapted to be able to move on the ground despite their extensive adaptations for flight. Let's look at how they run, yes?

From this we can see how these bats

1-run in a quadrupedal fashion. 2- rely mostly on their arms to run.

The main issue with the platigrade structure in your scenario is that it's structured to bend in a way opposite to the one in which the weight is being angled towards. If you ever tried to arch yourself backwards, you've likely noticed how hard it is to balance yourself. Such a arrangement of the legs by itself isn't necessarily bad (most bats have it, as far as I know, so it's clearly advantageous from them in some way), but for a bipedal ostrich-like creature this will be a problem. Not only they won't be nearly as fast or stable as an ostrich, they'll also not be as energy efficient, as once they "unlock" their knees they'll have to dedicate a lot of energy to balance themselves while running or walking.

Regarding the kneecap, its function is to help extend the joint as well as protecting it from impact, so I see another potential disadvantage at lacking it (ostriches, which are extremely adapted for running, have 2 kneecaps per leg).

Pay attention to the side view and what happens with the foot, ankle, and knee. As the planted foot goes underneath the body it starts extending, lifting the heel off the ground and then the toes giving a final thrust. After that thrust happens, the knee is bending allowing the toes to clear the ground, then the upper leg swings forward with the lower following and swinging forward to bring it in a direct line with the upper leg so the foot is forward of the body, in position to plant the heel for the next step.

The lower leg is acting like a pendulum. If there were no muscles there at all the walking motion would still work, as you can see with someone who has a prosthetic limb after an above-the-knee amputation where the entire step is accomplished purely by the motion of the upper leg. Because the lower limb is acting like a free-swinging pendulum, there's very little energy required on the part of the lower leg muscles after the foot is lifted in order to get ready for the next step. Essentially, as the upper leg swings forward the lower leg is swung forward for free. Then, as it's planted, the body travels over the top because of the motion of the upper leg.

The only major exertion on the part of the lower leg is that final toe-thrust. And note that the upper leg and lower leg are straight when it happens, allowing the force to be transmitted as efficiently as possible to the whole body. If the knee bent as that thrust was happening, there'd be an inefficient energy transfer.

That's why things like crouch-running or walking can't be sustained: the always-bent knee means less efficient energy transfer. A person in reasonable shape can walk continuously for hours. Someone forced to walk with their knees even slightly bent the entire time might be able to go a few hundred meters and probably be in agony by the end.

Now look at your backwards knee. The lower leg can't exploit the pendulum effect because it will be required to be pulled upward in order to swing forward. While the human lower leg swings forward and is stopped without muscular effort from going further by the knee joint, in the backwards knee you need muscles to straighten the leg on the step and keep it straight because the natural inclination would be for the joint to fold forward. The muscles are forced to be working all the time.

Now think about what happens on the last part of the step, as the toes generate the thrust as the hell is lifted. Well, how is the heel lifted? Again looking at the normal knee: just as the toe thrust is finished, the upper leg swings forward, causing the knee to bend. This shortens the overall effective length of the leg, allowing the foot to just clear the ground as it swings forward.

On the backwards knee, that can't happen. There's no smooth, energy-efficient way to lift the lower leg in order to clear the ground as it moves forward. The only way I can see it happening is that reverse-kneed biped would have to continually hop, pushing off hard enough so there's enough room to clear the ground so the ankle and knee can be bent to pull them up to clear the ground. This will inevitably result in a lot more energy directed at moving the body up and down instead of forward, thus a lot less energy efficient overall.

There might be one way around the bouncing torso problem, and that's if the reverse-kneed biped never actually straightened the knee, keeping it flexed continuously to basically act as a shock absorber to minimize the amount of upward thrust directed into the torso. But then that again runs into the energy efficiency problem: a significant portion of the force created by the feet and toes isn't being used for forward motion and is lost.

Going back to the point I made about a prosthetic lower leg and how in a normal human knee it doesn't require anything other than the motion of the upper leg in order to function, a prosthetic lower leg on the part backwards-knee biped would require some kind of powered mechanism in order to function. That demonstrates the difference in energy efficiency between the two: one can function without power, one could not.

Not the answer you're looking for? Browse other questions tagged biology xenobiology aliens .

26
Humanoids with digitigrade legs?
48
How could we time travel backwards without killing everyone with germs from the future?
3
Zombies, and true time limit
5
Would wide hips be a wiser evolutionary trait for digitigrade, biped humanoids?
9
The running-backwards Olympics
7
Does having a hind foot on a digitigrade legs make running slower?