Anatomy of men with beards

Lest anyone think I am making fun of men with beards, I should point out that I am a man with a beard.

A space-exploration team land on a new planet. They are surprised to discover that the local population appears to consist entirely of men with beards, buried up to their necks in sand.

As they descend from their craft, they are shocked to see the 'men' moving rapidly towards them making strange noises reminiscent of gnashing of teeth. The shocking part is that they remain buried as they move.

It turns out that these are not heads at all. They are the whole creature and completely on top of the sand.

I'm working on the hypothesis that these creatures have evolved to have this human-like appearance purely by chance. However I'm struggling with coming up with a realistic anatomy/physiology for them.

None of the visible parts need to have the same function as the corresponding feature on a real human - they just look similar. Close up you can see the difference.

For the sake of simplicity you can think of the planet as being roughly Earth-like. The creatures don't have to be very clever - they could be about as intelligent as an Earth insect. They obviously need to perform their version of bodily functions and need to eat something.

How can I explain these creatures? Their 'beards' and other features appear well-tended and they can move at roughly human walking pace.

There is a non-sentient, human-looking predator that evolved in the same area. It is similar to an Alien Xenomorph in structure, in that it can extroflect a bony "tongue" with which it catches its prey. It is an ambush hunter and has no beard.

One of its occasional preys is Aeschylus' Eagle, a bird-like intermediate predator that preys on rodents and head-sized animals such as the Beardo, a large turtle-shell insectivore.

Beardos are not turtles since they're warm-blooded, which means they need homeothermy and hair instead of a naked shell. They also evolved skin flaps similar to human ears to help regulate temperature.

Much as some butterflies do on Earth, the Beardo has evolved to resemble a predator's face so as to scare off hungry death on wings. The real eyes are actually in the nostrils, and the beard is a structure that is used for combing the sand and feeding, in a way similar to how whales filter-feed.

Well let's first begin with the basics: if it looks like the head of a bearded man, it must mean an advantage at surviving or breeding or at least that it won't hinder its survival.

My best bet on how a beard could remain looking well treated despite being exposed to the environment is that its not a beard, but more like a hairy growth. Given that this thing is fast for its size (it's the size of a human head, but can move at the pace of a human), as well as the clattering sound, I'd say it could be some kind of alien hybrid of an arthropod and a snail.

Upon picking the creature up, it's clear that the similarities with a human head stop at the creature's back. The beard is actually the main body of the alien, consisting of the had and thoracic region fused into a Cephalotorax, which is covered with a series of hair-like filaments. The cephalotorax also houses 3 pairs of compound eyes located mostly at the top of the cephalotorax (likely to spot aerial predators) and 4 well developed antennae, which indicate the animal relies more on smell and touch than sight to hunt. Upon closer inspection, their hairs are very similar to the nearby beard-looking bushes in the area, indicating how they might hide the "head" shell into the bushes while relying on their own hair-like growths to remain camouflaged, ambushing any unsuspecting prey that happens to get close enough for a strike.

The creature is an alien arthropod which seems to have appeared as a mix of sexual selection and camouflage. It's "head", being in fact a modified shell of sorts, is actually rather hollow, and serves for housing several of its organs, with the nasal cavity actually being functional. The "head"'s nose splits in a system of tracheas much like our planet's insects, which provide oxygen to the tissues and explain the creature's mobility. The "head"'s mouth is actually a large structure with several hard tooth-like structures, which hit against one another to form a clicking sound which the creature uses both to ward of predators and rivals as well as to attract females.

The ears of the "head" are surprisingly home to one set of long tentacles each. Upon closer inspection, the tentacles are much similar to an scorpion's tail, injecting a toxin that isn't dangerous, but is almost as painful as a bullet ant's venom, clearly working as a counter-measure against predators which try to turn the head over. In the underside of the head, 5 pairs of relatively short, yet powerful legs propel the creature at decently high speeds, allowing it to move as fast as a human. The chin region is actually an entry point through which the creature retracts its legs, head and abdomen (the "beard" enters the head) in case a predator arrives or if it feels threatened for some reason, remaining protected inside its hard head-shell.

Lastly, the heads eyes are actually fixed and seem to be looking up, being usually protected by a membrane that reminisces human eyelids, with said membrane also covering most of the head-shell. Upon further analysis, the cause of said trait seems related to the presence of aerial predators, to which a creature out in the open will react by hiding inside its shell, unveiling the eye structures and clattering loudly. Nearby creatures which hear the clattering will rapidly approach and expose their "eyes", creating a peculiar sight of heads staring up. The predators appeared frightened to attack, and have demonstrated similar reactions to tigers regarding behavior, in which they'll prefer to swoop down on prey which doesn't seem to be looking at them.

After reproduction, the females will dig holes in the ground, in which they'll deposit their eggs. Apparently the aliens which approached the researchers were all females, and were merely reacting to them being too close from their nesting ground. The soft skin-like membrane which covers the head and eye structures seem to have been sexually selected.

These creatures could have evolved from primitive worms that lived on the sea floor. They may have evolved limbs to crawl around faster. Eventually, predation will evolve in this world, and to survive, they might have evolved eyes at their front end, as well as transforming the frontal legs into antennae. They might also need to move faster, and so they may gain gills and a heart to pump blood around the body. They might also evolve to have simple bones in the body, to allow more leverage when moving. They may also try to avoid predators by moving up into shallow areas. If there were plants on land, they might evolve to crawl out of the water to eat the land plants. In order to breathe on land, they may evolve to have permeable skin like modern amphibians. They may evolve structures on their head to allow them to absorp more oxygen from the air. The rest of the skin might become thick and impermeable, to prevent dessication, whereas the breathing structures might retreat into the body, to protect them. They may also evolve a diaphragm to pump air through the breathing structures. They might move into a colder region, and evolve to become endothermic to cope. They might also gain insulating fibers around the body. Some might move into a desert. Due to the lack of food, they may adapt to shorten their body in order to reduce their size. This might continue until they appear to be just a head, with the antennae becoming the legs, and the bones of the body fusing into a skull. The heat may also lead to the area around the nares and eyes losing the hair. The nares might start pointing forwards, to avoid sand being blown into the lungs. To further protect the eyes and nose, they might curve their body up, so that the eyes face forwards, and they resemble a human head 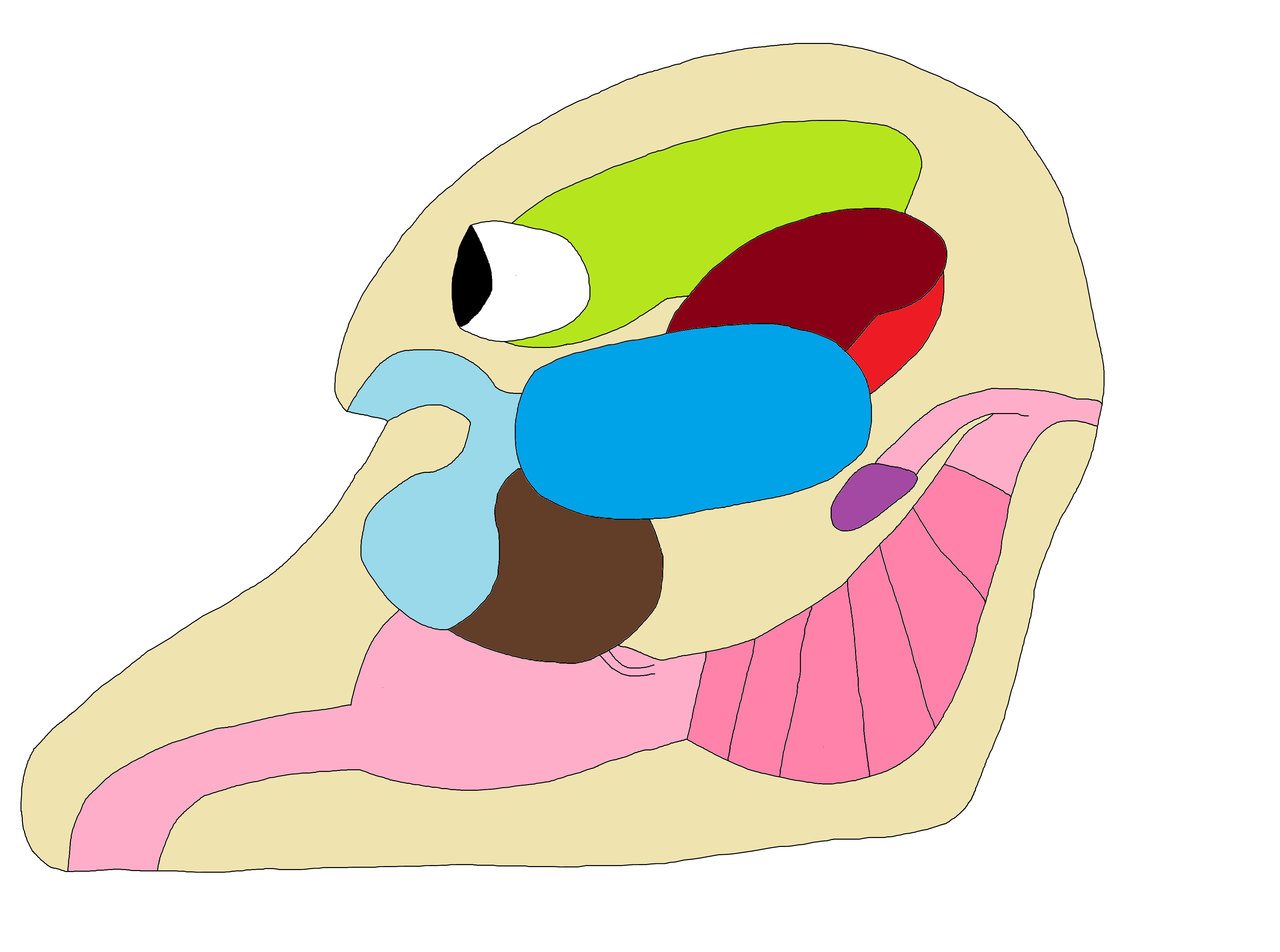 Not the answer you're looking for? Browse other questions tagged creature-design space xenobiology exploration .

5
How would society react to mushroom cities?
46
How would a tripedal animal walk?
58
Anatomically correct metalhead, part 1 - headbanging
23
Would a carnivorous diet be able to support a giant worm?
4
what kind of biology/evolution to create Xing Tian/Blemmye type of humanoid/monster?
7
Best weapon to be wielded by tentacled creatures?
2
Humanoid creatures with four “sticky” legs and eight eyes
2
Plausibility of Engulfer
4
Could these demons exist?