Which type of star would be best used for a Shkadov thruster to reach Andromeda as soon as possible?

I had Originally thought of using Nicoll-Dyson beams to propel probes and small ships from the Milky Way to as many galaxies as they can reach to turn stars in those galaxies into Shkadov thrusters to return to our galaxy.

The problem with Shkadov thrusters is they have extremely slow initial acceleration due to the mass of the star but once its around a billion years a star like our sun can have moved 35,000 light-years and will be moving at 20 km/s by then.

Nicoll-Dyson beams also have an issue of the beam spreading and being less effective propelling a ship once we get into inter-galactic distances. So I thought since they are arriving home on Shkadov thrusters they could also have left the Milky Way in the same way, at least your massive fuel source isn't millions of light-years away.

For the return journey the majority of stars will be red dwarfs due to their trillions of years life span but they are extremely slow moving stars due to their low energy output so a massive star may be the best bet as even though they are much more massive and harder to move their energy output is magnitudes higher but the major problem with these stars is their short life span.

What makes this calculation even harder is that the two galaxies are moving towards each other and it could be asked why bother traveling there when we will collide in 4 billion years but I would like to arrive in Andromeda long before the merger.

Is there a type of star that could get to Andromeda as a Shkadov thruster long before the merger or could even a Nicoll-Dyson beam using the correct star type propel a probe or small ship all the way to Andromeda in the shorter travel times I am after?

Edit: someone had done some calculations and they said it is not possible to reach Andromeda with a massive star, their calculations put our suns output as being able to reach in 20 billion years and a 10 solar mass star reaching in 1 billion years, both travel times being far longer than their life span but they did have an interesting suggestion of riding the supernova blast for the remaining journey.

You want to use light to push the star.

According to Wikipedia, the mass-luminosity relationship can be written as

If we assume that thrust is proportional to luminosity, the above can give us the dependence between thrust and mass and thus allow us to calculate the maximum acceleration we can get, assuming that in the non relativistic regime we have $a=F/m$

Finding the maximum vs M of the above function will give you the optimum thruster.

As a crude engineer I have plotted a chart of the acceleration vs the mass of the star, resulting in the following chart 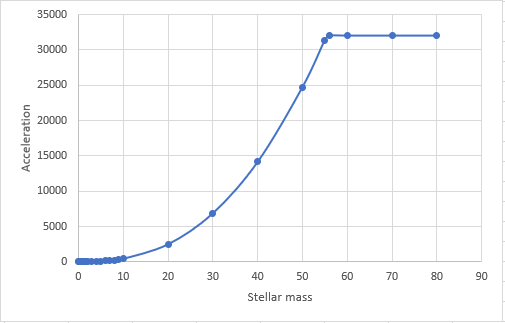 Which tells that the best thruster is a star with 55 solar masses. Bigger than that will not give you more acceleration.

If you are interested in maximum deltaV instead that in the maximum acceleration, you have now to combine the thrust with the amount of time it can act, given by the star lifetime.

conveniently computed into a table where $deltaV = a\cdot time$, you get the following

It is evident that the maximum deltaV will be provided by a star with 60 solar masses: a lot of push for a very short amount of time.

Very massive stars are not the best choice, for two reasons. The first one is that these stars tend to be quite violent during their lives, with strong stellar winds and sometimes energetic non-thermal radiation, like x-rays. Adding shielding to a megastructure like a Shkadov thruster might be possible, but it's a pain. Plus, after some millions of years, if the star is heavier than 8 solar masses, it'll explode in a supernova, and there's a very good chance that your thruster will simply be destroyed in intergalactic space.

The second reason is that for stars of above $2M_{\odot}$, the final velocity a star can produce throughout the entirety of its lifetime is essentially independent of mass, for a reasonable mass-luminosity relation.$^{\dagger}$ We can actually do these calculations by simply invoking conservation of energy, following the method of Hooper 2018, who applied to to propelling stars using energy gathered by Dyson spheres. The argument there is one of conservation of energy. The final velocity $v$ after a thruster has operated for time $\Delta t$ is, for stars of $M>2M_{\odot}$, $$v=0.034c\;\left(\frac{\Delta t}{1\;\text{Gyr}}\right)^{1/2}\left(\frac{M}{2M_{\odot}}\right)^{1.25}\left(\frac{\eta}{1}\right)^{1/2}$$ where $\eta$ is some efficiency factor. Let's assume our star will die before we reach Andromeda, an assumption I think should hold for all stars of $M>6M_{\odot}$$^{\ddagger}$. The lifetime of the star scales as $\tau\propto M^{-2.5}$, and so if we assume that $\Delta t=\tau$, we see that the mass dependence for $v$ actually drops right out!

Let's assume, then, that the mass of the star is unimportant for the stars of the masses we're interested in. I then argue that we should pick a star in the range $6M_{\odot}<M<8M_{\odot}$. Why? There are a couple of reasons:

In short, pick a star of moderate mass, and you'll reach Andromeda efficiently and, most importantly, without having been incinerated by a supernova.

$^{\dagger}$L.Dutch notes a break in the mass-luminosity relation for $M>55M_{\odot}$, though I'm not sure that this is widely-used, and at any rate, these stars are extremely rare.

$^{\ddagger}$I got this value by assuming that all stars of $M>2M_{\odot}$ reach terminal speeds of $v_{\text{max}}\approx0.045c$ (which you can see by a quick calculation using the above formula) and would have mean speeds of approximately half that. The travel time to Andromeda is then roughly 114 million years, and a star of mass $M=6M_{\odot}$ would leave the main sequence after that time - I neglect main sequence evolution.

Instead of using a Shdakov thruster, use... The Caplan thruster! A hypothetical megastructure that essentially acts as an immense rocket, shooting stuff one way to propel yourself the other way. This requires a basic Dyson swarm first. Since your civilisation can construct Shdakov thrusters only through probes, I'm going to assume that they have the capability to create a Dyson swarm.

A Caplan thruster is a space station-like megastructure pointing towards the sun that draws on energy from the Dyson swarm and gathers solar matter, powering nuclear fusion which ejects particles from its 'thruster' at around 1% the speed of light. A secondary thruster fires a second jet of particles at the sun, pushing it forward so the power of the primary thruster doesn't cause the Caplan megastructure to impact the Sun.

To quote from the paper, which I will link.

To maximise the acceleration, or a, you must increase m and (v) without m being large enough to impact the lifespan of the star.

The Caplan thruster uses immense electromagnetic fields to gather hydrogen and helium from the sun, since it requires millions of tons of fuel a second. However this sparse interstellar matter is not enough to power the Caplan thruster alone. This is where we will use the Dyson swarm. The swarm will focus sunlight onto the star itself, heating these areas to incredible temperatures and causing millions upon millions of tons of matter to rise from the star, which will be funneled into the Caplan thruster using its electromagnetic fields.

The helium and hydrogen are separated, where the helium is used in thermonuclear fusion reactors, with primary thruster expelling radioactive oxygen at a billion degrees. The secondary thruster works by using particle accelerators to fire the collected hydrogen back at the sun, balancing out the Caplan thruster to prevent it crashing into the surface. The star can be moved 50 light years in only one million years.

The use of stellar matter will also extend the lifespan of the star, since smaller stars undergo fusion at a slower rate.

If we assume a perfectly efficient Dyson Swarm, in only 5 Megayears the star could reach velocities of up to 200km/s as opposed to the 20km/s that Shdakov thrusters reach after an even longer period of time, however the mass loss rate limits the usage of the star to 100 megayears of use before the star becomes impacted enough as to limit performance and shrink.

It's more viable to redirect the star onto the trajectory you wish for it to travel, firing the Caplan thruster for only 10 megayears in that direction.

Link to the paper: link

L.Dutch's answer is a good start. If you just want to find a natural star to ride along with, something in 55-60 solar mass range is fine. And indeed, that is a good place to start....

But you can do much better than just finding a natural star and riding along. After all, you've already got the technology to build a Shkadov thruster, and you've got millions of years and a whole stellar system of resources to continue developing.

Stars increase in luminosity throughout their lifespans, as the core becomes more compact and fusion gets faster. The final supernova is kind of just the endpoint of that continuous process... and kind of a huge waste, as well.

If you can lift material off the star as it ages during the journey, you can arrest the luminosity increase and extend its lifetime. That mass then has a variety of uses. You can use it as reaction mass to improve your propulsion efficiency and get to Andromeda faster. You can use it to slowly build a companion star that will provide additional power output and improved thrust. Or you can save it to feed back into the original star later when it starts to actually run out of fuel.

4
Gravitational lenses for focusing giant lasers
4
What would the sky view be like of a final stage massive merged galaxy?
10
What percentage of stars would need to become Shkadov thrusters to move the whole galaxy?
2
Could a galaxy of Nicoll-Dyson beams hit a single target?
6
How could a galaxy be altered to house hundreds of thousands times more Stars?
4
Is a particle beam the best method to fire a black hole at a target?
2
How many Ultra massive black holes should be added to a map of known black holes?
6
How would a K3 civilization collect the majority of the universes available mass in the form of Intracluster gas?
9
What speed could a Nicoll-Dyson beam propel a solar sail ship to?
2
Matrioshka brains with stellar engines?