Does my military make much sense?

For some context, my world takes place in the year 2027, just close to a two decades ever since the Black Flu pandemic ripped across the human race and the zombies initiated the Great Collapse, leading to the fall of modern civilization. The US Government was able to somewhat survive and in 2009, under the leadership of President Obama, the surviving remnants of the federal government and US military liberated Washington, DC from both zombies as well as hostile militias, bandits, terrorists, etc. As of 2027, the District of Columbia has expanded in size and has a population of 810,000 people (might jack the number up to a million).

Anyway, now that you have some insight, here’s my military:

The United States Garrison (U.S.G.) also referred to as the U.S. Garrison and simply the Garrison, is the modern post-Black Flu incarnation of the old pre-Black Flu United States Armed Forces. Established on November 11th, 2010, the United States Garrison is by far the strongest, most powerful, advance, well trained, disciplined, and experienced military in all of North America (if not the entire Western Hemisphere) and is responsible for conducting land, aerial, naval, expeditionary, and amphibious warfare. The strength, power, experience, and iron discipline of the U.S. Garrison has made it the premier military of North America. Due to the numbers and resources that it possesses, the U.S. Garrison has spearheaded combat operations, peacekeeping missions, and humanitarian aid services throughout the East Coast while also working to diligently defend the District of Columbia from hostile invaders. The U.S. Garrison was created after President Barack Obama signed the National Defense Reorganization Act of 2010 (NDRA). The Garrison was formed under President Obama’s tenure due to the need to unify the scattered resources and manpower of the five branches of the old U.S. military in order to more strategically and productively utilize the limited resources available.

The Garrison is divided into three main cohesive operating components each headed by a General (who reports to the Commander General). These three components of the Garrison act together in a combined arms fashion akin to a Marine Air-Ground Task Force/MAGTF that compliments one another when conducting operations. They are the following (NOTE: the reason why I’m using Marine Corps and Army unit organizational structure names for non-land warfare forces is for ease of organization and structure):

• Defend the territory of the District of Columbia (and by virtue/in spirit, the United States) from all hostile threats, foreign and domestic

• Preserve and maintain law, order, peace, and stability within the District of Columbia

• Assist in reuniting the United States of America

There's a big difference between owning and operating

I see two different questions here. The first is is it possible for the DC government to own this pile of military hardware? The answer is yes. We have room for all that hardware. The ships may have been at sea during the insurrection and out of reach of the enemy forces. One radio call could have gotten them to the greater DC area where they could drop anchor. I live in the District and we have enough runways between our civilian airports and military bases that we could park a whole bunch of aircraft. Between the National Guard armory, military bases, and law enforcement buildings, we could fit tons of other kinds of weaponry. Getting the stuff here and finding room to store it isn't a problem. After all, the United States already has places where we store ships and aircraft for decades at a time with minimal staffing. Davis-Monthan AFB (shown below) has 4,400 aircraft managed by the relatively small 309th AMARG. 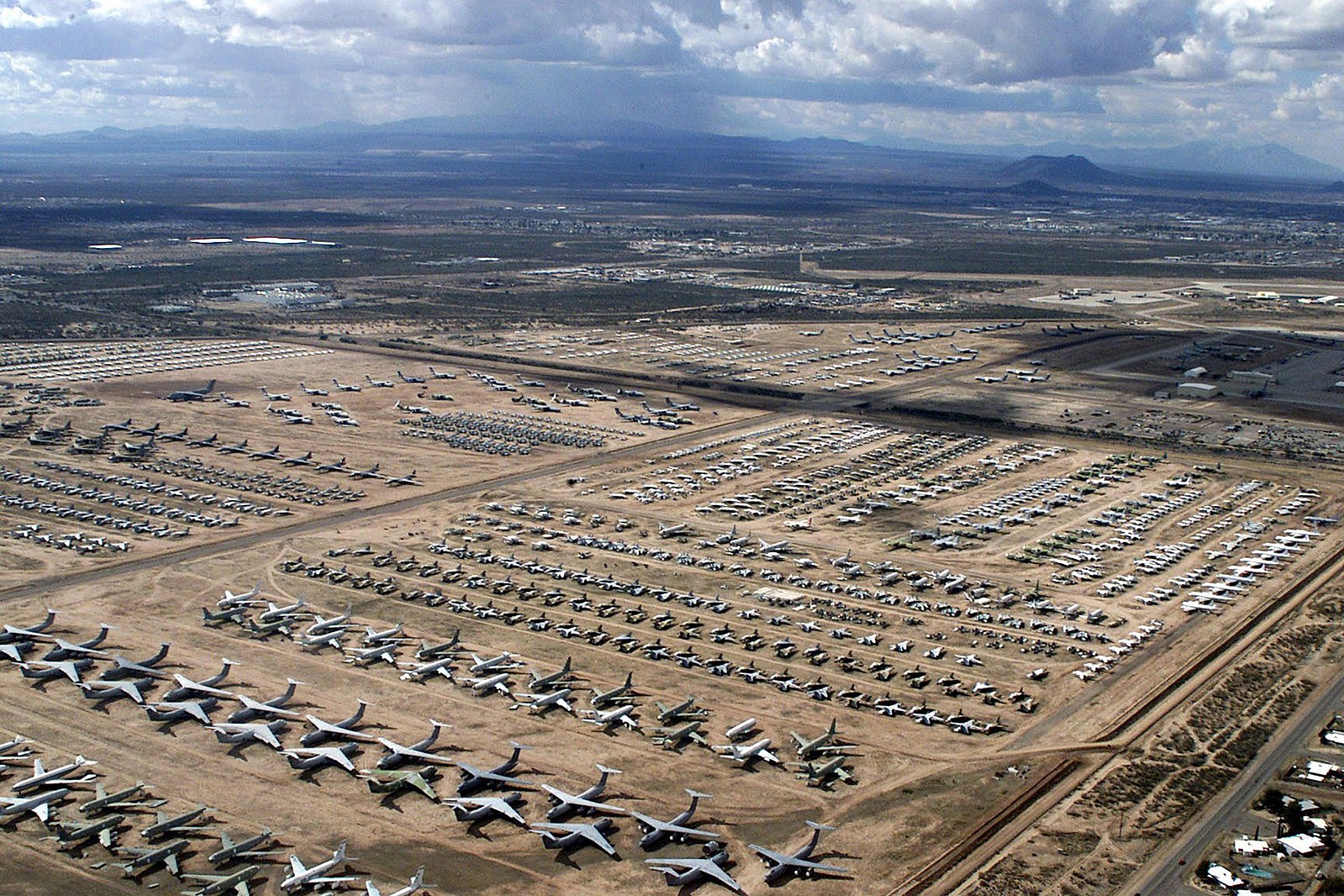 Here's the more important question: could a nation-state of fewer than one million residents support the deployment of this kind of firepower? The answer is a definitive no.

Let's start by looking at your aircraft carrier. RAND analyzed aircraft carrier maintenance cycles in real world conditions and found that carriers are only deployed 19% of the time (shown in green in the chart below). As RAND puts it, "These ships, which are among the most complex weapon systems the Navy operates, require continuous and regularly scheduled maintenance."

Supporting force readiness is a big job. Check out the org chart for the 50,000-employee Naval Sea Systems Command. Your smaller navy won't need quite as many divisions, but you'll still need a lot of experts in different fields to support a nuclear carrier and other large ships. 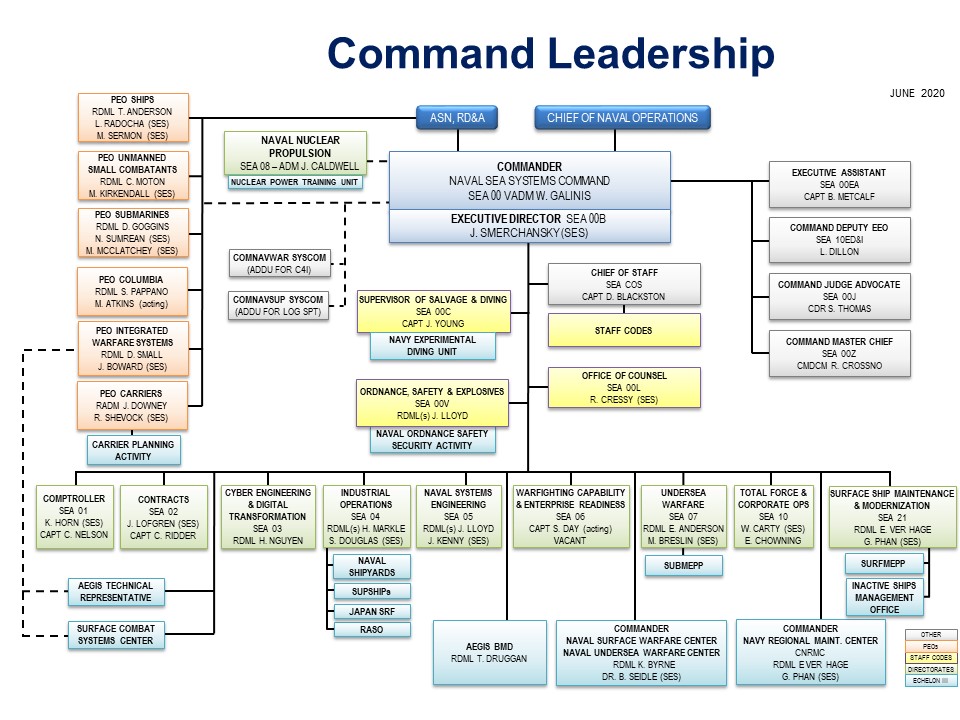 Your aircraft and ground vehicles also require maintenance and support. According to this analysis, every flight hour of the F-35 could require 50 people-hours of maintenance. Bradleys and Abrams need less maintenance but you'll still require specialized mechanics and facilities to keep them operating.

Beyond the hands-on maintenance, repair, and training requirements, you'll also need to manufacture ammunition and replacement parts and you'll need fuel and electricity. I'm reminded of this answer to an unrelated question where the author listed all the industries you need just to build one rudimentary computer.

Realistically, 999,999 of my neighbors and I could support a handful of patrol boats, a few easy-to-maintain aircraft, and a number of heavy vehicles.

Clearly you love the military and all their sweet stuff. And you want what is essentially the US Military to be fighting they way they do now in a near future post apocalyptic environment. That is what you need to have! That is where your passion is.

To keep the sweet military you just need a bigger population. And fortunately you can have it. I think you are keen on DC too, so keep that. But expand their area of control to be much larger. Large enough to have a population that can support a standing army of the size that you want to work with.

An army with the stuff you list would have no trouble defending a reduced sized US. And you will want them to be battling equals: comparably armed warlord mini-nations, zombie hordes, kaiju - not rinkydink militias.

I do think it would be fun fiction to have your army own military assets they don't really know how to use or maintain. Having your tanks fall apart as you are trying to use them makes for exciting fiction.

LOGISTICAL HANDWAVIUM: This scenario requires a LOT of handwavium to justify, especially without adding some really extraordinary tech.

Not the answer you're looking for? Browse other questions tagged internal-consistency science-fiction warfare weapons military .

115
How long would it take to create a Windows 1.0 capable machine from complete scratch?

2
Military Structure/Chain of Command (Army)
22
Fighting a dragon with modern military units (or Smaug vs. a MEU)
4
How big should my particular military be under post-apocalyptic conditions?
4
Would this presidential directive be practical to implement?
6
In a general sense, would it be better to equip troops with plate carriers, body armor, etc. if they’re fighting against zombies?
6
What should my military’s combat-utility uniform be?
4
How practical would it be to have VTOL aircraft be part of a military in a post-apocalyptic dystopian setting?
4
How effective would the White House serve as a fortress or makeshift Forward Operating Base/FOB?