Could my Bicorn exist?

Its being a type of ungulate, some characteristics of my bicorn include:

Given these characteristics, what species could the bicorn have evolved from, and what evolutionary pressures would lead to such a creature? 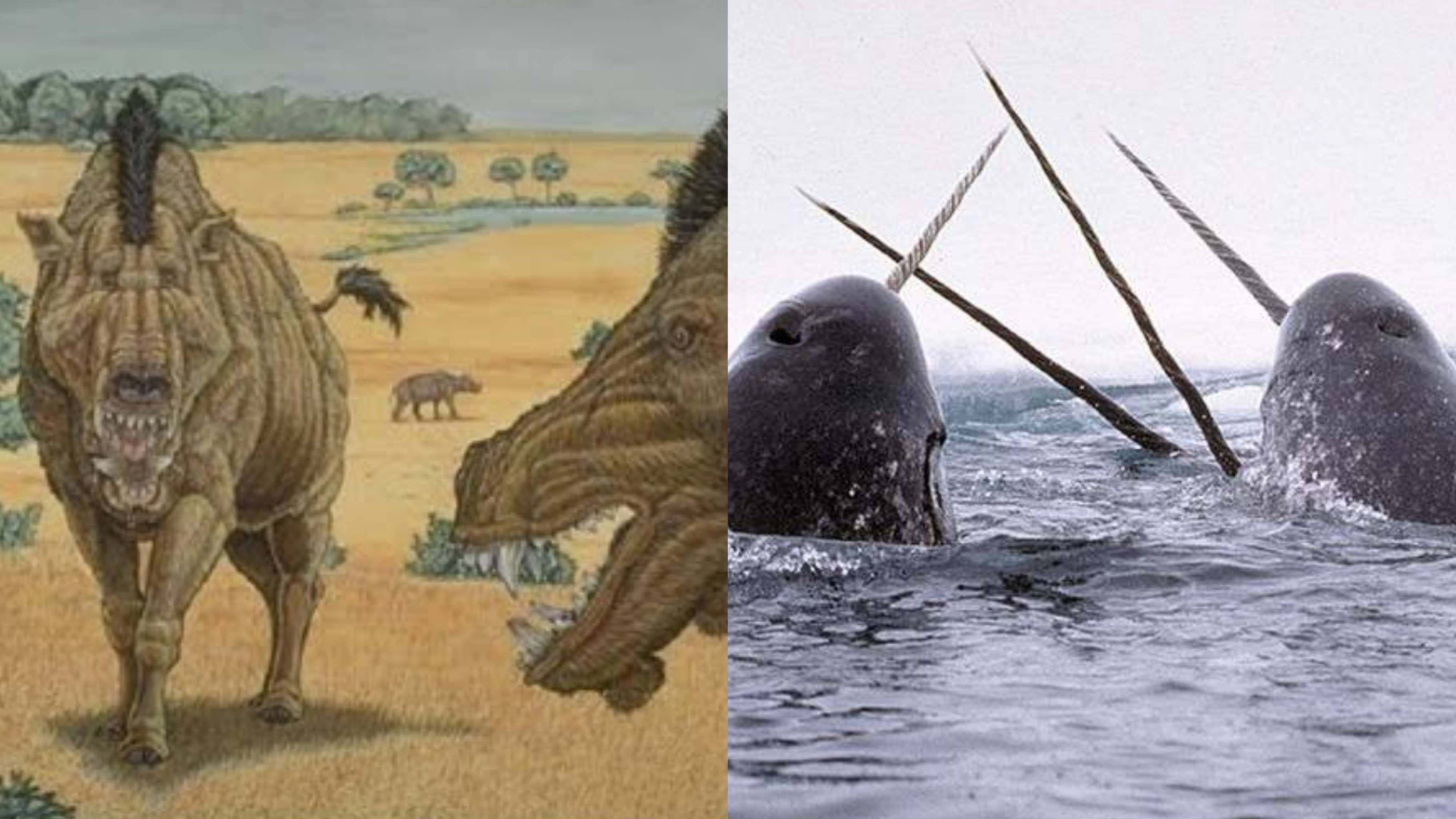 Hell pig+ Narval= horse looking carnivorous pig with two teeth protruding up and existing from the "head" like a narval, which makes them look like horns. Them being teeth will also result in desired cone shape of an unicorn horn.. Real horns are never that shape.

Also, every animal on earth is a carnivore if they get the chance to eat meat.... Not every animal is a predator though.

You can see cows, horses, sheep, ducks or even bunnies eating flesh but they never actively chase their prey down or kill it. And I'm not talking about insects, those animals I listed eat actual "steaks" if they have the chance.

Stomach acid can digest anything, even metal, any animal which posses a stomach has no problem being a carnivore.

The distinction is that a real predator can kill its prey while a carnivore is just able to digest animal protein... And being most protein made from plant proteins combined to make flesh, then yeah... Pretty much anything with a stomach can digest flesh.

Ok so first problem, those horns. Many people here have mentioned horns are a patterned herbivorous trait, but they seem to forget that many reptiles have at least ornamental horns. This is none the less not a great problem, as a horned, herbivorous ancestor developing an obligate carnivorous lifestyle isn’t far fetched (I would say this is the most likely path).

1: I cannot count a single vertebrate that impales prey. Shrikes don’t count, as the impaling implement is not on their body. Even insects that impale (true bugs) do so to inject venom and suck up nutrients - your bicorn gains neither benefit. An impaling implement needs a grasping or dragging implement to un-impale the prey item - can’t do that with hooves. There isn’t much benefit to the fitness of an animal to evolve an impaling horn, especially above and out of reach of their mouth. Side note: incase you mention them boar and other tusked animals, as well as likely ceratopsians and carnotaurus, do not impale but gore - usually in defence or territorial dispute.

2: Inefficiency. Simply put, when puncturing something, two heads are worse than one. Cutting or puncturing effectiveness increased the less surface area is applied. The second horn is redundant the instant the first makes contact, and may even inhibit penetration distance. Redundancy and symmetry is usually important, hence why a spider has two fangs and likewise Carnivora have two canines, but less is more with puncturing.

Herbivores have teeth adapted for consuming plants. A horse specifically has large incisors and specialised molars, with minimal premolars and no canines (with exception to mature males for fighting) with a massive gap between the incisors and molar row. This poses a problem for eating meat. Canine teeth are needed for grasping, puncturing and tearing meat, hence why mammalian carnivores possess such developed canines. Specialised sheering premolars and molars (look at dogs) are also needed for shearing and slicing meat. A grazing animal can technically chew and digest meat, but not efficiently. Also those big incisors aren’t as useful with meat.

I mentioned before, but I believe a grazing, horse-like ungulate, likely with mating rivalry to evolve horns, is the likely ancestor (disregarding the lack of horns in horses). Let’s say an environmental change inhibits the growth of the ungulate’s main food source, causing them to diversify into omnivorous feeding and developing small animal hunting while still being hunted by their current predator.

As environmental change goes on, the plant life dwindles drastically until the bicorn population reaches near-extinction, causing their predators to starve and die off. Surviving population bounces back slightly due to loss of predation but still dwindles, evolutionary pressure favours their recent predatory adaptions - bicorn becomes obligate carnivore (or more likely opportunistic omnivores).

Along with their new carnivorous niche, their eyes angle forward on their face to stalk prey and allow better depth perception. Their pupils lose the horizontal slit (adapted for scanning the horizon for predators) and adapt a circular or vertical slit better suited for sighting prey.

Because of the less-than-optimal method of hunting that is impaling, the bicorn likely uses sweeping motions to gore prey rather than puncture. This means the horns should be thick and relatively short to deal with the stresses.

Alternatively, if the horns are adapted from male rivalry, perhaps in hunting the pack male/males perform the job of puncturing the prey item while the hornless females herd and pin it down. as well as performing the job of removing the prey item from the male’s horn.

I don’t think this is a particularly likely sequence of events, and it is quite simple, but it’s mostly plausible.

Apart from the horns, everything seems fine enough. Eagle like eyesight could be a problem, but since it has already happened and we have similar occurrences, especially in tarsiers (big eyes fixed in skull that is), it doesn't sound too crazy. Horses are already very social animals, so I don't doubt this creature (likely a species that branched not too long ago and adapted for a carnivorous lifestyle) could demonstrate pack mentality. Their horse-like attributes are all completely reasonable by this approach as well. Regarding the carnivorous lifestyle: also not overly crazy to exist in a hooved animal, since it's already happened before, although in a different group(see Entelodons).

The main issue here seems to be the flexible neck. It's not that it's impossible for them to possess it, but apparently, flexibility usually implies less strength, with most predators that actively use their necks tend to have stronger but more rigid necks to deal with the necessary force. Your bicorn will naturally need a less flexible neck, as it will use solely its teeth or, as you'd prefer, horns to do the job. Either of these strategies will require a strong neck, especially with the horns strategy (you'll need a neck that can withstand a fair amount of force if the bicorn is ramming its head into other creatures).

Finally, the horns: yeah it might be possible. Although it's an uncommon trait in most modern, mostly carnivorous animals, we do have one instance of a strict carnivore with horn like structures in its head: carnotaurus. However, though it did have horns and its speculated they might have used it in hunting, they seem to have been mostly used in battles against other carnotaurus during courtship, using them to shove each other using their matches (some studies seem to indicate their heads weren't structured to withstand rapid, powerful blows). So I'd see your bicorn having short, bony horn-like structures above its eyes, using them mostly as protection and in courtship, as well as a potential indicator of a healthier, stronger mate (bulkier, more capable of shoving its rivals away).

Summing up: the main issues seem to be the use of horns for hunting and impailimg prey (would require a lot of strength and could be detrimental for the carnivore, with the risk of rotting flesh getting stuck in its head and attracting diseases) and a flexible neck (a predator that apparently relies so much on its jaw will need a stronger, bulkier and therefore more rigid neck). Other than that, your bicorn doesn't seem overly absurd (perhaps regarding its eagle eyes, but still not overly impossible that it evolves similar structures). It's true that no carnivore with horse like hooves has existed and pigs, entelodon's relatives, are omnivorous. But still doesn't sound like something completely impossible, just not probable.

You only have one problem forward facing horns, to hunt with these your prey would need to be standing still, which never happens, as soon as your prey tries to run away or dodge the horns become useless. So unless they have another way to kill prey they will starve.

everything else is fine, a hoofed horned predator is completely possible, predators have evolved from herbivores thousands of times. All you need is a lack of other predators.

18
Anatomically Correct Boar Troll
7
Could a tetrapod Pegasus exist?
2
Could my Sirens exist?
7
Could my Ents exist?
4
Evolution of werewolves
0
Could my Cipactlis exist?
4
Could my Kangaroo-Monkeys exist?