Is it feasible to use light as a transmission vehicle?

Let's just say I'm no scientist, so my understanding of these things is all surface. Having said that, I don't write hard science fiction. But I'm not quite as "magic-like" as Star Wars.

My understanding is that light waves and electromagnetic waves are the same thing. Radio, ultraviolet, x-ray, gamma - all variations.

What I want to do is two things:

Again, not exactly looking for hard answers. I want to be able to explain these concepts well enough that they move the story forward without being too "magical" or hard to believe.

EDIT: Bolded the point about the ansible as mentioned in my original question. Maybe I am trying to extend that idea by putting in a framework for how that might work.

You are right in that radio waves, microwaves, visible light etc. are all electromagnetic waves.

The only major difference between them is wavelength and frequency. Radio waves are long and have low frequency. Dangerous radiation (UV, x-rays, gamma) waves are short and have high frequency.

The speed of such waves is a function of wavelength and frequency. However as nature has it the product of both tends to remain constant. No matter what kind of radiation you use, their speed in a vacuum is fixed at $c$ (about 299,792,458 m/s).

If you wish to communicate across interplanetary or interstellar distances, and that speed is not a problem, then the choice of frequency should be based on which frequency tends to propagate best, i,e,: which one will have best signal-to-noise ratio. You are looking for a range called the water hole:

The waterhole, or water hole, is an especially quiet band of the electromagnetic spectrum between 1.42 and 1.67 gigahertz, corresponding to wavelengths of 21 and 18 centimeters, respectively. It is a popular observing frequency used by radio telescopes in radio astronomy. (...) The strongest hydroxyl radical spectral line radiates at 18 centimeters, and hydrogen at 21 centimeters (the hydrogen line). These two molecules, which combine to form water, are widespread in interstellar gas, which means this gas tends to absorb radio noise at these frequencies. Therefore, the spectrum between these frequencies forms a "quiet" channel in the interstellar radio noise background.

If you wish to communicate across galaxies, though, or from one side of the galaxy to another, that speed is a problem. You will need to communicate with FTL means. Sci-fi has a staple trope called the ansible:

An ansible is a category of fictional device or technology capable of near-instantaneous or superluminal communication. It can send and receive messages to and from a corresponding device over any distance or obstacle whatsoever with no delay, even between star systems. As a name for such a device, the word "ansible" first appeared in a 1966 novel by Ursula K. Le Guin. Since that time, the term has been broadly used in the works of numerous science fiction authors, across a variety of settings and continuities.

Now I want to send something back other than just data (I think). Let's say I want to send back some sort of executable code (roughly) back down the pipe, that can infiltrate a computer system and "do stuff."

Executable code is data. If a computer is ready to accept some payload and the software in it is ready to execute whatever comes, you then you have what you need. Your browser is doing it right now, executing javascript from sites such as worldbuilding.stackexchange.com.

yes. And even more so if you're a digital person as you can just use the light, provided there was a receiving station at your destination, to travel at a cost that's vanishingly small in comparison as to using a ship.

as a matter of fact, I am currently writing a book that's about invasion of Earth by digital people from other star systems. That aside, if you have a dyson sphere, you could very much use light as the preferred medium of communication or travel if you're a digital person.

so light itself may very well be the vehicle of travel for digital life, which may in fact actually be the dominate form of life in the universe along side machine life.

this itself may be a leading solution to the Fermi Paradox.

Below is a picture of a signal lamp from Wikipedia. Such lamps are used to transmit Morse code messages between ships while maintaining radio silence. Any light source that can be turned on and off can be used in a similar manner, even across tremendous distances. The speed of light still applies, but you can theoretically send messages across galaxies. If you could cause a star to flash (possibly by blocking its light in the direction of your recipient) you could send Morse code messages. And yes, Morse code can be used for computer programs. The farthest star we've seen with current tech is about 9 billion light years away. 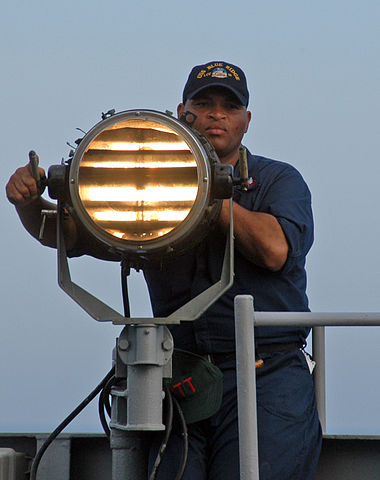 Light already is used as a transmission source. Take a look at Fiber Optics. This is a far more controlled environment, but I'm really just trying to show the idea is certainly possible.

The problem here that you're going to run into here is the speed of light. The speed of light is 299 792 458 m / s. That might seem really fast, but distances in space are often measured in light years which is the length light has traveled after a single year. That distance, according to Google, is 9.461e+15 meters!

To put that into a little bit of perspective, the nearest star system to ours is about 4.22 light years away. That means a transmission sent from here would take 4 years to get there! Note that you're not running into a particularly slow frequency here. That is to say, using another frequency probably won't help here. You're running into the fact that the medium itself isn't moving any faster than that.

Less drastic is inside our own solar system, though even still it's not terribly real time. Take the distance of Earth from the Sun. Even though it's considerably closer than the nearest star system, it still takes sunlight 8 minutes to reach Earth. Anything further than that (like other planets, or across the galaxy) will take even longer. Still a lot better then 4 years, but not terribly great.

Another problem with you'll run into is that while space is a vacuum in terms of matter, between the numerous stars, it hardly a vacuum in terms of light pollution. Your society would need some way of reliability determining what is a transmission and what is noise from some star.

As for wormholes, it doesn't seem to help:

"If you're in a wormhole, you don't go faster than light — you're going at normal speeds, but your visualization and stellar navigation are all gone [because] … there are no stars to navigate by."

The iconic image of stars streaking by a spaceship view screen popularized by franchises like "Star Trek" and "Star Wars" simply isn't accurate, said Davis. "The light that goes through the wormhole gets distorted … you're going to have a very weird visual display."

This deals with putting a human through a wormhole, but I'd imagine the principle is the same.

At the heart of Davis' paper is the principle — supported by rigorous scientific theory — that faster-than-light travel is a real and even tangible possibility. The last section of the paper proposes nine "next steps" that would push the field toward engineering prototypes and other practical tests of faster-than-light theories.

So I'll say it's a maybe. It certainly seems plausible enough for your purposes.

A couple of things worth noting before I move to question two here is that while different light frequencies won't necessarily speed up your transmission, you could designate certain frequencies to certain channels similar to how radio waves work.

The other thing I would like to mention is what if your society discovered some other medium very similar to light, but actually moved many times faster. This would theoretically remove the distance and possible pollution problems while keeping the desirable properties of light. Just a thought.

As for question 2, I would point back to Fiber Optics. Digital communication is certainly possible in a medium such as light. Consequently, computer code and other things like that would be possible as well.

Propagation speeds aside (covered in other answers), different frequencies/wavelengths offer pretty much different data rate - the amount of information one can transmit per second.

Shannon theorem is the theoretical base and it requires some frequency bandwidth and some signal to noise ratio. One can't have much of a bandwidth in low frequencies.

And the noise - you need to outshine the nearby star in your frequency band (at least in the direction of the receiver). Our Sun is rather powerful noise source for any frequency from the lowest measured all the way to x-rays. For higher frequencies, it is rather quiet. Other stars are no different. You also have some rare gamma-ray sources here and there all over the sky.

The upper limit of usable gamma rays is ~80TeV (rather high, but still a limit). The space is rather opaque for higher energy photons because of the photon-photon scattering against the microwave background.

Quantum entanglement could be used to explain instant communication between two devices separated by any distance.

ELI5 = Two electrons can become "entangled" where they instantly mimic the other. We can't currently do anything to an entangled electron without breaking the entanglement (except observe it? (I think some blokes recently won a Nobel prize for this?))... but it stands to reason that this might become possible in the future. This could be used to send data between two locations. They have to be together when they become entangled... then they can be separated by any distance. It would make sense that a web of entangled communcations HUBs would be established.

Not the answer you're looking for? Browse other questions tagged science-based science-fiction communication faster-than-light .

10
How could an multi-world economy exist if FTL communication, but not travel, existed?
10
Deaf aliens interpreting sound waves
4
Break-even distance for sending data at c versus sending an FTL hard drive?
34
Which current networking protocol would be the optimal choice for very small FTL bandwidth?
2
Are (near) instant data transfers feasible on an intergalactic scale?
11
A plausible explanation for the "ansible?" - FTL communications