Can the dunkleosteus jaw model work on a land predator?

Dunkleosteus terreli might be the most well known species of placoderm by general media. Having inhabited the devonian seas, this impressive predator possessed an unique four bar linkage jaw mechanism, which allowed not only for powerful bite, but also for a very quick opening, fast enough to essentially creating a suction force that would drag prey closer to its fearsome Jaws. This creature could fully open and close its Jaws in less than a second, and had a bite force rivaling that of modern crocodilians and the T-Rex in terms of pressure.

Given this prehistoric fish's incredible capabilities, I'd like to use a similar concept to its plated Jaws and four bar linkage system. The issue here is that what allowed the placoderm to employ such a system was the lack of a neck (skull moves while the body armor stays still), which is not the case of my land predator, which is a long snouted, bipedal tetrapod around the size of a deinonychus. To try and solve this issue without making the creature neckless, I tried to make use of 2 bony crests in the back of its head and around it's neck, which would then serve as the anchoring points for the necessary muscles and move along with the lower jaw (they're not directly connected to one another, as to allow for a greater degree of up and down neck articulation, but that can be changed Should it make the system more efficient), as seen in the rough sketch below: 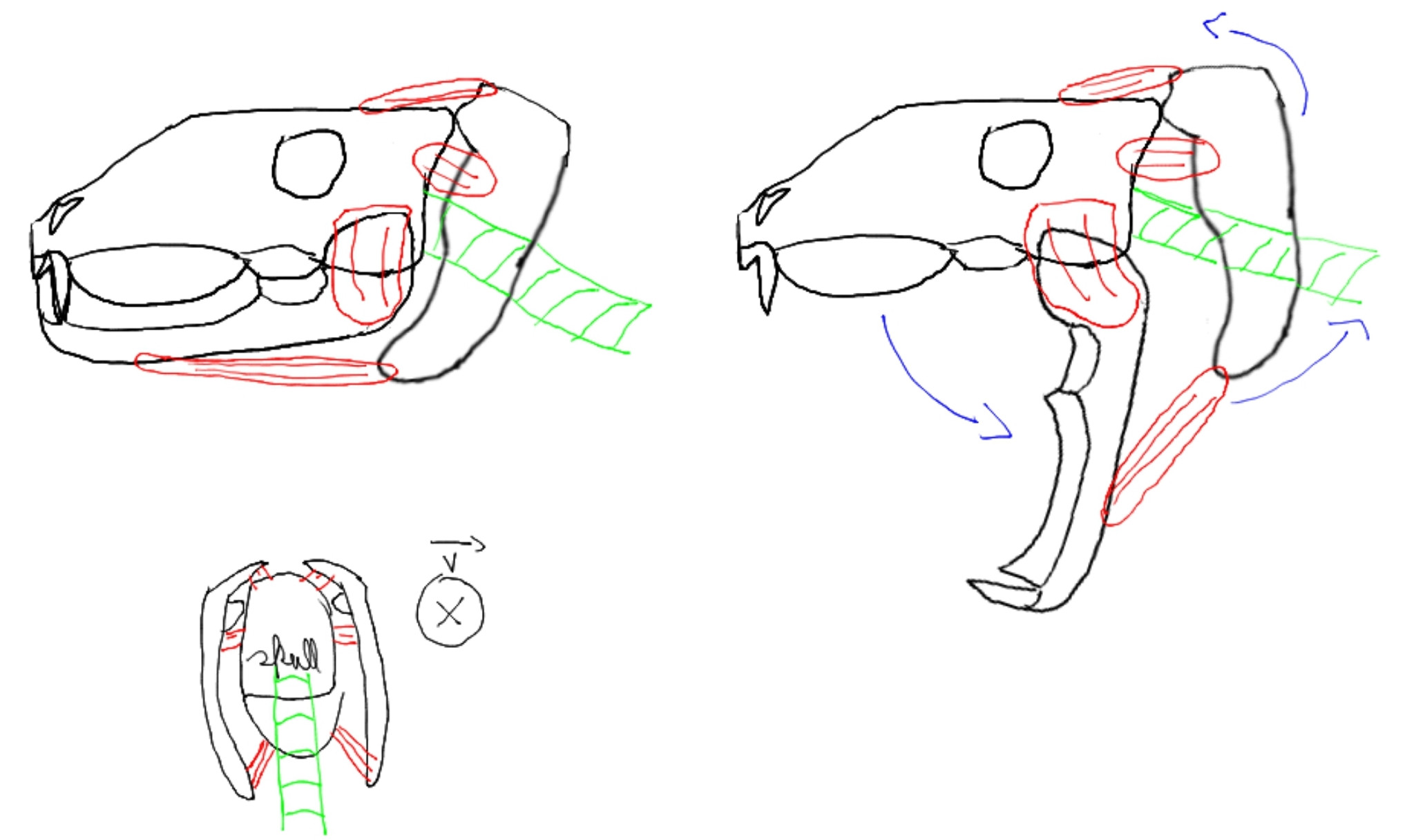 red indicates the location of the main jaw muscles, black indicates the skeleton, green indicates where the tree neck vertebrae would be, the 2 crests are represented in the crude sketch below (Sorry if it's rough, I don't have much experience in drawing and couldn't draw the back facing structure properly).

The reason for this landbound animal to need a powerful bite and fast opening is it's planet's wildlife, which, due to the denser atmosphere when compared to earth, is largely composed of gliding and flying creatures somewhat similar to pterosaurs, which mostly live and rest near the top of large trees. The dunkle predator in question makes use of its camouflaged skin to climb the trees mostly unnoticed, approaching its prey. Once it's as close as possible, it extends its 20-vertebrae, relatively long neck like a snake or a heron, performing the Jaw cycle and chopping off a limb or other body part of its soft prey, allowing an immediate amount of food and usually making the victim easier to catch. Due to its bright colored mouth and tongue, used to scare off predators, it usually keeps its jaw closed until the last moment (the atmosphere might be denser, but it's not nearly dense enough for the mouth opening to provide a strong suction).

My question: Could this attempted variant of a four bar linkage jaw arrangement still be functional? In other words: could it allow for a similar bite force and opening speed as seen in a dunkleosteus from the same proportions? I'd also be glad if an estimated maximum gaping angle possible for this jaw model was also included, as I couldn't find any information regarding the maximum gape of this fish, making it tough for me to make an estimate (though it seemed from models like it was at something between at something between 70 and 90 degrees).

Note: the reason for me choosing this mechanism lies not in the use of suction force, but in combination of a powerful bite and the extremely fast opening that would result in such auction within the water to begin with. This creature does not use a suction mechanism to hunt on land.

Since it has already existed in history, the structure has a basis for existence. To work on land though, it's suction would have to move a lot more air, as the flying creatures would be able to counter any light suction (they already deal with small pressure variances while flying). Because Air has less drag, the animal would have to move a lot more air if that makes sense. The beast would have to have a supplemental air pocket, sort of like a bull frog's throat, or how many animals have the ability to use stored air to seem larger (often for warding off predators or to attract females) to move vast amounts of air to create the suction.

The maximum gape angle seems to be Allosaurus at 80 deg. but this would require a much larger suction system as it has a much larger area it needs to apply suction to. I would suggest having a gape angle at 43.5 deg, similar to the erlikosaurus andrewsi. Still extremely large, but small enough to accurately direct the suction ability.

Not the answer you're looking for? Browse other questions tagged creature-design xenobiology or ask your own question.

9
What are ways I could design a viable split jaw?
5
How can my creature use explosives to get the maximum bite force/speed?
10
is it possible for creature to have loose jaw like snake but also has enough bite strength to bit off big chunk like most predator or human do?
5
With dunkle-like Jaws, how long could the neck be?
8
Is knuckle walking possible in a cursorial animal?
6
Having a split lower jaw while maintaining a strong bite force
2
anatomy or musculature to achieve full rotate jaw?
6
Can a creature have a strong, but flexible neck?