You can skip to TL:DR down below

Arms are strong, stronger than jaws. People can break each others arms just by playing. Grip strength can easily reach a point of crushing 75 kilograms and holding a pressure of 189 kilograms on average and some can reach a pressure of 605 kilograms at peaked strength.

I want a creature who's design is to have at least a mouth in one hand, where's fingers have strong claws to rip and tear meat and skin.

Apparently human hands are already strong enough to rip flesh or puncture skin but our fingers are covered in soft skin so it's hard ripping someone's skin without our own finger bones piercing our own skin. It's like punching a wall, even if the muscles are strong enough to apply the force needed to penetrate the wall, flesh is less dense than conctete, so the hand will break. This is why boxers can not pierce humans with their fists even if the force they can apply with a single punch is far greater than what human flesh can bear.

This led me to think about a creature with claws instead of nails, covered in enamel to make them as strong as teeth. And a lamprey mouth in the middle of the palm. It would work by ripping flesh off victims with claw strikes and then forcing the flesh into the lamprey mouth as it if was a meat grinder. 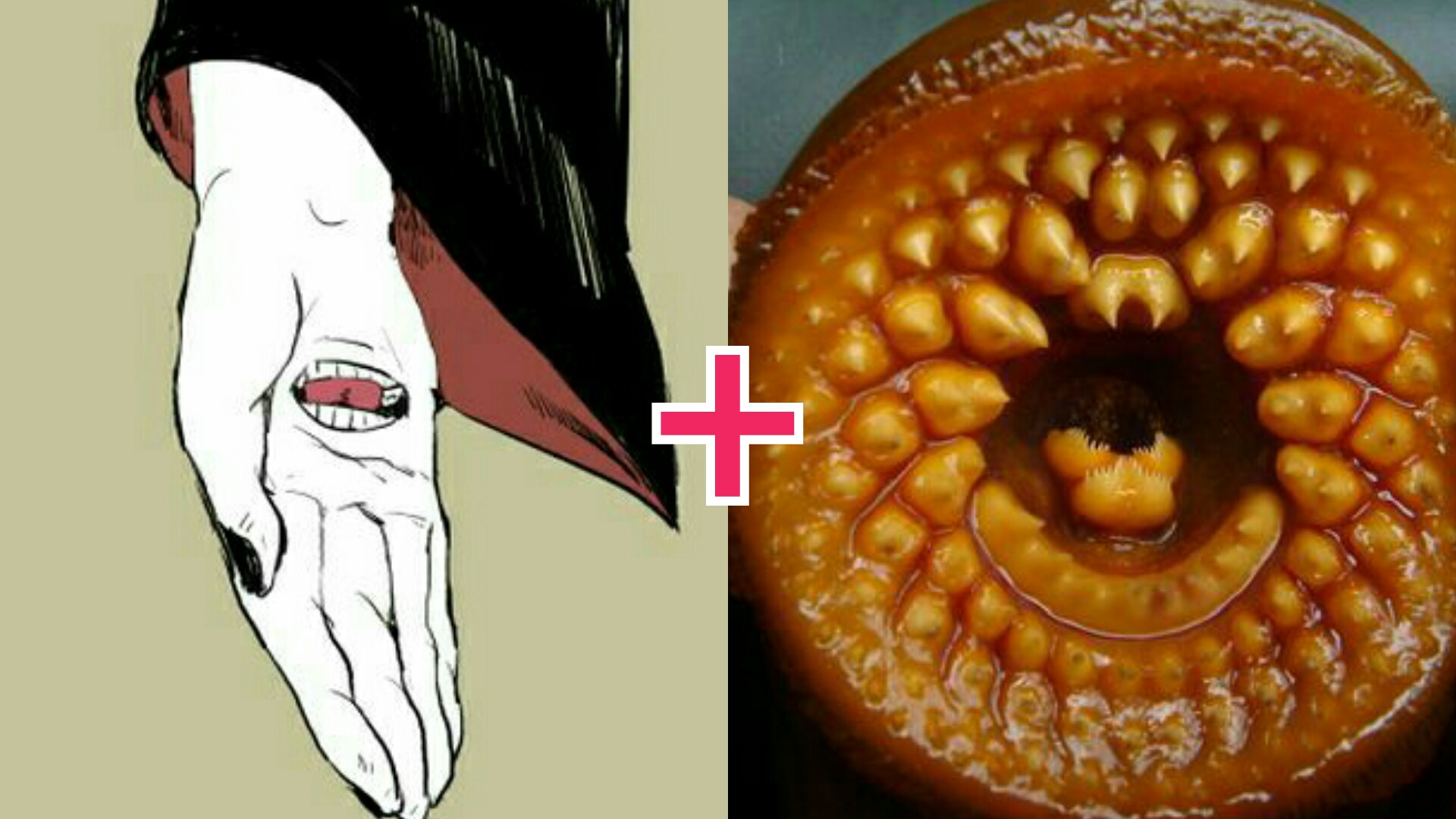 I want to know the validity of such a system considering the creature has two lamprey like mouths and a normal one. I guess there's a reason it never evolved, but maybe it could be possible with different conditions or evolutionary paths.

This is gonna be hard, simply because having 2 places to take in food doesn't seem beneficial enough to make up for the issues. Remember that simply having a mouth will be useless without the proper channel and musculature to transport it to the stomach,so the muscles in the arm would need to share space with the second esophagus and it's musculature, resulting in either larger arms or less muscle. Additionally, lamp Rey mouths aren't as good as taking in solid food as they are at draining blood, so maybe a hagfish mouth might be a better option.

But putting whether it would naturally appear aside for now, hands and arms will likely be larger and might have more bone to serve as attachment points to the extra structures, already showing how simply having this would need a fair amount of extra resources, as well as the potential to hinder other muscles responsible for the movement of the limb.

Now why it sounds mostly implausible for it to exist: it's just not worth it. Our own evolutionary path shows how a mouth tube in the head was more advantageous than one in the abdomen, for example. To not only have a functional tube in your limbs, but for it to have more than one tube to begin with is highly implausible, not worth the cost of maintaining a second mouth and esophagus. It will hinder the movement of the arms, require decent costs to maintain and proportion very little advantages to make up for it.

What you could have that's more or less close could be a sucker. Octopus have sucker pads capable of feeling, taste and smell, allowing them to better explore their environment. This trait is a lot more plausible to happen and could allow you to do things such as taste a potential food without introducing it to the mouth, aid in climbing surfaces and holding objects more securely. While this is also not that likely to evolve in the palm of a hand, it does seem to possess some advantages to the changes in anatomy it'll require.

My first instinct is to worry about the digestive tract---are there throats that run up along the arms and then join the stomach in the middle? I don't see a way for evolution to grow a throat through a limb, so I think the most plausible way for this to work is for the arms to have evolved from mandibles. Think like the mouthparts of a crab or ant, but significantly more specialized. Maybe the mandibles evolved to reach into an enclosed space that the body couldn't reach into?

What if the hand was inside the mouth-like appendage, like a hand is inside the sleeve of a jacket? The hand grabs it's prey, then the lamprey-like mouth acts like the sleeve around the hand moving over the gripping hand and slicing away at the flesh of the prey. Once cut, the mouth-like sleeve retracts up the arm and the gripping hand lifts away the cut-off flesh food. You avoid the problem of needing a digestive tract in the arm. While still seeming somewhat logical for an evolutionary path. It would certainly make shaking hands a risky business...

Try three animals instead of one

There are many examples here on Earth where two (or more) animals live in a very close organic relationship (commensalism, parasitism, symbiosis, mutualism). Your "entity" could be 3 animals in one. The main body could have no arms at all, and both "arms" could be two different animals (some sort of snakes or lampreys) that live attached to the shoulders of the main host. Both "arms" are independent (have their own mouth, organs and digestive system) but they live in a happy symbiosis with their host. And the host can control them by means of some electrochemical signals. Of course the host will never be able to play the piano with this type of "hands" (I don´t think a control that precise could be achieved), but could easily manipulate objects and feed itself.
Here are two examples of these type of relations:

A crustacean that replaces a fish toungue and lives inside the mouth:
https://en.wikipedia.org/wiki/Cymothoa_exigua

A fish that lives inside a sea cucumber:
https://ocean.si.edu/ocean-life/fish/pearlfish-sea-cucumber#:~:text=Pearlfish%20are%20slender%2C%20eel%2Dshaped,a%20breath%20and%20swim%20in.

And (just in case you find it useful) there is also an anime/manga named "Parasyte" (Kiseiju) about a teenager (Shin'ichi Izumi) that has a parasyte in his hand (actually the parasyte ate his hand and replaced it, more or less like the crab with the fish).
Despite the fact that the parasyte body can work as a real hand, the parasyte has his own eyes, mouth and teeth, but never needs to eat because takes nourishment from the blood of the teenager.

5
Creating bird-like creatures
16
Is a four armed arboreal reptile as described viable?
7
Help me Explain this Alien's Traits
5
Anatomically Correct Huddle
1
How large could a frog be?
6
Building structures underwater: What could a giant crab do?
6
If mammals with paws were to evolve to have human hands or fingers what would their paws/pads look like if they still retain it?
6
Can the dunkleosteus jaw model work on a land predator?
7
Can a creature have a strong, but flexible neck?