If people were the size of squirrels, would we ever have developed nuclear fission?

If people were about 1 foot tall and weighed about 1 pound, would we ever have made a reactor or an atomic bomb? Because critical mass doesn't change, the scale of the project to mine and process radioisotopes would effectively be >100x larger than in our world.

At the size of a squirrel, the human brain would be the size of a nut (well, some people ...). To develop our society we need a brain capable of holding billions of neurons.

Trying to compress all 86 billion neurons into a smaller space will require immeasurably longer sleep time, having no more space in the life span of mini-humans except for eating and sleeping.

We would not have the fire, the wheel, the writing, let alone a society able to create atomic technology.

You didn't say anything science-based! (=

Admitting some handwaving where the mini humans will have these conditions, they will form a society, something like the little ones at Gulliver Travels, the problem is only in the scale of the projects that they will be able to carry out.

Will they be able to work with metals, make forges, in order to build metal structures many times bigger than themselves, just like we build giant mining machines?

Per instance, this is a diesel ship engine: 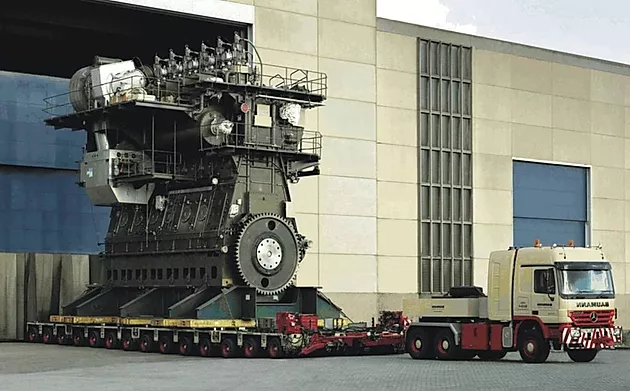 It is also good to keep in mind that they will not have all the operations in our measure, the total necessary for the critical mass will be obtained within the capacity and technologies that they will employ. The energy demands they have will also be reduced.

With 1% of the mass and 1/5 of the height of average humans a Joule is equivalent to 500 "mini-Joules". 1 MWH for them is equivalent to 500 MWH for us. Other simpler sources will seem more plausible to them most of the time, unless they are at a technological level far ahead of what we are today.

Ignoring all the other issues caused by shrinking humans to the size of a foot, such as the fact that we'd be unable to function biologically and most likely wouldn't be intelligent to begind with...

It may be large relative to the 1 foot sized human, but it's still the same size compared to the deposits present on Earth, so the material is there, it just needs to be mined. A bit of extra work wouldn't slow down, say, the Manhattan Project from being developed.

I concur with Halthawe's at first sight: why couldn't they? answer.

But Consider:
Squirrelmen, being only a foot tall and weighing in at only a pound have very different materials & technological needs. Being relatively light & weak, they could easily make vast yet structurally sound edifices from wood, leaves, and bronze.

They could make a steam train entirely out of copper, brass, and wood. They may never even come to use iron, to say nothing of any more advanced metals. The brass rails of a standard garden railway (No. 1 Gauge) can easily support a hundred pounds or more, whereas a scaled up brass rail could never support the weight of a steel & cast iron locomotive.

Answer:
No. They never needed to get to enough of the intermediate technological points along the way. Even if the Squirrelmen discovered the physics & math that would allow them build The Bomb, they may simply not have the material to make it a reality.

Not the answer you're looking for? Browse other questions tagged technological-development nuclear-weapons nuclear-power or ask your own question.

27
What species will benefit most from humanity's having been here?

7
What kind of technology would be developed in the process of creating shapeshifters?
37
How would the indigenous peoples of North America have developed in the absense of the Europeans?
27
Railgun-launched nuclear warhead
5
Multi staged relativistic projectile usable in hard sci-fi space combat
8
I'm looking for an event that would have accelerated the American nuclear program
8
Minimum tech for agricultural desalination
9
What situation would prompt the world to dump the use of Atomic and Nuclear Explosives entirely?
2
How would the sudden disappearance of nuclear weapons and power plants affect Earth geopolitics?
10
What would happen if 250 nuclear weapons were detonated within Owens Valley in California?