Reason for one sex to develop a hammerhead

I'm looking for a reason to explain why a species of fictional creatures resembling vaguely a shark has evolved this form of sexual dimorphism where one sex has an hammerhead and the other doesn't. 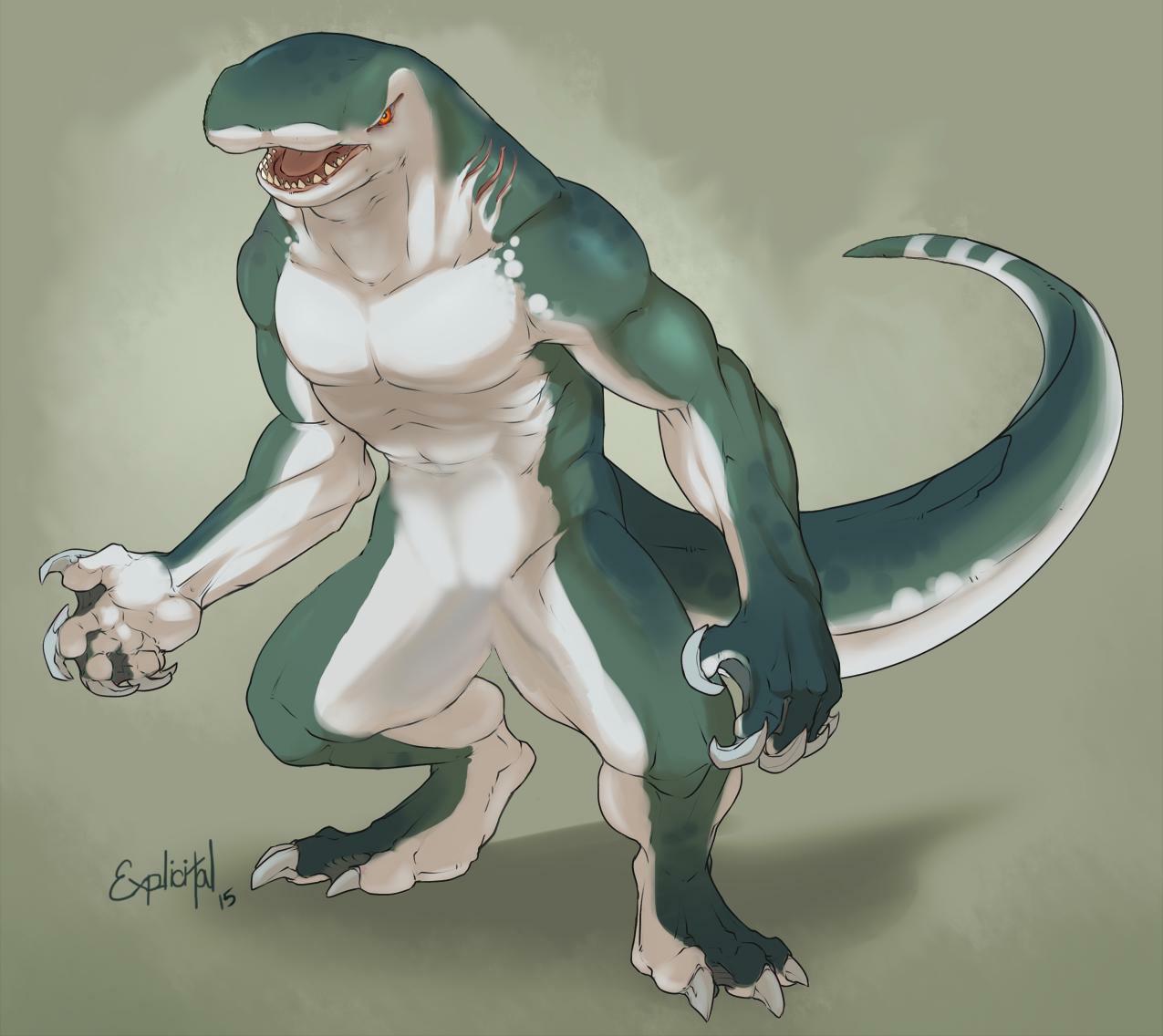 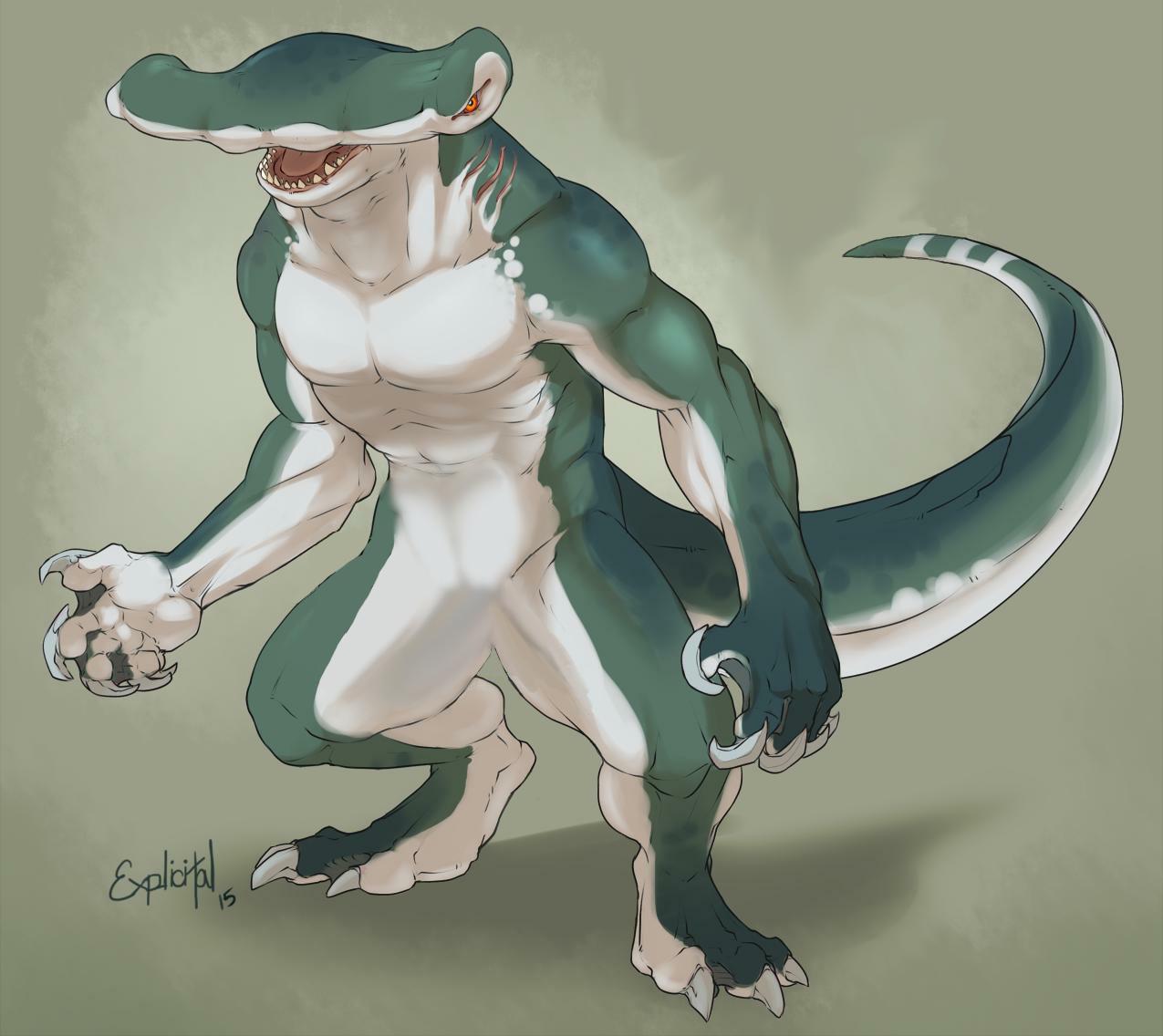 Image source: pictures originally created by Explicital, the original one was the hammerhead with a different tail and a large penis. They were poorly edited on a phone to censure the penis and because I didn't like the tail.

Sexually dimorphic headgear is extremely, extremely common in the animal kingdom, ranging from insects to fishes to iguanas to Shringasaurus to proto-mammals to ungulates. Many species of ungulates, in particular, have very elaborate head ornaments in the males but much less noticeable or absent ones in females. Antlers or horns are the commonly thought of examples but many ungulates will have bony growths of some kind. Brontotheres, protoceratids, and giraffes have skin-covered bony growths known as ossicones, entelodonts have bony flanges on their skull, and warthogs and some oreodonts have well-developed bony "warts". In all of these cases the growths of males are much larger and more extreme looking than in the females. Indeed, in some cases (the protoceratid Protoceras or the modern okapi, for example) males have ossicones and females don't. Hercules or rhinoceros beetles are another good example. The males have extremely elaborate head shapes they use for intraspecific combat, whereas the females lack headgear.

In a lot of these cases this headgear evolves for the purposes of male-male combat. Headbutting, locking antlers, etc. In your case I would expect head-butting to be the primary driving factor, especially as real hammerheads use their heads to pin down stingrays on the sea floor so they can eat them. Whacking each other and trying to pin a rival male with your head isn't too different from what real animals do (headbutting between males is pretty common in a variety of species), and it would result in positive sexual selection on the hammerhead (males with biggest heads are more likely to reproduce).

The other thing this kind of sexual dimorphism does is it advertises mate quality, since a large hammerhead takes a lot of nutrients to grow and thus cannot be easily faked. This has two purposes: it frightens off smaller rivals who don't want to pick a fight with a male with a huge hammer (and thus kind of ties into the whole intraspecific combat thing), and it shows to females that the male is healthy enough to afford to grow a gigantic hammerhead. This is what you see with things like deer antlers.

The condition you show here actually occurs to some degree in the stalk-eyed flies. Both genders have hammerheads, but the males have much longer and wider stalks. The length of the eyestalk is thought to advertise mate quality because they are such a handicap to survival, like peacock tail feathers.

If you are looking for a mate, you can waste a lot of time and resources if it turns out what you thought was a mate was actually your same gender. It might be fun for all involved, but thinking now of producing offspring - easier to do with a different gender mate.

In the images I see that your two genders are, except for the head, extremely similar looking. I can imagine embarrassing mixups might happen all the time.

I could imagine that under circumstances where one gender is looking for another, a distinguishing characteristic might help. If these creatures are living in dark water and popping their heads up to look around for mates, head shape according to gender is the obvious choice. Flattening and stretching one head type and squishing out the other head type is a good way to make heads different from a distance and in low light, and individuals with gender more obvious from a distance turned out to have better genetic fitness.

I could imagine there might be males with a female head phenotype, which tricked the other males into competing over it much like certain male garter snakes do. This female appearing male then an edge over the other exhausted males. The females are apparently OK with a male that looks like a female; so too your people.

Well first, hammerhead sharks use their head shapes to find prey. The wide set eyes give them a wider scope of vision. They also use their heads to pin down prey like rays on the bottom of the ocean, and then eats them when they are pinned.

Sexual dimorphism naturally occurs through natural selection that helps the species to survive. So to make it work, your shark creatures will need a reason why the females have hammerhead-like heads, and why the males are better off without them.

Often times odd head shapes evolve due to a specific way of feeding, so perhaps your females eat a different prey than your males. Another idea to consider is sexual cannibalism in which a female animal eats its mate or feeds its body to young. Snakes do it because mating requires a lot of energy and nutrition that they can gain back from eating their mate, and spiders like the black widow do it because their dead husband makes for a handy meal to kick-start their babies' growth. Another idea to consider is that the females may use their heads in display during the mating process, though for that you would need a justifiable reason for why the female with the most hammerhead-like head is the best survivor, so the head needs to serve a functional purpose.

If you want a better answer than I can give, I would suggest looking into why hammerhead sharks adapted to look the way they are, and the purpose of sexual dimorphism in other animals.

2
Hammerhead dragon craving for seafood
17
How did the Armatae Bestia evolve studded plates?
8
What would be the most important consequence of decreasing sexual dimorphism in humans?
7
Alternative options to change sex-based characteristics in a non-modern world setting?
5
Mass effect: alternative reason for asari illusionism
30
Plausible reason for gold-digging ant
6
How to develop biological laser beam eyes?
3
A good discerning visual feature for female lizardfolk
0
How could humans evolve to reproduce in groups of seven?