Why would gravity/falling only affect certain ‘blocks’?

This is part of my minecraft universe scenario. In Minecraft, a popular voxel based game, gravity or the action of falling affects only certain blocks, namely sand, snow, anvils. Gravity/falling also affects all living creatures and item entities. Other blocks besides the ones named do not fall even if it’s just floating in the air. Why and how would this be? 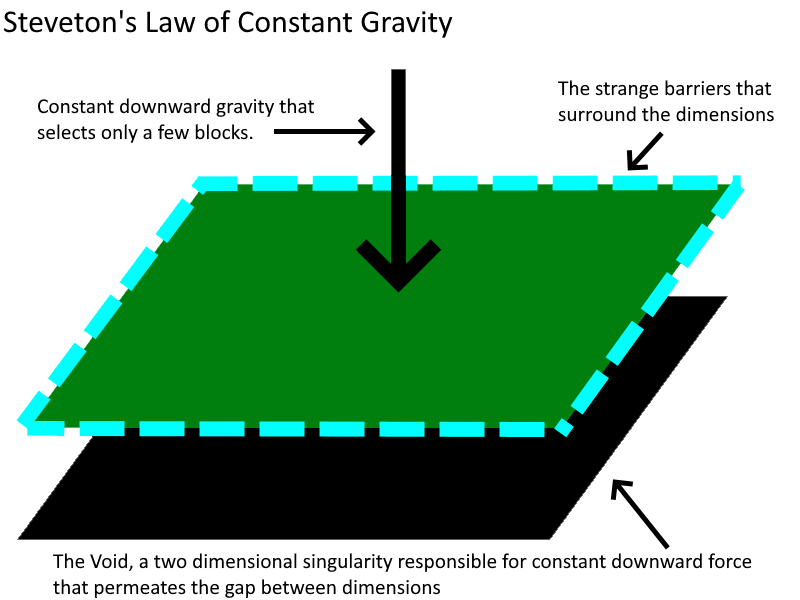 This image is one I made a couple months ago, it’s probably not too accurate but I hope it helps. Gravity is a constant universal downward force in Minecraft. A lot of it is just jargon, but it outlines the basic concept.

OK this might sound a little far-fetched, but since we're talking about floating objects...

All the objects in the world are four dimensional, and are bound to the ground in an area outside of our 3-D universe.

To see why this works, you need to wrap your 3-D suited mind around the concept of 4-D space. (OK I know people say time is the 4th dimension but I'll ignore that for this answer).

Imagine if you will, "Flatland", a two-dimensional universe, containing only 2-dimensional people objects and people, everything in the universe lies on a single plane of existence, with just an X and Y axis. The flatlanders only have a concept of depth and breadth (or height if you wish), and they would find it impossible to imagine the concept of 3 dimensions.

Now imagine a sphere passes through their plane. This sphere appears to them as a circle, increasing, then decreasing in size as it passes, because they can only see the single slice of the sphere that currently intersects with their plane.

Now imagine a normal 3-D bridge, which crosses through their plane. They can't see the parts of the bridge connected to the ground, they can only see the ground, and... a floating platform!

Now we return to our world, we all can see in 3-D and only understand the concept of 3-D objects, but there is actually a 4th dimension and the objects are four dimensional, but they look 3-D to us because, like the Flatlanders, we can only see the "3-D" slice of them.

Likewise (if we're to use Minecraft as an example) when you chop a tree, it doesn't fall down, because it's a 4-D tree. If you can imagine flatland vertically intersecting a real-life 3-D tree, they could "chop" the trunk and it would look to them like there is a gap with a tree floating above it, but actually all they've done is cut a vertical slit in the trunk so the tree is still perfectly capable of standing.

This has the advantage of explaining why floating objects don't bob or move about as you'd expect if they were actually floating in the air.

Finally, why do some objects fall? Well the easy answer is you could say not all objects are 4 dimensional, but you can also take a look at the substances that do fall: snow, sand - fluid substances that would flow down even if you cut a slit in it. You can't build a bridge out of sand!

This requires throwing out relativity

As the other answer notes, relativistic gravity affects all objects regardless of whether they have (gravitational) mass or not. Relativity itself is built on two main assumptions:

All of the weirdness happens because Maxwell's equations define the speed of light, which means it must be the same regardless of how fast you are moving (as per the second point). Removing the first assumption will produce a large number of problems, so let's look at the second one. Removing it means that there is likely to be one true reference frame that all physics is based on, and that you will get incorrect results if you try to calculate something based on a reference frame moving relative to it.

Conveniently, we're talking about simulating a video game, which already has only one reference frame in which the physics operates. We can then drop relativity without breaking very much (no current technology relies on it in a major way, it would mess up some orbits but with an infinite plane of force, that's the least of your concerns).

You can then apply Newtonian gravity without problems. Interestingly, these equations inherently leave open a possibility for what you want. In our world, inertial mass (the ability to resist acceleration, the m in F=ma) is always equal to gravitational mass (how much it produces/is affected by gravity, the m in F=GMm/r^2), but there isn't actually anything in classical mechanics that requires this. Your floating blocks then have zero gravitational mass but nonzero inertial mass.

(side note: there will likely need to be some process that can add or remove gravitational mass from an object. Considering this is an entirely new distinction, you will need to handwave this)

What you try to create is nigh impossible this time. There is a question on quora regarding particles not interacting with gravity (the question is in context with black holes but the answers are generalized and partly fit your question). I will collect and summarize the most important quotes:

Let me tell you, the criteria for a particle to be affected by gravity is it's mass. So, whatever has mass is affected. But there are massless particles like photons. But still these do get affected because they are in motion and they do have momentum. So because they have momentum, they should have mass and that mass is equal to e/c^2. (Swaroop Joshi, B.e from B. M. Sreenivasaiah College of Engineering)

Gravity couples with space time itself, at least as described by general relativity. There are no particles that are unaffected by the curvature of space time. (Ron Spencer)

In one line: it's a physical impossibility, reason being gravity couples with anything having energy. (Devashish Singh, PhD, Mathematical Physics)

And, most detailed and important:

(…) while there are no known particles that are not affected by gravity, it is in principle possible to construct a theory containing particles that are not affected by gravity. In this theory, such particles (or fields) "would have zero variation with respect to the metric", and thus they would not figure in the Einstein field equation that characterizes the interaction of gravity (the metric) and other fields.
Of course, such a theory would be horrendously ugly: it would violate the weak equivalence principle, it would not be Lorentz invariant, it would not be diffeomorphism invariant. In short, it would be a mess. Although such messy theories are not completely unheard of (…)
Such a theory, by the way, would violate even basic conservation laws like energy-momentum conservation, so it could be used for all sorts of exotic things, e.g., as a source of limitless energy, inertialess acceleration, or perhaps even sending signals back in time. So quite likely, the theory would be grossly unstable. As I said... messy. (Victor T. Toth)

So to summarize the sings said and to answer your question: You will have to be a theoretical physicist to create a setting of physical laws which would allow what you want to achieve (I'm not so I can't) and even then you would get a lot of unwanted side effects you won't get under control.

Not the answer you're looking for? Browse other questions tagged physics gravity .

14
How fast would one have to move to climb up falling debris?
2
Is it possible to create a consistent timer using only gravity?
4
How would much stronger gravity affect tiny living things?
5
How would lower gravity affect motion?
1
How would fast rotation affect gravity?
1
Falling in a micro-gravity scenario?
3
Ultimate fate of someone falling out of a skyscraper in warped gravity
3
Using spin gravity only for stationary activities?