Hunting style of a feline species with doubled sets of fangs

Some time ago I stumbled over a picture in the internet showing a cat with two fangs on each side, directly behind each other. In this case they just didn't loose her baby teeth but it aroused in me the idea to create a feline species for my fantasy-world which has two fangs in each quarter of its jaws (so eight instead of four in the whole mouth). The set of teeth for my feline species finaly came out like that (described from middle-front to the back, so one half of each jaw is described, the other halfs are mirrored identical):
Upper jaw: 2* incisors, 1st fang, 1st premolar, 2nd fang, 2* premolar, 1 molar
Lower jaw: 2* incisors, 1st fang, 1st premolar, 2nd fang, 1* premolar, 1*molar
The last two molars/premolars of the upper jaw and the molar of the lower jaw are adapted as carnassials.
(For comparison, a normal cats jaw is like that:
Upper jaw: 3* incisors, fang, 3* premolar, 1 molar
Lower jaw: 3* incisors, fang, 2* premolar, 1*molar
The carnassials are identical.)
The first fang takes the position where in normal cats the third incisor is placed, the second is a little backwards from the usual fang position (there is enough space for the premolar between), so the fangs of one jaw take a trapezoidal form.

So finaly I got stuck with the question: In which hunting styles this set of teeth would give an advantage against other feline preditors?

(I didn't yet define the rest of the body, social behaviour of this species and so on, as I want to adapt them to the outcome of this question. The species shall be feline and at least be as big as a lynx but not bigger then a small tiger.)

The primary use of a fang is biting/piercing and tearing flesh. The main advantage of having more fangs is obviously getting a better grip after biting the prey. So I see a not so big cat (as big as an ocelot or something like that) hunting in pairs or small packs. They stalk their prey and attack with a jump and bite to the throat. Possibly even from above (if it is a forrested area or a jungle). The prey could be something bigger and faster, so hanging on its throat and slowing it down could be essential for success. This advantage has to be rather small or there have to be disadvantages I can't see, else I'm shure that this would have come by evolution already.

Cats already have this

The upper third incisor (I3) of cats is already enlarged and canine-like relative to the other teeth and performs the role of a secondary canine. This is even more pronounced in hyaenids. 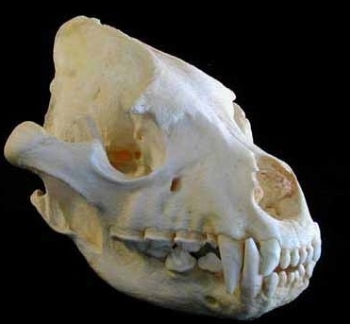 Due to its position, the way this tooth functions is it helps to hold the prey in place while either trying to grasp it in the mouth (as in while pouncing on it or trying to catch it) or holding it so the carnassials can more easily shear off a piece of meat.

In a related example, some Permian proto-mammals (gorgonopsids and therocephalians) will have two canines in their maxilla (sometimes it's hard to tell if there are actually two canines or there is just a replacement tooth). The reason for this is thought to be so there is always one functional caniniform tooth in the jaw since the teeth are constantly being replaced. But true mammals don't constantly replace their teeth (except for the molars of manatees and one wallaby). 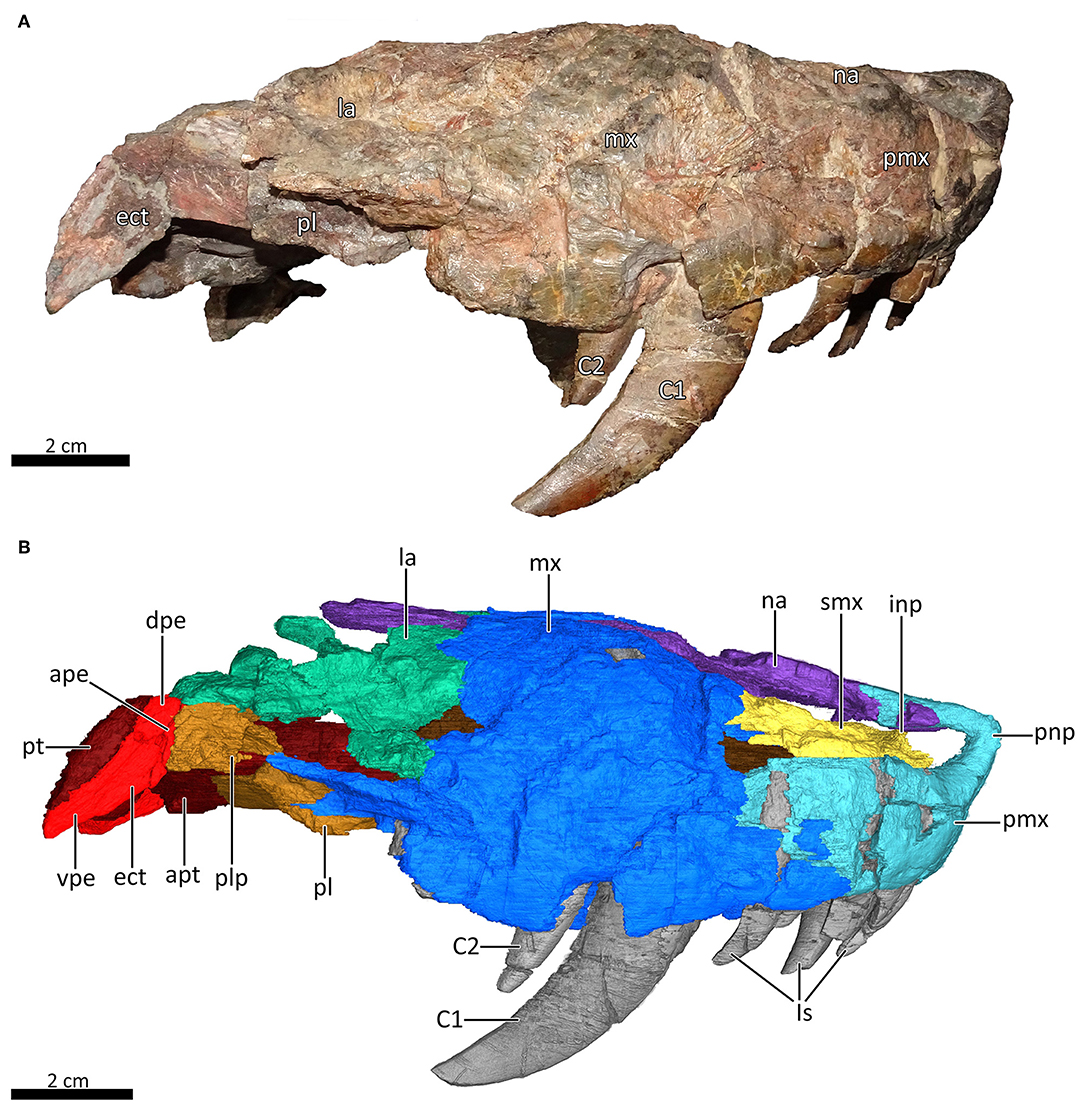 Fish are slippery. Sea lions have lateralmost incisors long and sharp, and comparable to their adjacent canines. I imagine to improve grip on fish.

Below: a bobcat skull and a sea lion skull. Both taken from Amazon. 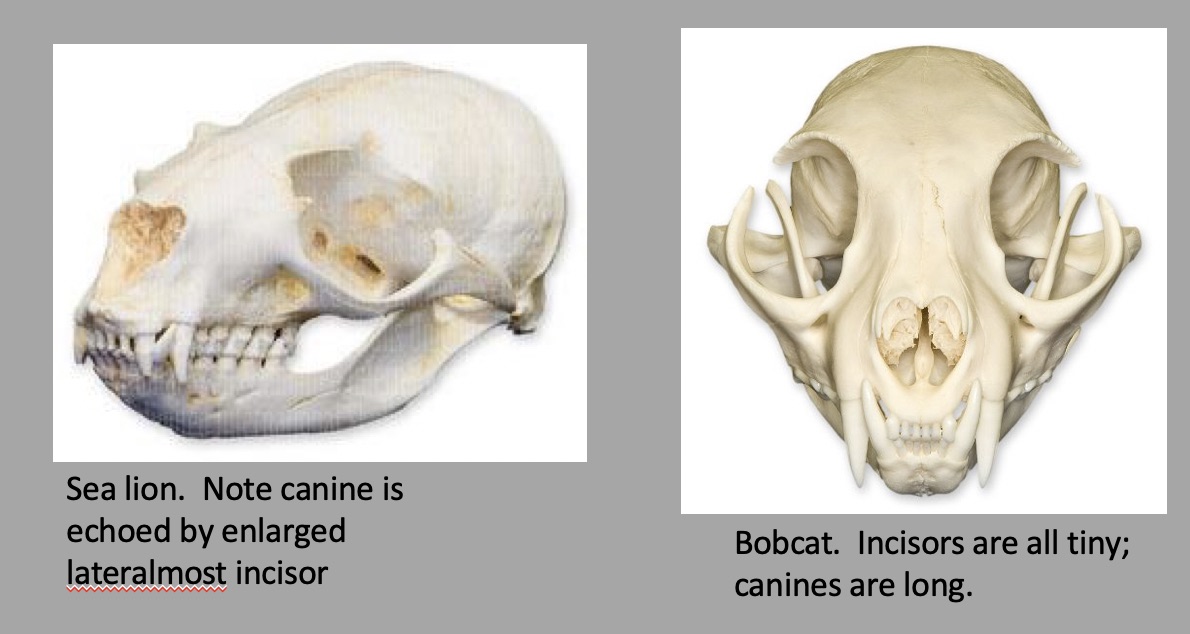 Little, nearly vestigial teeth except for long canines mark the felids for the super carnivores they are. Keeping that setup but with double canines would improve purchase on slippery fish, and be similar to the sea lion plan. It might be evolutionarily easier to exaggerate the incisor rather than double the canine; that smells like a developmental anomaly rather than a genetic change.

I thought maybe I would see a similar long incisor setup in fish eating river otters but no - they have a typical carnivore tooth setup, less exaggerated than the cat. Otters are not as water adapted as sea lions I guess.

Not the answer you're looking for? Browse other questions tagged reality-check biology fauna or ask your own question.

10
Is a mountainous crater filled with fog realistic? Ways for a species to penetrate the fog?
4
What adaptations would a water-dwelling species need to survive by primarily hunting pre-industrial humans?
14
Is a four armed arboreal reptile as described viable?
22
Evolution of tree-dwelling species that will help predators find prey if prey species doesn't give it a bribe?
39
What would justify hunting dragons that are made with real physics, with melee weapons?
23
What is the bio-mechanical plausibility of a fox with venomous fangs?
4
Could this organism be viable?
2
The Validity of Hunting with Fire