Properties of a distributed spell altering the appearance of creatures

In my story, a man lived under the influence of an evil sorcerer. In this world, magic takes energy to cast, and the energy required increases over distance, the sorcerer casted a spell focused around the capital, to suppress all magical beings, including making them assume a more humanoid appearance at birth, if they were born in the sphere of influence. The farther out the “humans” go, the more the influence lifts, and eventually, can be broken and warded against. The protagonist, still, manages to use a weak variant of magic discovered in the capital’s prison to break out and escape to the fringe rebellion. While there,a Druidic being noticed his strong magic and lifted his enchantment, revealing him as a humanoid-yet-Gilled and with webbed fingers creature. What mythological creature most closely matches that I mentioned above?

As regards mythical humanoid water people, there are plenty. I am pretty sure your protagonist looks like this guy, from a 15th century French bestiary. 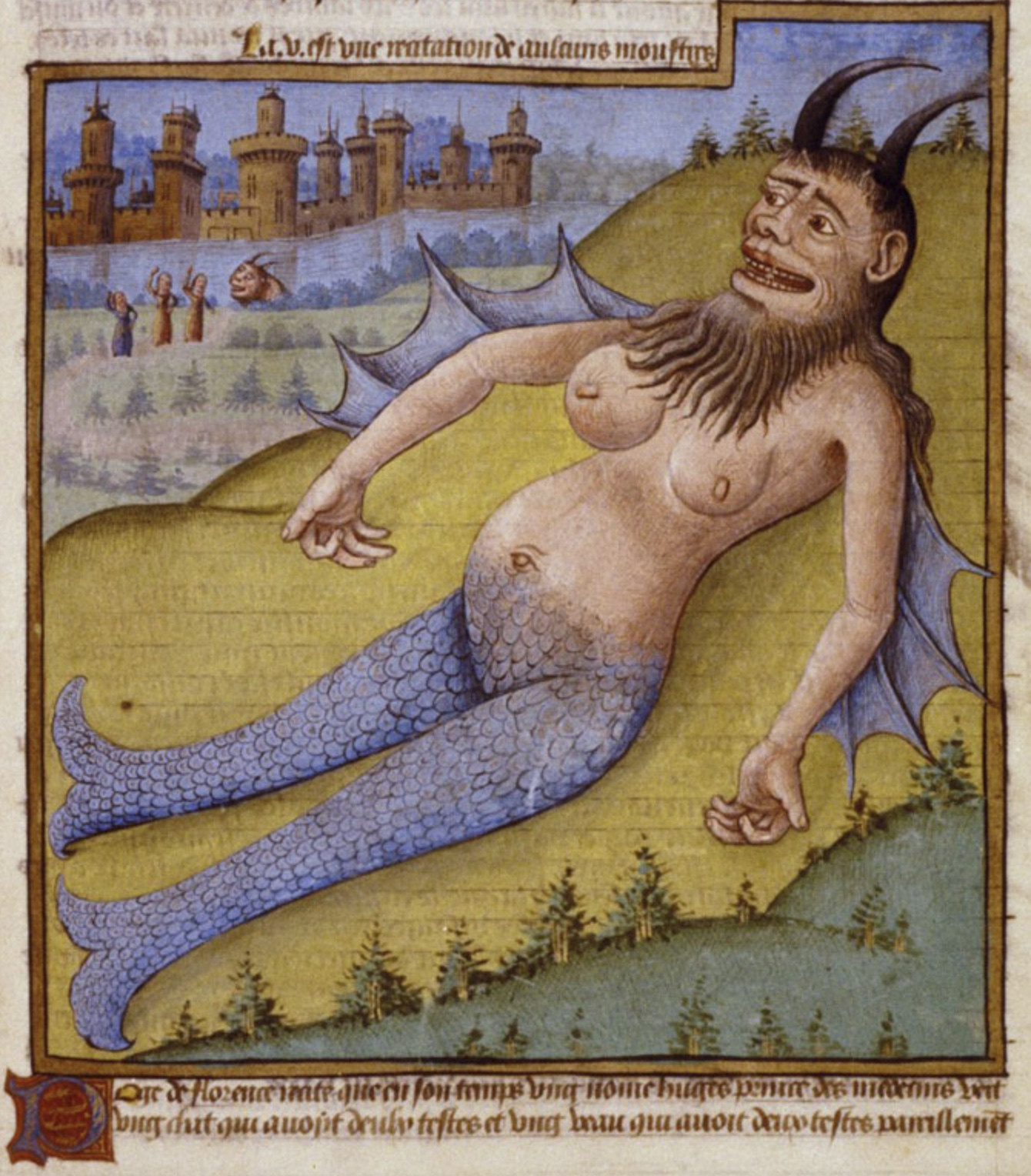 I think when his true form is revealed all parties will be surprised; hopefully a pleasant surprise. Look in the background - the ladies and his buddy want him to quit laying out and go for a swim.

As regards magic, it seems fine the way you have it. The sorcerer is working over a lot of creatures over a great area. The druidic creature is not that strong, but he is up close and personal, and focused just on your awesome merperson. He has leverage, so to speak. And of course it is magic (no doubt of one of the types recently laid out by AlexP) and so you can have the reversion to true form be permanent, or have what the druid did gradually wear off as long as your protagonist stays in the sorcerer's influence.

A Shalarin or a Kappa

A character that is humanoid, has traits that indicate it as aquatic and uses magic all are present on the Shalarin, with the only defect from this creature being that it belongs to a scenario in a dnd campaign.

However, a Japanese kappa more or less checks all of the requirements: possess magic (magic fluid in its head, which is the source of its power), is an aquatic humanoid with webbed fingers and is a creature from Japanese mythology.

As to how the spell can be broken, that's mostly up to you depending on your magic system, but you could make it so that, instead of completely breaking the spell, you could be instead temporarily nullifying it's effects on the protagonist, something that theoretically requires less power than breaking the spell altogether and can add a constraint to for how long your protagonist can use his Shalarin/Kappa powers.

The question is just about the kind of creature? I would suggest changing the tittle, it makes it seems that you are going to ask something about the spell.

Not the answer you're looking for? Browse other questions tagged magic creature-design balancing-magic-systems .

14
Evolution of the Giant-Eye creatures
13
What is the caloric requirement of a fire spell?
2
What are the motives of spell teaching spirits?
5
How does my spell ignite the sky?
22
Weaponising the Grasp-at-a-Distance spell
4
The Properties of Flaming Fire Magic
15
Why casting grand spell usually accompanied with tapping the ground with quarterstaff?