Mercury is tidally locked in a 3:2 spin-orbit resonance with the sun. Other resonances like 1:1, 2:1, 5:2 can occur as well. Many objects, like the moons of Jupiter, are locked in mean-motion resonance, meaning that each object orbits an integer amount of orbits for each integer amount of orbits its neighbors complete. This means that the system is very stable and will return its initial state eventually.

I was wondering if a member of a resonance chain could be locked into a higher order, non 1:1 spin-orbit resonance with it parent, while still being in mean-moton resonance with the other planets?

Specifically, I was wondering if this roughly drafted system is realistic?

Valhalla b to e are really tightly grouped close to the star in mean-motion resonance. All of them are locked in a 1:1 spin-orbit resonance, except for Valhalla e, which is in a Mercury like 3:2 spin-orbit resonance. I was wondering if Valhalla f, could explain this state of the inner system. It has herded the planets together so close to the star and interacts with Valhalla e so that it is more eccentric than the other planets. Is that a believable and stable setup?

The structure of the system is supposed to be similar to the innermost system of Kepler 90. 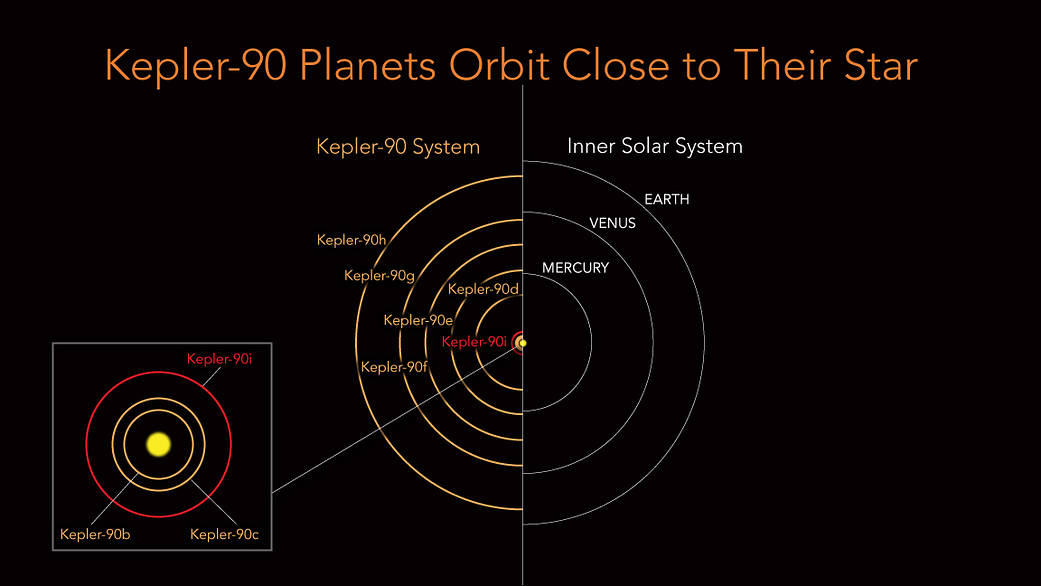 The answer to your first question - Can a planet be in spin-orbit resonance with its parent and in resonance with other planets at the same time? - is yes.

However, I don't think that the system you describe is possible. F-stars are 1-1.4 solar masses, and from the mass–luminosity relation, we hence get that their luminosity is at most 3.8 times that of our Sun. This would make the habitable zone reach out about twice as far as in our solar system (since light and heat diminishes with the square of the distance). Most estimates of the outer edge of our habitable zone are within 2 astronomical units (AU), which would make it 4 AU for your system. I doubt that a superjupiter of 9 Jovian masses in such an orbit would allow stable planets except very close to the sun. Jupiter's presence, at 5.2 AU from our sun, has prevented a planet forming where the Asteroid Belt is. Mars orbits at 1.5 AU and could probably not be much further out (perhaps a maximum of 2 AU). At a rough estimate, I doubt any inner planet in your system could be stable farther out than around ½ AU, which would make it blistering hot, given the higher lumonosity of the sun. A planet at this distance would receive about three times the heat that Mercury gets. If the star's luminosity is less, then the outer edge of the habitable zone will also be less, bringing your superjupiter even closer to the sun, possibly making any stable inner orbit impossible.

One caveat to this is that planets in orbital resonance will make closer orbits more stable. However, five stable planets within your superjupiter is stretching things quite a bit.

Not the answer you're looking for? Browse other questions tagged science-based planets physics astrophysics tidally-locked .

12
In a created planetary system, how many planets can fit in the goldilocks zone with stable orbits?
5
How many Mars sized planets can form and remain stable in the habitable zone of a Sun-like star?
10
How would this tidally locked planet be affected by its moon and would the moon have a deaccelerated orbit?
8
What's the longest plausible orbital period for a habitable planet with a 3:2 spin-orbit resonance?
2
Conditions for human life in a Jupiter-like system
6
How To Make an Earth with 27 Suns Work, Attempt Two: Orbital Stability
3
Can giant planets in the habitable zone have rocky moons?
12
How close to each other can Earth-mass planets plausibly form from the protoplanetary disk?
2
Is it possible to make a stable planetary system like this, and what would the orbits have to be?
2
What are the conditions required for a tidally locked world to be in orbital resonance?