I have a scenario where I need a man-made lake to overflow. It’s located higher than sea-level. There are underground streams which could be feeding it. It could have a channel to drain it into the Thames (story is set in London). There are caverns and underground tunnels underneath.

Ideally some sort of vandalism will cause it. In the past a ship crashed into the Thames barrier and caused it to malfunction which might be useful if London was expecting a flood. Would it be possible in this scenario for the swollen river to flow UP the channel used to drain the lake into the river?

Any other ideas will be gratefully received.

jdunlop is on the right track, but a freak cold snap isn't necessary, and you said you wanted sabotage (vandalism) to play a part.

Well, that's easy. The catch is that you'll need two man-made lakes. The one above (i.e. upstream of) the lake you want to flood soaks up a bunch of rain, and, due to whatever factors (mismanagement, vandalism, some freak occurrence), its dam fails, suddenly releasing all of its water into the lower (downstream) lake that you want to flood.

This isn't merely plausible, it recently happened in Michigan. (Wikipedia link; short on details, but more likely to stick around in case the previous link disappears. Search the web for more; that was more or less the first link I found.)

There are two ways to make a lake overflow. The first is to add more water. The second is to add less lake. How can we achieve that, though?

By adding something to the lake which fills up space, and displaces water. A landslide, to fill it with earth, a nearby tower block falling the wrong way when it is demolished, or large balloons (weighed down so as not to float) which can be inflated would all have the right effect - and, in the first 2 cases, could potentially block any underwater drainage too.

Obviously, the suitability of this method will depend on how close to "overflow" the lake is normally kept (which will determine how much material needs to be added), and how much conveniently located material there is to add. A lake at the foot of a mountain, with a collection of abandoned tower blocks lakeside, will be a lot easier to manage than a lake on top of a mountain, with no nearby structures.

With no indication of what "higher than sea level" means:

If your man-made lake has existing inflows and outflows, all you need is a confluence of natural events.

First, a cold snap in early spring. Cold enough to freeze the surface of the lake. Then, a sudden thaw cracks the ice, setting it in motion towards the outflows and causing an ice dam to form.

This thaw is the result of a lot of warm, wet air coming from the south, which precipitates into the watershed leading into the lake. With no egress and tons of additional input, the lake could overflow in hours.

Madam Prime Minister, Her Majesty's Corps of Engineers has researched all aspects of modern dam construction and consulted with their peers in the field throughout the Commonwealth and throughout the world. They assure us that the dam will withstand all Acts of God including, as Sir @JDunlop clarifies, hundred-year rainstorms and, by extension, hundred-year snow storms. As you may remember, the Thames last froze over in 1963 and snowfall exceeding 30cm (12 inches) is quite rare. We must look back nearly a century to exceed this amount and the marvelous depths of 12 m (40 ft) snow drifts in the 1800s are, we're certain, exaggerated. We are confident that a thousand-year storm would be required to breach the dam or exceed the capacity of planned run-off.

We respect that overflow from rivers draining areas not naturally draining into the Thames basin are possible, but given the geography of England, that appears quite unlikely — but the Corps continues to monitor water flow throughout the nation. It is this monitoring, along with modern (nearly instantaneous) communication that would make a natural breach not conversant with a thousand-year storm highly unlikely.

Likewise, the Caversham Lakes could experience a catastrophic release of water, but the Corps has analyzed the seven locks that exist between the Caversham Lakes and Dorney Lake and feel they can moderate the flow well enough to not substantially threaten London. However, they admit that if the older Caversham Lakes dikes1 could be overwhelmed by substantial rain, perhaps even less than a thousand-year storm.

The Corps is less confident in the face of global terrorism or even homeland malfeasance. There are canals throughout Britain's farmland and those canals, as robust as they are, are often merely earthen dikes that allow the passage of everything from irrigation water to small shipping. Such dikes are obviously susceptible to sabotage, even in the lowest forms such as by individuals or groups seeking access to unmetered water sources. Although highly unlikely, it is theoretically possible that such a tap in one of the larger canals could, eventually, result in erosion that would compromise the structure of the dike — releasing the contents of the canal and potentially threatening the Dorney Lake Expansion. The Corps assures us that it biannual review of the canals is sufficient to defend against such threats.

Finally, Madam Prime Minister, the Corps would like to bring to your attention their continued distrust over the Portishead Advanced Water Desalination and Reclamation Center, which is nearing completion. As you may recall, this center is designed to employ sub-fission molecular separation techniques designed to provide sufficient potable, non-potable, and irrigation water for the entirety of the South West Region of England. The Corps renews its objections to completing and commissioning this center without the recommended tests and inspections outlined in Chapter 37, Part II, Volume 6, of document XN-3447-H, Concerning the Experimental Nature of the Portishead Advanced Water Desalination and Reclamation Center and the Plausible Outcome of a Critical Mass Chain Reaction Resulting in Catastrophic Water Production.

Madam Prime Minister, in a nutshell, should the plant's controls systems be compromised, the result would be water production in the Upper Thames Watershed that could result in substantial flooding of London with no recourse but to demolition of the facility, threatening radioactive exposure to the peoples of Avonmouth and Bristol. Though highly improbable, such a catastrophe would redefine the Thames waterway and cause untold billions of pounds in damage and considerable loss of life.

Thank you, Madam Prime Minister, for receiving this report. As always, your humble servant....

1 If there are any such dikes. I don't actually know. Fiction's a great thing, right?

Apparently, London has a history of flooding. You mentioned the Thames Barrier. It is apparently pretty important when a lot fresh water is flowing into the Thames. 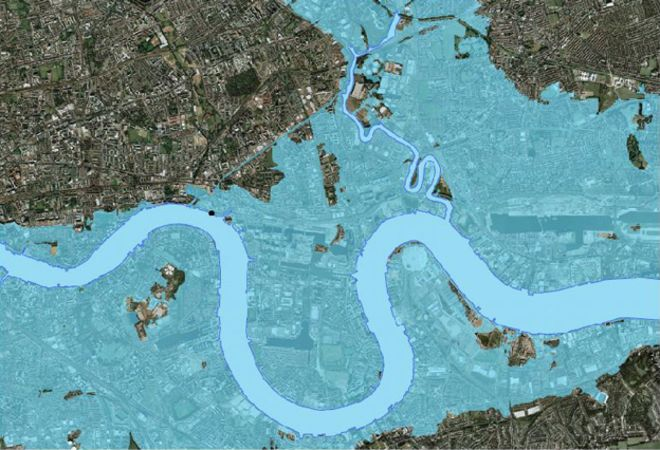 This BBC article talks about the Thames Barrier and how it is used to prevent flooding.

With no barrier, at high tide, the sea would normally flow up the estuary and into London, pushing the river water back. With all the extra rainfall, this could worsen the flooding. The barrier prevents this from happening. The gates are left shut and the river water is held until the tide turns. Staff wait for the water on both sides to "equalise" - reach the same level - and then the gate is opened and the river water can rush out into the estuary.

Perhaps this could be a factor. The article mentions storm surge from the North Sea.

Dams collapsing can be quite destructive, so if your lake is man made, perhaps the damage leads to a collapse.

Simplest method if it's spring fed is an earthquake causing the springs to send more water? Perhaps they now access a bigger underground reservoir that was previously not connected and now there is a huge pressure increase. Earthquake could also damage the retaining wall or block the drainage outflow.

If it is better as sabotage, then blocking the outflow would do it, but has more chance of being noticed and remedied unless it was a really big blockage.

This has happened to a glacier-fed natural lake in a mountainous region through ice calving. In 1941, a large chunk of ice from a glacier on Mt. Palcajaru in the Huaraz region of Peru broke off into nearby Lake Palcacocha. This is the sort of freak event that can happen every few hundred years purely by variations of the glacier itself, or possibly triggered by earthquakes, landslides, etc. The ensuing mudslide killed several thousand people and wiped out multiple villages in the valley. Today the glacier is shrinking due to climate change and the resulting meltwater is causing the lake level to rise back to its previous levels. There's a real fear that the same disaster may happen again, only today there are many more people living in the region. If the event in your story is triggered by vandalism or some other kind of generalized malice, look no further than the oil companies that continue to reap massive profits while publicly denying there's a problem and attempting to silence their critics.

More generally, you can look at glacial lake outburst floods. These have been quite disastrous in the past, but today there's good monitoring and preemptive measures.

Not the answer you're looking for? Browse other questions tagged geography water-bodies caves geophysics or ask your own question.