Size of a flying city based on dirigibles

In my world I need to create a city that permanently floats in the air. My idea was to create a sort of trading center where the dirigible-like airships in my world can dock and trade. Over the course of a few decades, people slowly started expanding the city ship by ship, building more permanent houses and even hotels from decommissioned ships that could stay in the air but not really fly. And piece by piece an entire flying city was built.

The city I have in mind has around a thousand permanent residents, but almost the same number of traders come and go everyday. The people who live there would be really wealthy traders who find it easier for business and regular townsfolk whose main source of income would be accommodation, food and other things for the people who come there, as well as a tax levied on all airships that dock with the city.

My world has no magic of any sort, and though the setting is a bit medieval, they have good technology (like steampunk technology, not computers and robots). An example of this technology is a giant condenser in the city that extracts moisture from the air to provide usable water for the residents.

Is this method of building a city even possible? If so, how big could such a city be (in terms of physical size and population)?

This is my first question on this site, so if I need to fix something please tell me in the comments and I will edit the question.

That depends on some details of your world. As you said, there is no magic in your world, there are a few problems your city would face to stay up there.

Foodsupplies
Space on an airship is scarce. This city will depend on supply from rural areas below it. Every medieval city depends on whide areas farmlands but here you have to keep in mind that all those ressources, not just food but also wood for building/repairing and everything else has to brought up there. You need to think about a transportation system.
space
As already said, there is not much space up there. Citys like Cologne have a population density of roundabout 2600 Inhabitants per squaremile and some newer studies suggest that this density was not that much lower in medieval times. But in your floating city, you want to reduce that, as you would need more than a half squaremile for what you have in mind. Even if we consider every ship the city is build of about ten meters wide and 100 long (and ignore the fact ships are not square-shaped) the city is build by 500 ships to get it that big. Every ship the city is made of costs money to keep it staying up there and not rotting to pieces. You could reduce this problem if you implement some kind of Wood in your world, which is highly resistant to rotting (or can be made that by any known process).
keeping it up
Most steampunk-technologies for airships depend on keeping them floating by burning things. To keep a whole city in the sky you will burn a vast amount of fuel/wood/whatever. Some realy lightweighted building materials could reduce that, but it will be your biggest problem to solve. It gets even more difficult as you have to connect all those ships, because as this city shall be a trade hub you have to be able to move high amounts of goods on stable ways and don't want to rely on cranes and knitters for transport all the way through your city.

I don't want to say it is impossible to build and maintain this city, but you have to solve some problems within your world (which depend on Details I don't know atm) so it gets feasable.

The main problem that you face is the fact that Earth is just not a good place for lifting things into the sky as there is limited buoyancy available for a given volume and a lot of cost and maintenance.

Changing the environment would make life a lot easier and since this has not been specifically ruled out in your question, I suggest changing the atmosphere to resemble Venus. Which might sound strange but it comes with some surprising advantages for flying cities.

On Venus at about 50 km above the surface atmospheric pressure is roughly 1 bar and the temperature is 0-50 degrees C. There is still roughly one Earth’s atmosphere equivalent above protecting from cosmic radiation. But the atmosphere is composed almost entirely of carbon dioxide which is very much heavier than air.

This means that a sealed airship filled with Earth air at 1 atmosphere would float and could carry considerable cargo as well. So no need for a tiny gondola slung underneath a huge lifting bag, no need for gondolas – just live in the lifting gas (Earth air) inside the envelope.

By adjusting buoyancy it would be possible to move up and down through various wind streams so navigation would be possible to some extent. On an imaginary Venus like world (adjusting the pressure and temperature and distance from the Sun etc) it might even be possible to land on some of the tallest mountains where all mineral needed for construction could be found. And for day to day living water could be extracted from the atmosphere as well as oxygen.

Such a city could grow to huge proportions and if allowed to move with atmospheric currents would not be subject to much stress. People could even work outside without pressure suits, but a mask and oxygen supply would be needed, small tears to the envelope would not lead to catastrophic failure and such a structure should be well within the scope of a steam punk type civilization.

Buckminster Fuller speculated on this as far back as 1960 with his "Cloud 9" Tensegrity sphere. The basic idea is to continually increase the size of a geodesic sphere until the mass of the air trapped within is greater than the mass of the structure (Fuller calculated that a sphere with a radius of 1320 feet would rise if the internal temperature were 1 degree f above the ambient temperature, essentially the largest hot air balloon ever. Obviously this is the "minimum" case, so would be unable to lift very much outside of the supporting structure.

However, increasing the size of the sphere increases the volume, so more lift will be delivered. Some calculations of the effect can be found here: Can Cloud Nine be built? 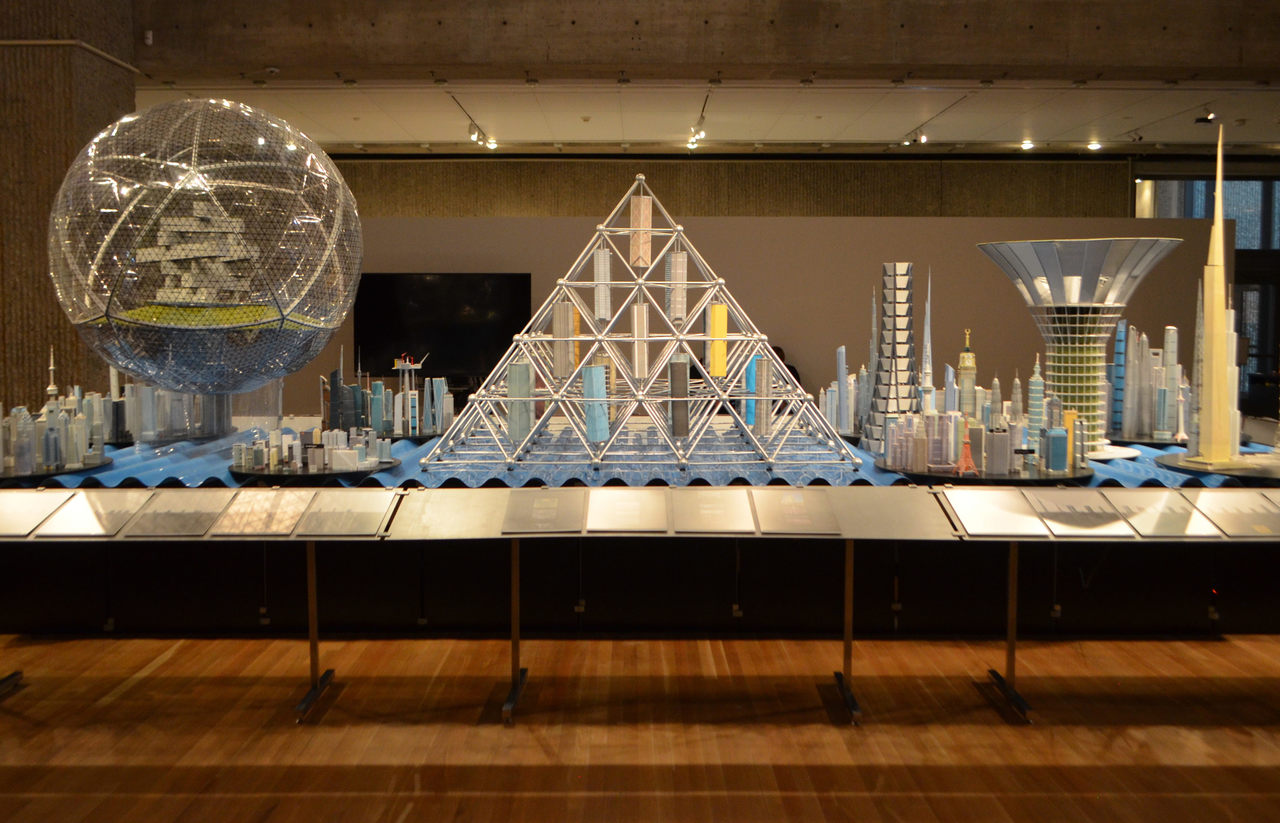 Scale models of megastructures. The Cloud 9 floating on the upper left may be the size of some proposed arcologies, but only houses about 7000 people 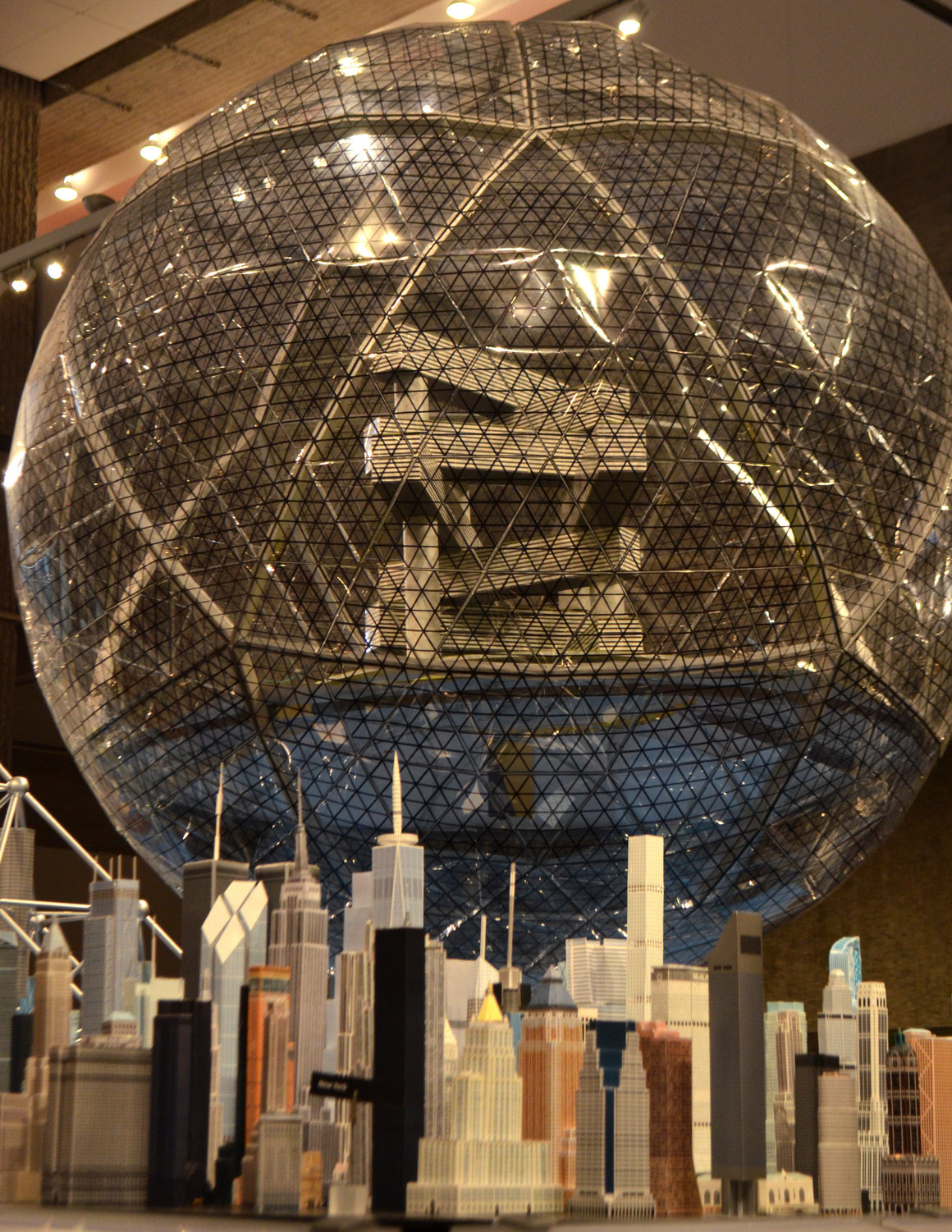 Cloud 9 to scale with existing skyscrapers

The real issue isn't "can this be built", although even with 1960 era technology it would be somewhat questionable, but rather the economics and logistics of operating the thing.

Given that even the largest conceivable Cloud 9's on Earth would have a limited lifting capability, virtually everything will need to be imported, and the city will require some sort of high value product or service to export in order to convince people to sell them food, manufactured products and so on. Since the Cloud 9 is extremely massive but also quite delicate (much like an eggshell), high value products or services will be at risk all the time from threats of invasion to bad weather events.

So while it is "possible" to build a Cloud 9, you really need to dig into the worldbuilding to understand "why" this was built and "how" it is sustainable over a prolonged period of time. I don't know of anyone actually trying to work out the economics or logistics of supporting a flying city like a Cloud 9, and I suspect there would be a multitude of other issues, such as the immense shadow, airspace rights and even how or if it should be tethered to the ground.

I would also have to question the idea of traders willing to pay tax to dock at an intermediate port. As a Zeppelin captain flying cargo, it seems much cheaper to fly directly to and from the cities and avoid paying surcharges to load and unload cargo at a Cloud 9. After all, how do they plan to stop me? Unless there is a very clear advantage to using the Cloud 9 as a "port", which you would have to identify, it seems like a monumental "prestige" structure which would consume a lot of resources to build, but never really pay back on the huge investment.

So yes, if someone is willing to pay the price and the technology allows it, a geodesic sphere over a kilometre in diameter would indeed function as the basis of a flying city, and can remain in the air so long as the internal temperature is higher than the ambient air temperature outside the sphere - which might be possible through solar energy and waste heat of the people and equipment inside. On the other hand, paying for and sustaining such a structure is not going to be easy, and you will need to identify the clear and compelling reasons that people will go through all that effort.

Not the answer you're looking for? Browse other questions tagged reality-check cities .

42
Can Cloud Nine be built?

11
Can sustainable farming be done in the suburbs in this supernatural post-apocalyptic scenario?
4
City-Closing Event
1
Would an aristocratic government be feasible in a sci-fi story?
12
Calculating City Size based on Population
5
Skysteading: How to build a flying city
9
What would be the an avarage and/or realistic population density be for an medieval based city?
4
Dusty city living
5
Plausible design/size of flying cities?
9
I need a systematic way to consider all crucial factors when building different kinds of near-future cities
1
What population size is reasonable for a moving, steam powered, predatory city?