I have this realistic version of Nintendo's Kirby.

It can suck in air (atmosphere on the world I'm putting it on is dense) and expand by using its bellow like lungs to rapidly pump the air into its gap layer beneath the stretchy skin (connected to the main body by flexible scaffolding; the face and limbs do not have this gap). It can then vent out the air through two port holes on the back to get a boost. This is used to defend against predators: to make itself appear larger; to escape by becoming airborne and jetting away. For sucking in prey, they have a filter to keep things from entering the lungs as they suck in.

But it is also semi aquatic. Meaning it must also be able to do this underwater. So could a lung-like organ be capable of extracting oxygen from both air and water? What characteristics must it have?

Yes through skin breathing would work, but I should have specified: due to how the bellow lungs work to inflate the creature or suck in prey, and the fact that this needs to also work under water, means that these lungs will have to push water as well, and I'm not sure how well lungs could handle that and what changes would need to be made to make it capable.

Betta fish have a specialized organ that can breath both air and water, and allows them to survive on very low amounts of oxygen compared to most other fish because they can swim to surface to breath. This organ is called the Labyrinth.

The labyrinth organ, a defining characteristic of fish in the suborder Anabantoidei, is a much-folded suprabranchial accessory breathing organ. It is formed by vascularized expansion of the epibranchial bone of the first gill arch and used for respiration in air.

This organ allows labyrinth fish to take in oxygen directly from the air, instead of taking it from the water in which they reside through use of gills. The labyrinth organ helps the inhaled oxygen to be absorbed into the bloodstream. As a result, labyrinth fish can survive for a short period of time out of water, as they can inhale the air around them, provided they stay moist. 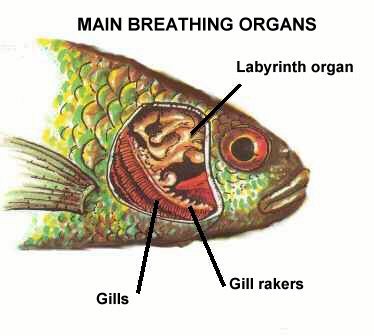 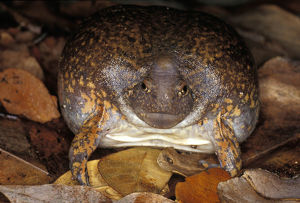 Respiration through the skin works for many amphibians. Some use only the skin, not lungs or gills. It works in or out of the water as long as skin is wet.

This is a good option for your critter. It has a lot of redundant skin so it can puff up. And your world has a dense atmosphere so there is more oxygen available.

Some shark species breathe through ram ventilation, which essentially means that they need to stay in motion in order to keep water flowing across the gills. Your Kirby-adjacent creature can already pump air through its body quickly to inflate and expel air quickly through vents, so adding gills to the vents would allow them to simulate ram ventilation by moving water in and out of the respiratory system very quickly. The water would travel through the respiratory system, and the oxygen would be absorbed by the gills in the vents rather than the lungs.

It is speculated that jaws made of bone first evolved from modified gills.

Keep the jaw as both mastication structure and respiratory organ, and evolve lungs.

This method is the coolest because it could be mainted for every animal, what if our ancestors never lost their ability to use the jaw to breathe underwater? You would a world filled with animals that can breathe on both land and underwater.

Structurally, there might be some similarity to the "book lungs" that a spider has. You might also look at the gills of an octopus, which are contained by the muscular mantle that lets them squirt water for propulsion, and keeps the gills wet for their brief forays above water.

Not the answer you're looking for? Browse other questions tagged biology or ask your own question.

15
Mermaid Buoyancy: Oily Livers, Swim Bladders and Lungs
4
What would an organ linking the nervous systems of two people look like?
5
A predator with pseudo-invisibility, partially achieved by airborne chemicals
1
Alternative origins for the lungs
6
How could a non round land creature puff up like a balloon?
1
Can you breathe underwater with fluid-filled lungs?
0
Figuring Out Monster Ecology
3
How would a plant like entity use animals?
2
Explaining Flight for Mermaids