What method would an average human use to move in one-tenth of earth's gravity with no prior training?

You are standing near a wall in an enclosed space of 50m(L) x 50m(W) x 3m(H) at floor level with 0.1G gravity and earth normal atmoshere. You are of average height and mass. You are suffering from mild space sickness. You are wearing a cloth one piece outfit and soft-soled shoes. You have only minutes of prior microgravity experience in a much smaller space. There a few largish obstacles scattered about at 10m intervals and no convenient handholds.

How would you navigate to a human sized doorway in the center of an adjacent wall.

We have already seen what happens in a similar situation--in lunar gravity we find it very natural to do a hopping motion like we saw the astronauts do--that wasn't trained, that's just what they did. The Mythbusters reproduced this--in a lunar-simulating airplane they found the astronaut's hopping felt natural and was easier than walking.

I do not think that going from .16g to .1g would change this, thus I would expect the hopping, then jump to the exit on the other side.

Now, if you truly mean microgravity (say, on board the ISS), someone who was told what to do would push off gently. Completely untrained they would likely jump and get hurt.

You can gently propel yourself forward using small foot movements and hand movements. You will bounce from floor to ceiling - hence the need for hand movements.

Your movements will need to be reasonably gentle or you could easily build up too much momentum to stop without hurting yourself.

Controlling your direction of motion would be a little awkward for someone with no experience, but you would do it well enough to get close to the door. Once close you again use gentle movements to get you to the door.

As pointed out by another answer you can also swim slowly in air, so if you find yourself drifting in mid air you can use that technique to get close to walls, floor, ceilings or obstacle again and use the hand-foot method after that.

A more experienced (or over confident) person could use a more aggressive application of speed and momentum to essentially push themselves rapidly at obstacles and make faster progress. This risks potential harm if they misjudge, but would be faster in an urgent emergency. However once at the door you again have to slow down which is non-trivial.

If you have earth normal atmosphere, pressure, and density, it would not take long to realize that you can swim through the air bu pushing air with your hands. It would be slow, bot steady. And using outstretched arms to start a spin, then pulling them into the body, would allow some maneuverability using conservation of momentum, again by pushing against the air density.

If there were air ducts, causing an air flow, you could also sail this air flow.

One particular tool, albeit no longer in use. A hand held maneuver unit or air gun. This device fired jets of compressed air, in microgravity conditions, early Gemini astronauts for maneuvering at various angles. 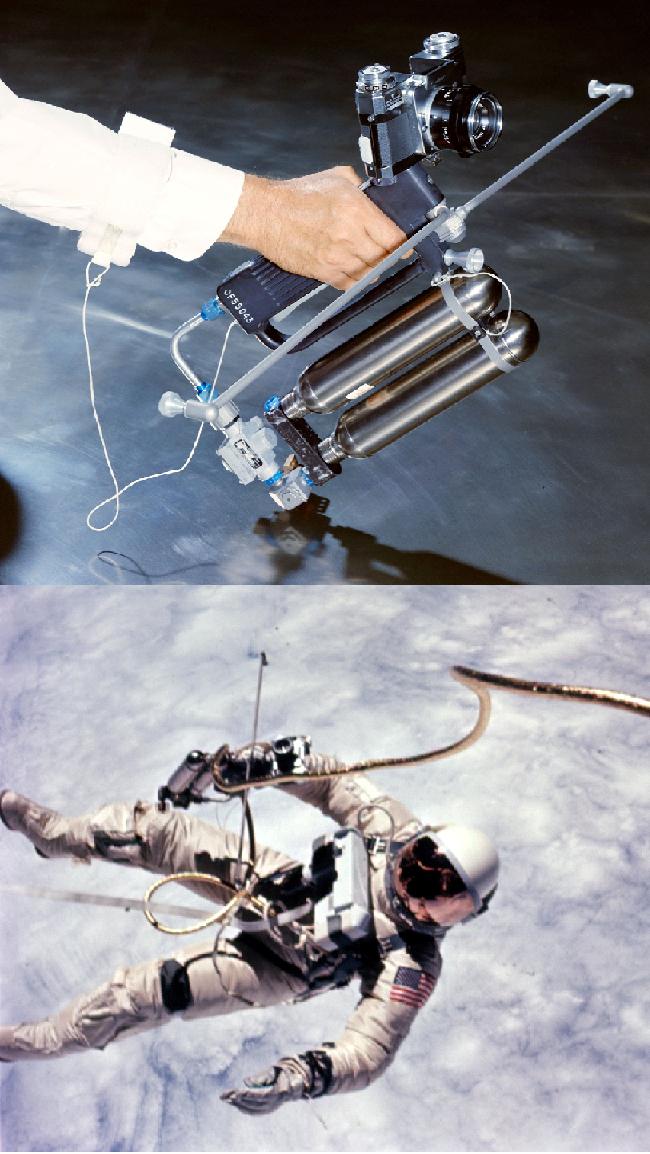 Push off with legs from the wall.

Then a long straight glide to next vertical wall, reorientation, and another push. 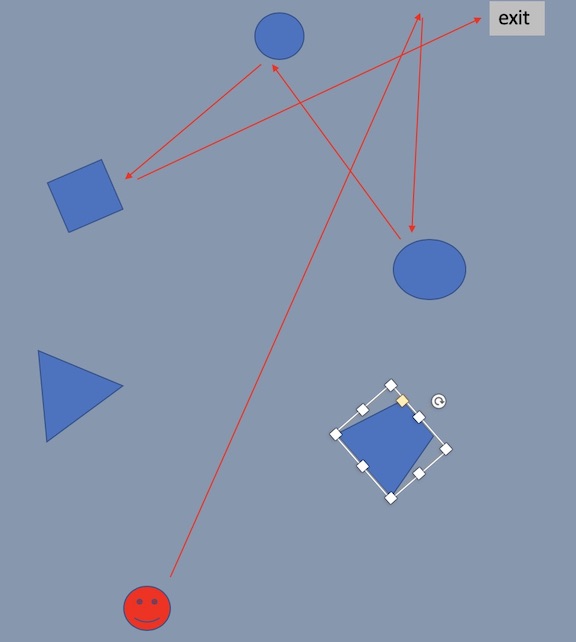 As though I were in a swimming pool, in the depicted scenario I push off with my legs against the wall and drift through the air. But my aim was off and I wind up to the left of the exit. I reorient myself in the air so as to land legs first. My reorienting does not go so well either and I turn more than planned. When I push off I wind up hitting the cylinder so far to the side I do not have a good angle to get the exit.

My push from the cube is on target and I get to the exit.

Probably I would bounce off stuff in the room many more times than that. But each time, the energy I impart is only what my spindly legs are capable of delivering, and it is no great thing to stop myself with arms or legs when there is something solid in the way. I reorient and push off again.

I might take off my shoes and do this barefoot - I think my sticky bare feet might have better purchase than the shoes. When I hit a vertical surface I have some fake weight for a second or two by virtue of my momentum and I can use this time to reorient with feet on the wall.

I put the shoes in my shirt and tuck it in; don't want to drop them!

Not the answer you're looking for? Browse other questions tagged reality-check humans space-constructs microgravity or ask your own question.

15
How to go out for a walk in microgravity?

61
Would the human body support living on planets with a greater gravity than Earth?
15
What justifications would people use to justify discrimination of people with special powers?
7
What language would droids use to communicate with each other?
4
Could a planet with three-quater earth gravity and neon-/argon-based atmosphere exist, and what would life do with it?
6
In what ways would the earth's orbit/atmosphere/ocean currents have to be different in order to create summer with long nights?
22
What laws, if any, would have to change to allow people with superpowers to use their powers for profit in companies/businesses?