I have a mega structure that is for all intents and purposes two halves of a planet that have been split in half and turned into opposite habitats connected by a central column. One of these hemispheres is a bit bigger than the other so it is tidally locked to a sun and contains a Venus like atmosphere which supports an entire ecosystem of life adapted to live in this intense heat. The other end is a tundra based biosphere that is tidally locked away from the sun and only gets occasional light from the reflected light off of a ring that orbits the whole structure. It is also inhabited, but by creatures that thrive best in intense cold.

Since there would be a huge temperature disparity between these two hemispheres, could they be used as a giant thermocouple to generate power for the mega-structure? If so, how much power could it yield? 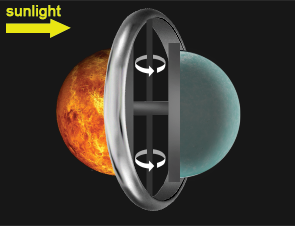 As mentioned by Stephen the Carnot Efficiency will determine the theoretical efficiency. Most heat engines will be well under that efficiency. However, since you are dealing with mega structures even a very low efficiency will be huge compared to needs at the human/alien, or even societal scales.
The material requirements of the separating column will need to be very, very special.

b) Strong enough to withstand variations in forces and fatigue over time.

c) Have some special feature to keep the atmosphere from leaking over the edge along the column.

However, the thermal conductivity of the column also needs to be low to keep the hot side and cold side from coming to equilibrium, and you will have a gradient of temperature along the length of the column. From a thermal engineering point of view you have.

a) Conduction – (this is why you need the low thermal conductivity in the column.)

b) Convection – if there is no atmosphere along the length of the column this could be negligible, but if you had a fluid, like an atmosphere around the column, or contained between an inner and outer column that could be very interesting since the fluid could be driven to move by the temperature and gravity differences. But lets ignore that for now.

c) Radiation – although not as bright as the sun, the amount of radiation from the hot side of the column to the cold side is probably non-negligible. This could be exploited by photovoltaics ( a solar cell but working in the infrared portion of the spectrum ) or by the cold side by having a heat absorbing layer on the cold have that could also be pretty hot, a thermally insulating layer and a cold layer with the two sides connected by thermo electric generators. Having a hot layer on the cold side could also be exploited by more traditional heat engines by having the insulating layer breached periodically and heating selective areas of the cold side and having the frozen gasses convert from solid to liquid or gas phase and drive turbines that rotate coils in magnetic generating potentials as massive generators. You can also do the reverse on the hot side, but this would be harder to think through.

Along the length of the column since there is a temperature gradient, if you think of it in terms of segments, each segment has a hot side and a cold side. This could also be exploited for heat engine purposes.

a) No moving parts

c) Generates potential difference – and current when connected. Good for electricity based civilizations

a) Seebeck and Peltier effect of materials depend on material properties, and are temperature dependent, so different materials would be used for different temperature ranges. For high efficiencies materials are sometimes complicated. Around room temperature many are bithmuth, tellurium, selinide or lead based which have low melting points. At low temperatures the carriers can freeze out. At higher temperature materials like silicon can be used.

b) The voltage of a thermocouple junction from dissimilar metals is small, so to build up a large voltage you need lots of junctions. Same thing with Thermoelectric generators. This might be good or bad from a story point of view. Since areas where there are lots of connections could having higher voltages than other ways and presumably this might be important to whoever was extracting the energy.

c) If the hot side and cold side reach the same temperature there is no potential difference. So the thermal engineering of the materials is important. This can limit current that the devices can produce since in addition to lattice vibrations the electrons also are component of the thermal conductivity.

a) Pyroelectric and piezoelectric effects. People are more familiar with piezoelectric effects. When light or heat illuminates a crystal you can also have pyro-electric effect where a voltage is generated. These are made for infrared detectors. The disadvantage is that the voltage is only produced when the temperature of the crystal is changing. So if you mega-structure had some kind of moving component where the radiation from the hot side was periodically blocked, or shadows moved across surface that could be another method.

b) Vacuum is probably your best thermal insulator. However, you can engineer materials at the nano-scale to disrupt the lattice vibrations (phonons) and vary the thermal conductivity of materials pretty dramatically.

c) Heat used to be thought of as being incoherent, just diffusive, however as people get better at making metamaterials and building complicated structures at small length scales they are finding that they can control the emissivity of surfaces and the directionality at which heat is emitted from surfaces in interesting ways. 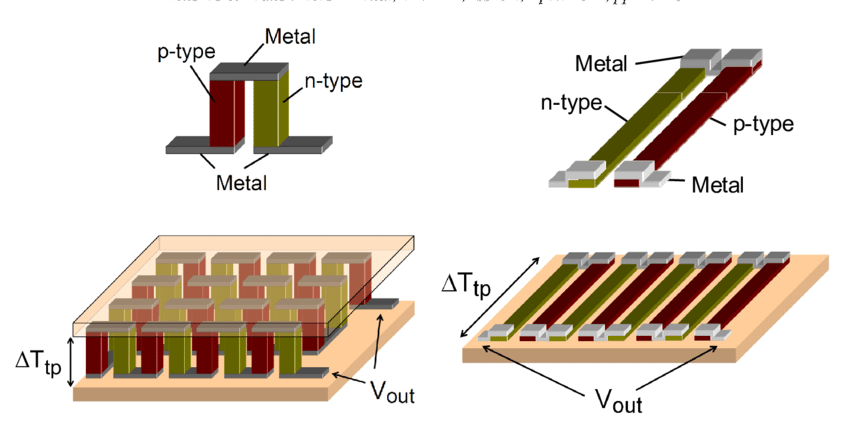 Schematically, the figures show the main issues and how you connect the dissimilar metals or thermoelectric materials. You can have them planar like the right figures, but if the distance gets long the resistance of the materials can be an issue, but it might be easier to keep a higher temperature difference. If you have an approach light the left side since the distance between the top and bottom is small it is hard to keep a large temperature difference. In both cases the amount of couples that are made needed to be added in series to increase the voltage (but also increases the resistance). In increase the current you put the modules in parallel.

Where $T_H$ and $T_C$ are the temperatures of the hot and cold reservoirs, respectively. For Venus-like (735K) and tundra-like (250K) temperatures this is somewhere around 65%.

Therefore the upper limit on the energy that could be extracted is $\eta$ times the solar irradiance incident on the hot hemisphere, which depends on the radius (hence area) of the planet, the radius of its orbit, and the intensity of the star. This could be as high as $\mathrm{10^{16}\ W}$ (using the actual values for Venus), a tidy sum for a megastructure, but this neglects the need for the system to be in equilibrium, which means that most of the energy incident on the hot hemisphere is radiated back into space, not absorbed and then recovered by the engine. For Venus, the energy absorbed at ground level is as low as 5% of the total incident; but even adding a couple of extra zeroes for conservatism and inefficiency, saying that the engine recovers a terrawatt of power would be entirely reasonable. Making the hot hemisphere larger, or the star brighter or closer, could increase this by a couple of orders of magnitude.

Of course the megastructure has to do something with all this power that doesn't result in it being released as heat again, or all bets are off...

5
Is it possible to have a civilization in the core of a planet?
2
Amoeba Skeletal Structure
4
How would gravity affect a structure that completely encircled the earth
9
How, and for how long, could a permanent storm be maintained on Earth by a stationary mega-structure?
2
How massive can a structure get on the inside of a Mckendree cylinder?
3
What is the tallest structure that can be built on the Moon? Can it be used as a landing pad?
20
What is the largest 'hollow' space structure that can be created?
16
Viability of a mega star system
2
What would the structure of a biological thermocouple be?