Most realistic method of creating a city-sized visible force field

It seems to be a really common trope in futuristic movies to have visible force fields, but based on a couple questions, it seems like it's not all too realistic to create a small force field (size of a doorway) due to the amount of energy taken. However, I was hoping to take a different look at this concept.

In the Avengers series, we see Wakanda sporting a large-scale, but not as powerful force field surrounding the entire city. At first glance, this seems largely impossible due to the amount of energy required to create a small field, but I think the metrics could be somewhat changed in this scenario. During the battle in Wakanda, it seems like the power of the force fields is somewhat weaker than the average force field, as there appear to be Outriders (bear-sized dogs?) that can push through the force field with enough power. Additionally, assuming that Wakanda's vibranium supply could be replaced with a realistic nuclear power plant, it seems like it would be within the realm of possibility.

One minor detail seen in the film, as well, is that there seem to be divisions of force fields, where some sectors can specifically be unlocked. This could lead to a theory that there are invisible force field emitters bordering each of these sectors, if that happens to help.

I'm wondering if it's possible to create the kind of force fields seen in this film, and if it's not possible, what relative scale would be more feasible (size of a small house, size of a person, etc.). As far as requirements for the field:

Not particularly sure if this fits the hard-science tag, so I'm leaving it as science-based. Thanks for reading, y'all!

Visible shields are not a well thought out trope. Unless you are using it to stop a persistent and ever present threat like radiation, it makes a lot more sense to make them reactive, not preventative. What I mean by this is that you would only project it where you need it for a few milliseconds, and then turn it off when the threat is past. By doing this you can multiply the shield's power efficiency by many orders of magnitude which makes passive shielding a pretty bad tech to invest in.

Just to put this in perspective, a basic shield window takes 8 kW/cm^2; so to passively shield a city that is 10km across you would need about 150,000 gigawatts. Even if you were to fill the entire landmass of the dome with a giant nuclear power plant and all of the supporting infrastructure that a nuclear power-plant needs, you would only produce about 26 gigawatts of power. This is not nearly enough to keep the shield up continuously.

Now if your goal is to stop a hoard of Outriders, it turns out you don't really need a full shield dome sense a shield fence would probably suffice, Outriders don't really seem to be able to vertically jump more than 1 or 2 meters, so a 4m wall would probably be all you need to stop them. A 4m perimeter shield around a 10km city would be only be about 126,000 m^2 which would only take about 10 gigawatts of powery. While far from practical, this atleast becomes doable.

That said, a visible full dome shield may be achievable anyway if you change your thinking a bit. What you could actually have is a physical dome made out of plasma windows. In this case you would have a "shield dome" over the city that is always there with or without power, and when a threat comes in, the needed window turns on to intercept it. In this case the city has an ever present shield dome without wasting 5 times the collective energy budget of the world to fuel it. This would work great with your Outrider invasion because if the whole city were put under siege where you needed to turn on a persistent ground level fence, it would pull those 10 gigawatts just to get a basic 8 kW/cm^2 shield window to hold the enemy at bay. Such a fence would burn like hell to run through, but probably not have enough repulsion to stop a moving body. But, if instead your city were to come under artillery bombardment, it could activate just a few windows at a time pouring those 10 gigawatts into highly concentrated plasma windows that could offer thousands of atmospheres worth of resistance just when and where they are needed both vaporizing and repealing just about any form of matter or energy you can think to bombard it with.

One final note: Plasma windows that are strong enough to repel physical matter are VERY bright. Basically picture a fire, then picture a fire that burns so intensely that it would physically push you back if you get too close. Now picture what would happen to your eyes if you were to look at such a fire... So, to make a science based shield that does not do more harm than good, you'd need to use a "dark plasma shield". There is some research to suggest there are methods for making plasma shields darker, but none have proven effective enough yet to safely and significantly interfere with ballistic weapons.

Use Utility Fogs for Force Fields 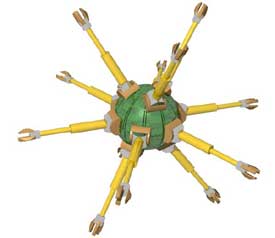 A utility fog, despite the name, is not a gas at all. Instead, it is a solid metallic mesh of 50 millimeter scale robots that move by holding one-another using small extending "arms" that can reach up to 50 mm from the center of the machine and end in "hands" that can grasp the next micromachine.

These machines arrange themselves as a network, structurally supporting one another and giving strength to whatever overall form the network takes. Because of this ability to modify their overall structure on-demand, they can assume a wide range of shapes, thicknesses, and mesh densities (# of machines per cubic meter).

Although frequently imagined as an always-moving dynamic mesh, a utility fog could enter a rest state where it retains all of it's strength (roughly 800 kpsi for a utility fog made of aluminum). 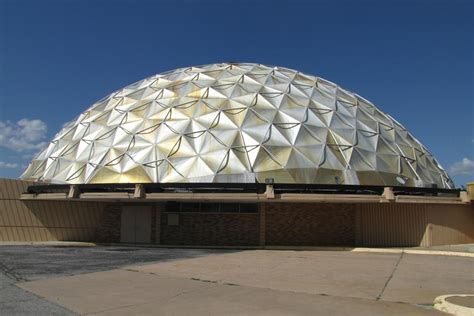 Because it is pretty spread apart, the material is mostly transparently optically. The computing part of each node is about the size of a grain of pollen, so the overall optical effect of a utility fog shield would be a hazy day due to high pollen count.

Additionally, the mesh could be plated with a nano-material that is functionally the opposite of Vantablack. That is, instead of absorbing energy, it could have an extremely high index of refraction to certain frequencies; greatly diffusing that radiation.

As an active material, utility fog could have many of the traditional sci-fi shield effects :

As seen in some shows, utility fog shields could also be used offensively. With safeties removed, the shields could crush, slice, electrically shock, or merely restrain personnel and vehicles within the field.

I'm going to take some inspiration from L. Ron Hubbard's Battlefield Earth. In that novel, the Psychlos had developed galaxy-spanning but very practical technology. And like any good author, Hubbard spent just enough time on the scientific theory to whet the reader's appetite, but never so much that it compromised telling a good story.

Great cables were laid underground, surrounding the cities and facilities of the Psychlos. The cables caused the air above the cables to align such that nothing could push through. Bits and pieces of trees, material blown on the wind, even birds would get stuck on the surface such that, when shut down, the debris would fall to the ground.

You could easily imagine something like creating a form of glass — made of crystalline air — and we would perceive it in a similar manner. We're used to seeing gaseous air, so the static air would look odd. Indeed, as light hits it at the right angle (just as it does with glass), it would shine and reflect.

But what about the science, and can we estimate some power requirements? I can't... but there is this:

DISCLAIMER: This is NOT my field of science. I haven't but the vaguest idea if what I'm about to discuss is applicable or appropriate. But it's fun to imagine....

Based on an excerpt from Advances in Nonlinear Optics it appears it's possible to align air molecules creating, at least, ions if not plasma (I think there's plasma... it doesn't help that Google won't let me see the pages before or after the excerpt. Is it junk science if you can only read a couple of paragraphs? Probably. I don't exactly know how the lasers are being used... but it sounds fun! Cheers!)

So, the idea of aligning air molecules exists. Can you align them with enough density to reject something getting through the screen? We can't do it, so we can't prove it, but why not? Think of it like weaving threads to create a trampoline. An impacting object might even be thrown back as the aligned air molecules reassert their dominance and snap back into place. And whether that article is talking about ionizing the air or creating or using plasma to create the alignment — the result is that you have a strong electrical charge coursing through the screen.

12
Pros and Cons of Laser and Projectile Weaponry
7
What does it take to make a permanent blindness gun?
12
What are the consequences of using limited anti-gravity for steampunk-style airships?
4
Force Field Contains a Star
7
Small-scale aviation without fossil fuels
9
(Somewhat) Realistic force field
5
Ideas to nullify the gravity of a Neutron Star?
3
Is there a way to trap a super-being like Dr Manhattan?
3
What threat would a highly technological alien species from a superEarth pose to human(-like) visitors?