What Is The Best Wing Design For A Giant Flying Animal

What wing design is best-suited for gigantic flying vertebrates, and why?

The wing designs I'm considering are Bat Wings, Bird Wings, and Pterosaur Wings. I'm leaning towards Pterosaur simply because the largest flying animals ever were Pterosaurs, but assuming that evolutionary lineage was irrelevant and we were looking solely at biomechanics and biological aviation capabilities, which wing design is truly best for something larger than anything ever seen before?

The largest flying animal ever known to have existed was the Quetzequatalus, which was around the size of a giraffe and 550 pounds give or take. Was the wing design truly ideal for a flying animal of that size? Or would a different wing design have been more beneficial?

EDIT: I forgot to mention the type of flight I had in mind, sorry. The mere ability to lift itself off the ground is a good start, and at the least it needs to be able to glide. Endurance flight is a best-case scenario in my mind. It basically would only use flying as a means of a shortcut in travelling.The sheer supposed cumbersome size of this thing would cancel out pursuit and acrobatics of any kind.

What does this animal need to be able to do? That's the guiding question. There's no one best style for a wing. Some creatures are built for speed, some for distance, and some barely fly at all.

The albatross flies over truly massive stretches of ocean. Here's its wing design. 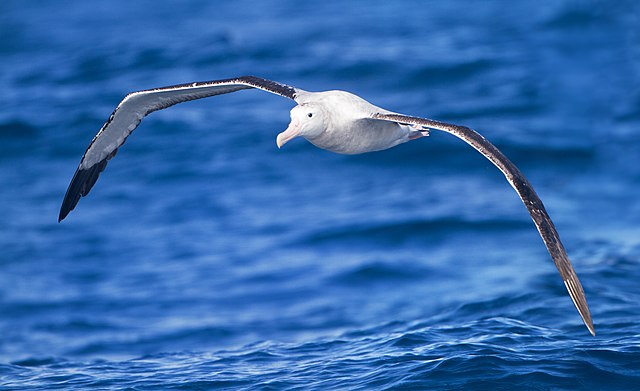 I don't know if you've ever seen a chicken flying but it's less impressive. That's because chickens and other game birds are built for a different type of flight:

[Game birds] can fly only short distances. This is because, despite their powerful muscles, they have little endurance. Game birds use their big flight muscles to take off in a near-vertical, rapid burst and fly for a short distance — called a burst flight — allowing them to escape predators.

You could design your massive flyer in whichever way the situation requires. Gliding, hunting, soaring, escaping, and foraging all lend themselves to different wing designs. Want a species that can fly across the ocean? It would be a real challenge to make a long-distance flyer weigh so much, but with a large enough wingspan you could make it plausible. On the other extreme, you could make it more like a bird version of a flying squirrel, which can barely glide and can't sustain flight.

So your Best wing shape may actually be to take the best of three worlds. Use the distal taper of the Pterosaurs, the feathers of birds, and the continuous flight surface of a a bat which together will give you something similar to this:

Being a giant predatorial pterosaur that was apparently able to travel long distances, quetzalcoatlus, as well as other azdarchids, is considered a very successful pterosaur species, with their "reign" over the skies ending with the KT extinction event. With this information, we can clearly see that Quetzalcoatlus had the best wings for a creature its size...which predominantly relied on soaring and very powerful but spread apart flaps of the wings. Their wings were capable of sustaining them during flight, allowed for long distance travel and permitted their lifestyle.

So did the Quetzalcoatlus have the best wing design for a large creature with a lifestyle like quetzalcoatlus'? Yes. Was it the best wing configuration among all possible kinds and superior to any other wing in every way? No. Quetzalcoatlus showed is that pterosaur wings allowed for large flying creatures to exist, but I doubt that quetzalcoatlus would ever be able to catch a flying bat (wild speculation but, yes), because bat wings, with their large amount of articulation, allows their owners to do incredible acrobatic and evasive moves, as well as achieve decently high speeds in certain species, with the Brazilian free-tailed bat being the fastest flying vertebrate regarding powered flight, clocking at 160 km/h.

So that means bat wings are superior? No. Bat wings may allow for decent speed and great maneuverability, as well as high dodging capabilities and some level of hovering in certain nectar-feeding species. But in many cases you'll hear a bat flying by the sound of its flapping motion, something that'll hardly happen with an owl. Owls evolved special feathers that, combined with their slow flapping flying style, makes their flight almost soundless, so by the time you detect it, it'll be to late. Falcons on the other hand went for the "opposite" strategy, you'll hear them coming, but with their body an wings adapted to achieve high speeds (peregrine falcon still holds the record for fastest flying animal with its 320 km/h dives), it'll usually be upon you before you have time to do anything.

As far as it's understood, what allowed pretosaurs to reach the sizes azdarchids did wasn't just the wings, it was about the pterosaurs themselves, their extreme adaptations which resulted in animals the size of a giraffe that weighted less than a black bear and were assumed to take to the skies like a vampire bat.

Not the answer you're looking for? Browse other questions tagged biology xenobiology flight avian .

2
Could my Wyverns exist?

4
How heavy can a dog-sized creature be with wings about 2-3 times its size?
10
What would a Pegasus actually do with its legs while flying?
8
Can a feathered wing be also compliant?
11
How tattered can membranous wings get before flight becomes impossible?
6
Bee-like vertebrate flight surface
3
How would the wings of a sphinx or a manticore need to be in order for the creature to fly?
4
What's the scalability of this flying strategy?
6
Unique take-off strategies for six-limbed creatures?
8
Scaling up the bat wing: still a good alternative for a large flying animal or inferior to a pterosaur wing?
5
Could membranous wings work along with an exoskeleton?