I am working on a series set a few hundred years in the future where fusion power is common and starships roam between planets. I am trying to think of a way to power small Arms weapons and keep them feasible, so no laser rifles or coil guns due to a lack of power storage and heat issues. (unless there is a plausible battery that could be developed to allow for a few hundred rounds (1000kJ ) and have be less than a kg).

Back to the point, my main idea is to stick with chemical propelled projectiles such as bullets (caselsss ammunition).

The question: Is there a potential chemical/energy source that could be attached to the bullet that would be more compact and lightweight (and have the same output) as a traditional modern charge?

The ability to fire in space is also a prerequisite.

"You can have a fully automatic gun that shoots lead but without gun powder."

Below is a photograph of the Seneca Dragon Claw, a .50 caliber rifle powered by air. And the quote above is from a review of the Dragon Claw. This particular rifle is a single-round breechloader, but you could have an air-powered combat rifle and it would definitely work in space. 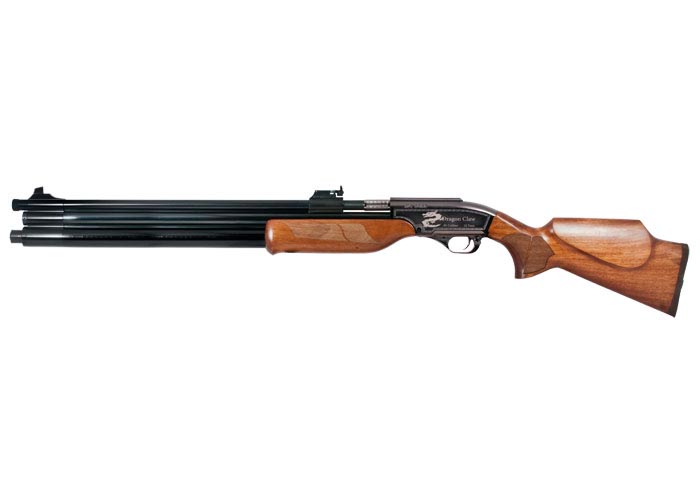 Not the answer you're looking for? Browse other questions tagged science-based far-future kinetic-weapons coilguns or ask your own question.

16
How would a lack of smokeless propellant affect WW1?
1
Hand Held Coil Gun cannon - Enough to rip a giant robot limbs into pieces
37
What kind of realistic ranged weapons would be effective in spaceship combat?
6
What's more viable as futuristic infantry weapons, rail/coilguns or laser rifles?
14
What are the risks with massive banks of batteries/capacitors?
2
Creating a steampunk-esque/cybernetic “Big Iron” revolver
9
Can biological material be magnetic?
6
Making a Plasma Gun that works
7
How can these kinetic weapons be made more plausible?