How loud of a sound would a human-sized cicada produce?

Cicadas are known to produce very loud sounds which they make by rapidly buckling their tymbals, some of which are loud enough to exceed the threshhold that causes discomfort in humans (110 decibels), though none are yet known to exceed the threshold where they might cause outright pain or hearing damage (130 db). Larger cicadas have larger resonating organs and are said to be able to produce louder sounds.

Given this, I am wondering how loud a cicada would be if it were scaled up to the size of a human being, handwaving associated issues like a cicada of that size would not be able to function because of the effects of the square-cube law on its exoskeleton and respiratory system. I know that size of a resonating structure is inversely correlated to pitch (frequency), but I am unaware of any clear-cut relationship between "loudness" (decibels) and size. I am specifically interested in whether this sound would be loud enough for the human-sized cicada to use as a sonic weapon.

EDIT: As JBH pointed out in their answer, there is a world of difference between what constitutes an "effective" sonic weapon depending on what it is being used for. For the purposes of this question, I am talking about a sonic weapon in terms of how most modern sonic weapons are used, an anti-personnel device used to incapacitate or cripple opponents, rather than a device that uses extremely high-power vibrations to blow holes in buildings or something like that.

Referencing the comments made by both @AlexP and @DWKraus and noting that one of the articles you cite states, "The detailed mechanism of the cicada's song is far from fully understood...." In other words, my answer is a best-guess.

A human-sized cicada would produce sound with a substantially lower frequency. Your largest cicada species (megapomponia imperatoria) is approximately 2.25 inches (5.5 cm) long with a wingspan of up to about 7.85 inches (20 cm). Since I don't have the ability to analyze with detail the tymbal (see image below, courtesy Vassar College), I can't be at all precise, but let's make some rough (OK, really rough) estimates. 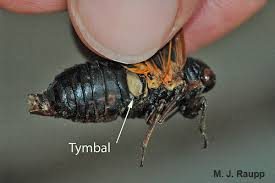 Now, a cicada's chirp is non-linear, but let's make another basic assumption. Cicada's buckle the tymbal 300–400 times a second. So, for convenience, we'll use a single average frequency of 350 Hz.

However, it is certainly worth pointing out that I've mixed apples with oranges. I've used the cicada's snapping frequency to cover for the fact that I can't find a reference for what frequency the single-snap "chirp" is at. This might be a massive (and most certainly is a massive) weakness in my answer — but I'm not convinced figuring out the specifics would change the conclusion.

Question #1: Can a human hear this?

Yes, the range of human hearing is 20 to 20,000 Hz. We'll ignore the fact that pretty much no two people are alike and that a bazillion things can vary those two numbers. But, for the most part, yup, the sound your human-sized cicada makes can be heard by the average human.

What a cicada is doing is little different than striking a drum with a stick. Increasing the size of the drum does not increase the volume. It's usually the opposite effect. Have you ever gone to see Blue Man Group and watched them use that giant drum? There's a reason that dude's whacking away at that drum with a honking huge mallet ... just as there's a reason why subwoofers usually need their own, separate amplifier.

It takes a LOT more power to produce hearable volume at lower frequencies than at higher. This actually makes sense when you superimpose a low-frequency sine wave with a high-frequency sine wave. (Example below courtesy ScienceDirect.com.) Simplifying the way audio works enormously, you're being "hit" by the low frequency wave once during a time period equal to its wave length, but many times during the same period by a high frequency wave. It's like being hit once vs. being hit thousands of times during the same period of time. To feel that single hit with the same "perception" as those thousands of hits, you need to be hit harder. 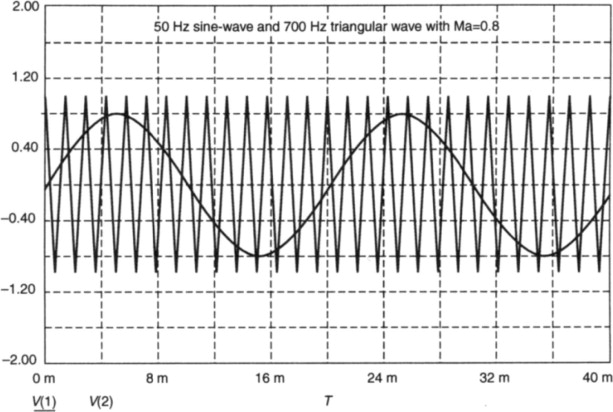 In other words, it's all about power...

But once you get the power at low frequencies — you can feel it! Unfortunately, that's where we run into a problem. Unless you make the assumption that the cicada's ability to put oomph into buckling the tymbals increases non-linearly with size, you'll get the deeper sound, but not a louder sound. In fact, you'll get a quieter sound.

That was certainly a debatable statement, and DWKraus points out that larger cicadas are louder in nature... but there's a lot of complexity involved here including the extent to which insect structure can be maintained as size increases. If scaling an ant, which can carry a much higher weight-per-body-weight than humans, to human size maintained that ability... then you'd think humans would have that ability... but we don't. I'm not a doctor and have never played one on TV, but I suspect that with dramatically increased size comes increased inefficiency, which is probably why elephants can't topple skyscrapers. That's my guess. But I could be wrong.

Your human sized cicada would make a substantially lower frequency noise at, at best, the same volume (phons/sones as @AlexP points out) as their normal-sized cousins. The sound would therefore be no more uncomfortable than hearing a teenager drive down the street with subwoofers blaring in the trunk of their car.

On the basis of being used by an individual cicada — I can't see this working as a weapon.

Now, if a whole swarm of human-sized cicadas started chiping.... Angels and ministers of grace defend us! (watch that video all the way to the end. The quote is from Hamlet)

Not the answer you're looking for? Browse other questions tagged biology physics weapons anatomy insects or ask your own question.

4
How would human-sized colonial organisms develop
17
How to make a Sound Gun
1
How to construct a loud sonic bomb?
55
How fast would a sword need to be to avoid getting blood on it?
1
What Would Be Needed To Produce Human Hermaphrodites?
17
What material would ant-sized humans use to make armour?
3
What anatomy would a human-like character need in order to produce in its body and spit/spray from the mouth a variety of liquids?
3
Could a human sized creature with a skeletal structure similar to a gibbon's be bipedal?