To the World of Death?

In a nearby star system to Earth, there lies an... interesting planet. Thirty thousand atmospheres of pressure, "surface" temperature of 5,500 kelvin, an atmosphere made of gaseous sillicates and vapourised iron, it makes Venus look like a paradise. So let's give it an appropriate name, like Hell.

Now, due to Alien Space Magic a portal 5m wide opens on the surface of Earth connecting to the surface of Hell at the present day. What happens to the area around the portal on Earth, and could we send a probe through to Hell that would survive long enough to send back data?

After exiting the portal, the iron-laden silicate gas is expanding and cooling from 5,500 Kelvin and 30,000 atmospheres.

The speed of sound for this expanding death world gas is $a$ = $\sqrt{ \gamma R_{specific} T}$. $\gamma$ has a different meaning here. It's the adiabatic index, and for diatomic gasses it's 1.4 (not quite the tri-atomic SiO2; but using this for now). T is in Celsius instead of Kelvin.

The death world gas is initially expanding from the portal at the it's speed of sound, 1,032 $m \over s$, or about Mach 3. Which would mean there's plenty of sound, noise, heat, and toxic vapor jetting out of this thing, but most of it is the higher-temperature, higher-pressure air expanding and cooling.

The volume at which the gas reaches Earth temperature and pressure $V_2 \over V_1$ should be 150 times the exit volume. For a portal 5 meters wide, I'd estimate you'd need a grid 750 meters on a side to keep people clear.

Some folks have asked about how much the portal to the death world starts to heat up the surrounding environment.

The heat passing through the portal is related to the mass flow rate, specific heat properties of the gas (glass), and the temperature difference between the portal and the environment

For scope, 80 terajoules is the amount of energy released by the first atomic bomb test.

Like the whistle of tea pot, or the rumble of an explosion, the portal will generate a sound that will carry for miles. I'd like the equation to figure out the frequency at the nozzle, but it escapes me at the moment.

Iron and silicon dioxide (glass) are both solids at Earth pressures and temperatures. The cooling dome of gas would project nearly 1 kilometer up, and look something like the ash clouds over erupting volcanoes.

Survivability of a Probe

At 5,500 Kelvin, the atmosphere of the death world will even melt the most temperature-resistant material, Tungsten. Additionally, the ground beneath the gate is a gas at death-world temperatures. You shouldn't take it for granted that the gate is not now floating inside a crater of it's own making.

However, electronics that can survive the forces of being fired from a cannon are now a real thing. 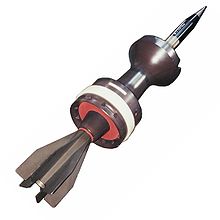 The main gun of an M1A1 tank has a muzzle velocity of ~1,600 meters per second. From the safe zone, it could propel a saboted sensor package across the gap and into the gate in under half a second.

The sensor package would capture as much as it could before melting.

However, there's another problem. The cloud of iron and glass gas is an effective block to radio and optical signals for the probe to send back. Sonic is unlikely to be effective either. Thankfully, some nice fellows have invented neutrino communication, which can communicate through solid rock.

The portal would be incredibly hot, with an explosive blast spreading at Mach 3 from the portal area into the surroundings.

Based on James McLellan's excellent, if (as of the moment I write this) slightly flawed answer, when this portal is opened, 5,000K, 30,000ATM iron-glass gas is going to erupt from the portal at a rate of around 600,000 metric tons per second.

Then we must consider that Silicon Dioxide has a specific heat of around $0.7J/g/K$, so each second we're adding $2×10^15J$ of energy to the surrounding area. That's on the order of a 476 kiloton bomb every second... or 2 petawatts of power... ten times the power output of the most powerful hurricanes.

Eventually, the Earth's atmosphere and crust will absorb the momentum of the gaseous iron-glass, and it will also cool enough that it will condense as a liquid iron-glass mixture, which will behave rather like lava.

Initially, I expect that this iron-glass gas will cool rapidly as it expands into the earth's relatively cold atmosphere, probably before it loses its kinetic energy, with the result that it will condense into a liquid iron-glass spray that still retains a significant velocity. It may even cool sufficiently in order to solidify before it loses its kinetic energy. At this point, there may well be sizeable droplets of iron-glass, but it is likely that there will also be a significant amount of finely divided material much like volcanic ash, that will remain suspended in the atmosphere for some time.

As the event continues, the earth's atmosphere will heat up, slowing the rate of cooling while still absorbing kinetic energy, meaning that eventually molten iron-glass will begin to rain down upon the landscape.

However, things don't stop there. The erupting gas will impart its kinetic energy to the earth's atmosphere, resulting in an accelerating hot wind in the direction of the jet cone. This will distribute hot iron-glass ash - and as the atmospheric temperature increases, molten iron glass - around the world.

The global temperature will rise to the point where the entire earth is blanketed in a pyroclastic cloud, until the heat from the jet of superheated gas begins to melt the ash deposits around it, resulting in a flood of molten lava advancing toward the portal. Until the weight of molten glass around the portal is sufficient to counter the outflow, the outflow will not stop.

If we consider a planet big enough to have an atmosphere such as this, it will have way more atmosphere than Earth. There is practically no way that it will run out of atmosphere before the earth is covered in a thick life-extinguishing layer of hot iron-rich glass.

Alternatively, the portal will fail at some point, saving the planet. Whatever continent it was on is probably completely wiped out.

As for getting a probe through the portal... without a railgun, there's probably next to no chance, and even with one, no projectile will survive more than a fraction of a second in such a hellish environment. The probe would have to be launched toward the portal at the instant or even before the portal opened to have any chance of making it through... and it is likely that if the scientists in charge weren't aware of exactly to where they were opening a portal, any probe and recording device is unlikely to survive long enough to be launched, let alone return any data.

I believe it can be probed, but the probe will be very limited in what it can do.

Start with James McLellan's idea of firing a large gun into it. He's got the wrong gun, though. We want a large caliber artillery piece, not a tank. (Yes, most artillery pieces can be fired horizontally. You don't see it because it's a last ditch defensive move, not something they want to do.)

To be flung back through the portal it obviously can't go too far from it and it can't survive the heat for long--the data package is insulated as well as possible, the instruments have a very short lifespan before being destroyed. The recorder is as light as possible, it needs to be blown by the wind far enough from the portal to survive and be recoverable.

Yes, but no probe. Map it from our side.

Not the answer you're looking for? Browse other questions tagged planets environment atmosphere or ask your own question.

5
What are some of the ramifications and consequences of this world's'“exoticness”?
12
What Color Can the Sky Be?
2
Would the death of 50% of the human population drastically reduce carbon dioxide levels?
16
Is a world with two different types of air possible?
13
How would the Death Star laser really work?
8
How can a world have permanent cloud cover?
5
How can a world have permanent dense fog?
4
How can the Progenitors oxygenate a world?
11
What color should the snow be in this chlorine world?
5
How extreme can a habitable tidaly locked world be?