I've seen a question similar to the one I'm about to ask, but it does not quite address what I want to know, so here goes.

I want to create an organism in which sentient individuals are actually swarms of eusocial creatures. I already know several things about this organism, but there are three important and interconnected details that I'm trying to nail down.

What I'm trying to figure out

EDIT: I'm pretty certain that, whatever solution I go with, their units all use some kind of signal which is in some sense encrypted. Not in a way they would consciously recognize (it's something they would have to do science on to realize it exists), but Swarm Alice's units use a different encryption key than Swarm Bob's. It would be complex enough to be more unique than fingerprints and probably the major reason that supereggs are physically contiguous as units for an incipient swarm converge on a signal. Nobody would have conscious awareness of the key their units use to encrypt communication: it would have be tested, and is probably the equivalent of taking fingerprints in the culture. Knowing someone else's key is personal information, of course, but it's hard to do something super nefarious with it: you can use it to send general biological signals if you know how to take the key and turn it into biology (e.g. tell drones and queens to make more units), but it's very hard to effect a change in a swarm's thinking with that key, because the signals used in thinking are unique, and emerge from an individual's personal experience. A single signal's purpose can be understood, a small signal cluster's purpose can be vaguely grasped, but the whole is beyond. Nonetheless, it works. Each unit can only understand signals with this key and filtration happens automatically. This solves problem 2 very neatly, suggests general ideas for getting around problem 1, and prevents problems from whatever type of signal used between units happening to be native in the environment or spread ambiently around by other swarms interfering with swarms in ways biological creatures would logically evolve to avoid.

Sound is remarkable, diverse and may be what you're after

There is some evidence that bee swarms communicate information between individuals and the collective via sound as well as dancing. It is long known that drones that explore come back to the hive and dance to communicate the whereabouts of food or new colony locations (which earned Karl von Frisch a Nobel Prize), however this is complex information that many suspect cannot be described by dance alone. By vibrating wings at very high frequencies, complexity can supplement messaging and may also be evidence that bees can communicate through sound to each other, constantly transferring information between individuals.

Similar, in fact, to modern drone swarms (but a sound equivalent of radio peer-to-peer drone swarm networks). As sound is a dissipating device, information needs to be constantly relayed: 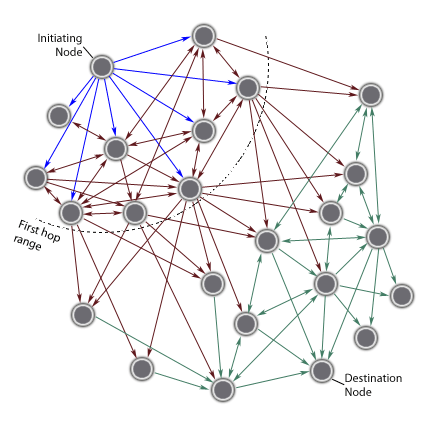 Evidence suggests that bees attuning sound frequencies and rapid changing of 250 to 500 cycles per second it is possible to transmit messages nodally throughout the swarm.

Furthermore, if complex distance and location information can be transmitted in this way, it may be possible for vibrations to be encoded to ensure every swarm has a unique signature. The huge range of not just frequencies now, but variations in message length, now supports identification and security information and allows different swarm interactions to be separate.

The mechanism of sound can allow your species to evolve in an atmospheric environment, and if you want them to be spacefaring, sound is easily transferrable to a technological medium independent of an atmosphere (like in our current communication, if you remember old-school modems using sound, but transmitted over telephone wires). Spacefaring species are likely to have a concept of technology at an advanced level, and their preexisting sound 'language' can easily transfer to light, radio, or other advanced methods such as simply visually accentuating and vibrating their space suits, to be visually perceived by neighbouring drones.

If they indeed are advanced and technological and can manufacture space-suits for their individuals, communication can then be particles (perhaps such as shooting actual atoms out in same frequencies) or even (although highly speculative) manipulation of fields other than EM fields (potentially even gravity for extra long-distance swarm communication).

They flicker with light.

Each of your swarm units flickers with light. By light I mean an enormous range of the electromagnetic spectrum. Just as a laser in an optic cable can transmit enormous amounts of information by flickering, so too your creatures. Different wavelengths are reserved for different types of information. Your creatures are able to perceive very slight differences in wavelength and so very rarely do two creatures in proximity confict.

I see you ask that communication "not be electromagnetic in nature" but you go on to discuss magnetic fields. Electromagnetic radiation is light from radio waves to gamma rays and I would not expect these flickers to be impaired on the short scales you are using.

this is very intriguing and it seems you have thought through a lot here - very cool to see where this will go :)

Some thoughts: 1. As for the means of interconnection within and across swarms, if you want to refrain from electromagnetic transmissions, you can use the surrounding particles in the atmosphere (think nitrogen molecules) or special nano-bodies floating in it (think flower pollen / dust ) as kind of a "conductive" medium through which signals can be carried across huge distances if needed (without the need for direct line of sight). An interesting implementation of this idea (although different enough so you can adapt it to your own) was used in the novel Rosewater ( https://www.goodreads.com/book/show/38362809-rosewater ) where this kind of conductive ether was used for the hero to receive "supernatural visions" and data on remote places. You could use something similar where each Unit can pass on the signal to its immediate neighbors and so on like a neural network 2. As for the "encryption", you can maybe find some more plausible mechanism which isn't quite encryption but resemble more the routing mechanics of IP addresses - making sure a signal reaches a specific recipient (unit) or subnet (a swarm) without being interperted or read or intercepted by another net through which the data is routed. Maybe some of the carrying bodies in the air have some electric polarity patterns that define a "subnet mask" or "IP range" for which the signal is meant to reach.

Not the answer you're looking for? Browse other questions tagged science-based space xenobiology bio-mechanics consciousness .

6
How would micromachines communicate?
3
Eusocial colonies as individual, sentient organisms

5
How does my critter communicate across the liquid/air barrier?
8
Many eyes or fewer?
5
Creating a new domain of organisms
10
Creating a scientifically semi-valid super-soldier, part 8: Communication
3
Eusocial colonies as individual, sentient organisms
4
Dyson swarm and Coronal mass ejections - generating electricity
6
Interacting with a sapient swarm intelligence
4
Mental characteristics of a sapient swarm intelligence