What kinds of wounds would a laser weapon leave?

I've got a bog-standard, handwavium-powered, handheld laser weapon of the "realistic" variety (Lightspeed "shots", a mostly invisible beam, no "pew" noise). When I pull the trigger, an intense laser beam erupts from the gun and goes where the gun is pointed. Assume there's some sort of autofocus that counteracts typical laser problems or that beam coherence isn't an issue at the ranges I'm using it at. It is designed to be deadly and is capable of killing unarmored humans. It's destructive power is roughly similar to that of a modern military infantry rifle.

What type of wounds a laser weapon would leave will depend on the precise frequency, power level, and beam form (in particular, duty cycle). The exact same total absorbed power (combination of frequency and absolute power) will do very different things depending on how it is delivered.

Near-IR is probably ideal for near-future anti-personnel weapons. It's what actual military lasers use. It's a relatively easy range of wavelengths to produce. The air is transparent to it, but water (and thus exposed flesh) absorbs it strongly.

A low power laser will cause burns, but it will take a lot to make it lethal. You are unlikely to see more than second-degree burns over a small area, because unlike dead animals used for testing, actual enemy combatants are unlikely to stand still while you hold a beam on a single spot.

A higher power continuous laser will cause severe burns immediately, possibly flash-boiling moisture on and near the surface of the skin, and you can do a lot of painful damage by sweeping the beam across the enemy. In fact, you will do more damage that way, because a high-power continuous-beam laser is somewhat self-defeating: once it vaporizes a tiny bit of moisture and/or surface flesh, that very vapor shields the underlying material from the full strength of the beam--you waste energy further heating and expanding a stream of already-damaged material! Moving the impact point helps mitigate that.

A better mitigation, however, is to chirp the beam. If you shove the average power of the beam into a much-higher-instantaneous-power chirp followed by a gap, you can spend much less total energy on flash-vaporizing a surface layer (because you won't allow any time for heat to be conducted away from the impact point before vaporization actually occurs), with the side-effect of producing mechanical stress on the underlying material as the vapor expands; you then give just enough time for the vapor released by the initial chirp to dissipate before the next chirp arrives, eroding another layer of flesh, and causing more mechanical damage. With this strategy, you can rapidly drill into a surface, and then get more bang-for-your-energetic-buck by relying on the expansion of gas inside the hole to to blow the surrounding material apart, causing impact as well as thermal trauma. The goal in this case is not to heat the target up to a lethal temperature--in the end, what remains of the body should not have appreciably increased in temperature at all. Rather, the aim is to make very small amounts of the water in their body explode, and then dissipate, tearing chunks out of them without wasting energy on bulk heating.

This 1998 paper used a continuous 90 W Nd-YAG laser on a chicken breast. They report

In experiment 1, during the first 20 s of irradiation the tissue whitened due to coagulation but there was no ablation. At about 20 s, the surface finally began to dry and immediately a carbon layer formed. Thereafter, the absorption by the carbon layer enabled efficient laser energy deposition and ablation proceeded at a regular pace.

In experiment 2, a little India Ink was placed on the tissue surface to initiate energy deposition and elicit a carbon layer. The ink was immediately ablated and the ablation process proceeded based on a quasi-steady state layer of carbon created by the laser.

However 90 W and continuous is still a "gentle" beam. Some years ago I have been able to see the footage of a several kW pulsed laser fired on a raw chicken breast (apparently chickens are the de-facto standard for this kind of experiments). From the very beginning there was a lot of white smoke and the laser quickly pierced a hole through the breast.

This safety training of Arkansas University shows the effect on a human hand of the burns caused by the partial exposure to a reflected 2 kW CO2 laser. 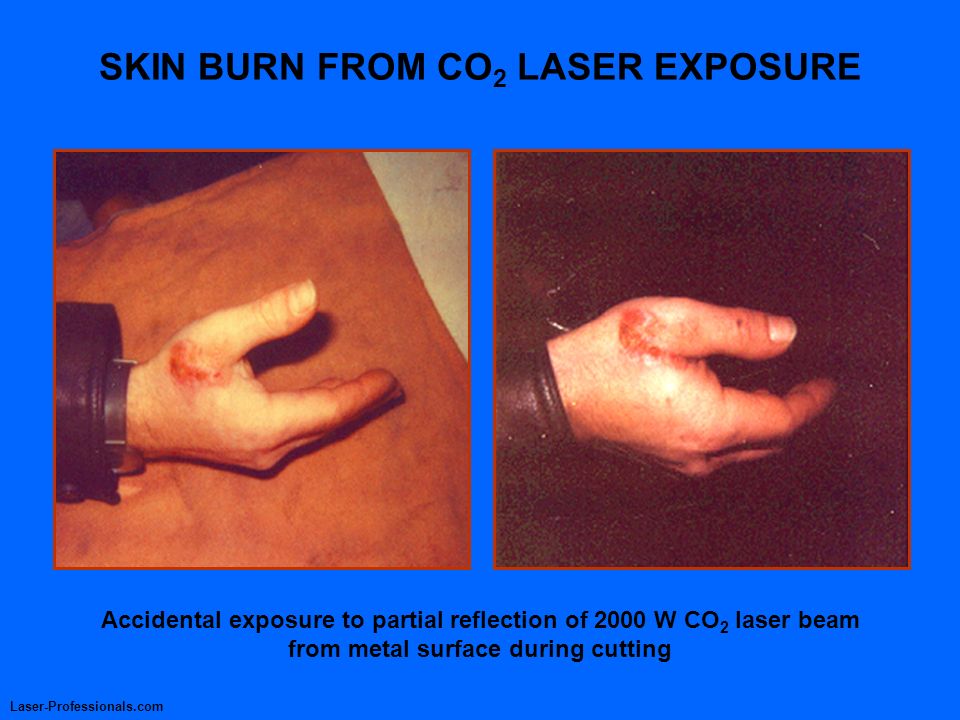 Assuming it's definitely weaponized, you'd have the equivalent of "pulse lasers", basically instead of a continuous beam, you have multiple pulses where the energy is dumped in a tiny duration beam, give the target a little time to "settle", then hit it again. Equivalent to 3-round burst from a rifle.

The short duration means efficient use of energy, just enough to hurt the target without wasting shot on the evaporated armor or whatever target is composed of that would have ejected from the target's material vaporization. But the delay between pulses should be minimal to ensure the target doesn't move enough to affect the aimpoint.

I must tell you this. There is a very, very large difference between a laser rifle and a plasma rifle. For starters, a laser rifle is not what you see in Star Wars or Star Trek, that's a plasma rifle. A laser rifle doesn't. make. much sense. to use. against humans. You see, lasers may be hot, but they need time to heat up the target. Unless this laser rifle is insanely powerful, consuming tons upon tons of energy, it will not kill a human. From your question, I can see that the weapon you speak of fires a pulse of energy. This pulse will travel at speeds beyond your comprehension, but this beam is nothing but high-intensity light. The keyword there is light. Said light needs some amount of time to heat the target up enough to cause any real harm, otherwise. it'll just light up the target and cause a minor burn.

Using this data, we can presume that a laser rifle is an impractical weapon against humans. However, it is more practical to use against vehicles or missiles. Like this: 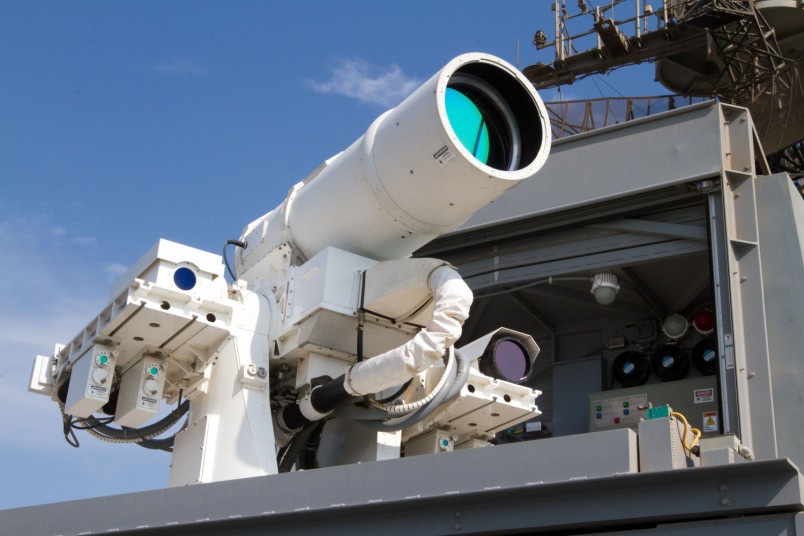 This is the US Navy's new missile interception laser weapon. If you've seen Cars 2, then you. might recall the laser weapon the antagonists used, it superheated the fuel tank of vehicles and caused them to explode. Here's a picture:

This is a far more practical application of lasers in weaponry.

Let's talk about plasma rifles. They fire a superheated bullet/ball of plasma which burns through the target, again, not as lethal as a normal gun, but better than a laser rifle.

Not the answer you're looking for? Browse other questions tagged science-based biology weapons lasers or ask your own question.

4
What would a lethal laser attack by a sorcerer look like?
7
Effectiveness of lasers of different wavelengths in space combat
3
What wavelength should I use for my ray gun?
4
What kind of wounds would a pulsed laser weapon really create?
20
Would laser weapons have significant recoil?
6
Does the technology to create a laser weapon naturally provide defense from it?
0
How would a 21st-century war play out if every country had these alien directed-energy weapons?