In the story I'm creating, a major weapon type of humanity will be Antimatter based weaponry. This is a fairly new technology, as antimatter production facilities have just reached the size and capacity to realistically produce the stuff in necessary quantities to use. I know that energy-density wise, antimatter is significantly better than anything humanity has produced up to this point, and as such would be more significantly powerful than thermonuclear weaponry. In the modern day, though it has been studied for use in weaponry by the US Air Force, antimatter is not used due to extreme production costs and low production amounts. Aside from production costs, what are the major downsides to using antimatter?

It is so hard to keep the matter out and the antimatter in.

To contain antimatter you would need some sort of supervacuum - maybe something that electrically charged any nearby molecules and then repelled them by charge. This would work a lot better in deep space where there are fewer gas molecules to begin with. That would work for charged cosmic rays too. You would have to hold the antimatter in place using magnetic levitation or the same sort of charge trick as you use to exclude the gas, directed inward.

All that makes conventional explosives seem so convenient and friendly.

When you're dealing with antimatter, there are 3 C's of challenges to overcome: cost, creation, and containment. The OP states that creating large quantities of antimatter is now feasible, and, I assume, cost-effective, so we'll treat the first and second challenges as solved. That leaves containment.

Containing antimatter is very hard, but, I'd argue, not impossible.

Picture a small solid block of antimatter, say anti-iron. Even 1 kg of the stuff would have a comparable yield to the Tsar Bomba, the most powerful nuclear weapon ever detonated$^1$. The best way to keep it contained is to magnetically levitate it (preferably above a high-temperature superconductor) in a perfect vacuum.

Let's first address the issues brought up by Willk in his earlier answer.

We can currently build massive vacuum chambers capable of maintaining 130$\mu$Pa of pressure. I'll assume that tiny amount of gas left in the chamber is just air at room temperature (to simplify my calculations, I'll use 300 K and assume pure Nitrogen, with a mass of 28 AMU per particle). The important thing is the order of magnitude. If any energies we get out of this are closer to a campfire than a nuclear bomb, it's probably manageable.

The total energy per cubic meter of the chamber, assuming all the gas is converted to energy, is the density $D$ times $c^2$: $\sim 131 MJ/m^3$. WolframAlpha says that's about as much energy as burning a gallon of gasoline. Admittedly most vacuum chambers built today wouldn't appreciate being set on fire, but this is the future we're talking about, and they're building this chamber specifically to hold antimatter. This is more campfire than nuke, so it's just an engineering problem.

Again, the quantities of mass we're dealing with are too small to matter. Here's a plot of the pressures caused by various metals boiling into a vacuum: 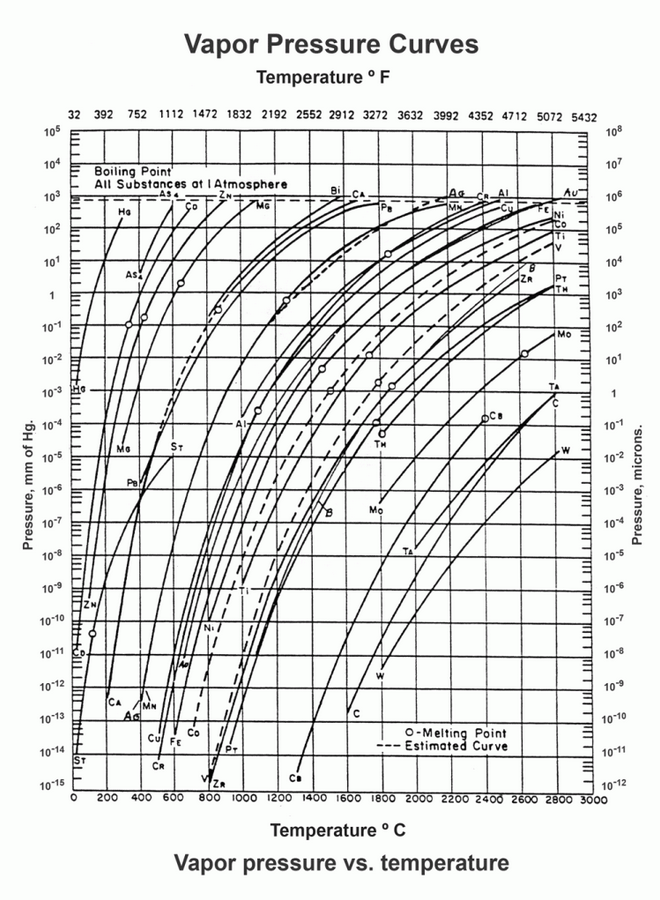 As you can see, iron (Fe) experiences so little vacuum evaporation at 300 K that its pressure is literally off the chart (even after you convert from mmHg to $\mu$Pa). As long as you don't build the chamber walls out of something with a higher pressure like magnesium (Mg), you probably don't have to worry about this.

No. Again, it's a matter of scale. According to Wikipedia, the total flux is only about $10^4$ particles per second per square meter (assuming particles with less than 1 GeV of energy won't even make it through the atmosphere). That's far lower than the ambient pressure of the vacuum chamber, so it's negligible.

So what do we have to worry about?

None of these things are disqualifying; an antimatter weapon is feasible with enough effort, funding, and ingenuity.

But honestly, is any of it worth it? I'd argue that that's the main reason why antimatter weapons aren't practical: we don't need stronger weapons. No two nuclear powers have ever gone to war, because nuclear bombs are terrifying enough.

$^1$: I'm assuming that all the mass will eventually be converted to energy via good ol' $E = m c^2$. This isn't a safe assumption for nukes, since most of the fissile material gets launched by the explosion before it can release its mass energy. But, on Earth at least, antimatter doesn't have this problem. Once the antimatter gets out, it's going to keep interacting with the surrounding matter until it's all gone.

As user110866 points out, though, where exactly that energy will go is very complicated since there's no sustained chain reaction, so I can't say for sure how much of that will be converted to heat or a shock wave vs just heavily irradiating the surrounding area.

Antimatter cannot be stored easily or safely. How do you contain it?

The risk to other matter such as equipment and personnel seems quite large. Larger than, say, using a thermonuclear device.

When a particle more complex than an electron annihilates with its antiparticle, the result is a mess of weird gluons whose ultimate child particles depends on what else they run into. Unless you're very careful to annihilate isolated particles, the way people do in physics experiments, you can end up with products like high-energy neutrons and gamma rays flying around. These are exactly the types of byproducts that irradiate the surroundings of a fission reaction and create radioactive fallout.

If you'd like to kill somebody without rendering the entire neighborhood a radiological hazard area, you should stick to lower-energy physics like conventional ballistics or explosives. Maybe a nice railgun.

Things to be used as a weapon require that you have a dedicated "arming" mechanism. It's good if the arming mechanism is redundant to the normal node of activation. It's also good if the mechanism is passive. For production of weapons its good if you have passive precursors and store only a small quantity of the unstable stuff.

So in the current view these weapons would be something like nuclear weapons, just worse (at least nukes don't explode when storing them). You would not want to hand out "antimatter grenades" to you foot troops in the scale of 10000s. You would not want "antimatter bullets" in the millions - it would be a logistic nightmare during an armed conflict keeping these safe - landmines, non detonated bombs are already bad enough without having an implicit timer and gamma-radiation poisoning.

So now let's look at the "classical" usecases

The only usecase (beside planet destruction) which i could assume is realistic is "controllable radiation mines". You design the containment in a leaky way that you get a significant amount of gamma radiation and you control the containment in a way that it is linear instead of exponential decay. So you set the load and the timer, and after a few hours it\s safe (if nothing was strongly activated to enter the area), but before that there is a deadly gamma radiation (before that the enemy has the option of destroying the containment - explosion + strong radiation pulse) or shielding it. make many small ones of these and combine it with stealth you can switch on and off the irradiation of the enemy controlled areas at bad times for them.

As others have pointed out, Antimatter is difficult to both produce and contain.

The most well known property of antimatter is that, for each matter particle, there exists an oppositely charged but otherwise identical "anti" particle. The complete picture is a little more complicated as other quantum properties are also reversed. For instance, anti-neutrons are electrically neutral, just like neutrons, but they have opposite Isospin and thus strongly interact like a proton. Thus it is impossible to trap antimatter in the form of a proton-antineutron, or pesudo-deuteron, nucleus.

The most difficult part of production is that antimatter is only created via very high energy photon-matter scattering. The exception to this is positron emission which is very rare. Thus the production of antimatter would require very large machines (particle accelerators) which would consume much more energy then they would produce.

The only anti-particles which can be captured are the charged ones since these can be contained within magnetic fields. Unfortunately grouping large amounts of charged particles creates an electrostatic imbalance, since magnetic fields need to be much stronger than the electric fields they contain, a small amount of charged antimatter requires disproportionately large, yet very precise, magnetic containment which is also very energetically unfavorable.

Aside from production costs, what are the major downsides to using antimatter?

Assuming you were able to over-come these obvious issues, there are some more subtitle ones which would need to be taken into account to use antimatter. @Cadence mentioned the important issue of the products of pair annihilation. To elaborate, pair-annihilation produces very high energy photons, which have the tendency to scatter and are liable to form pair production if anti-nucleons were annihilated. Thus it is very difficult to get a controlled amount of energy out of the interaction and thus it really would be difficult to use it for propulsion.

Using it as a weapon would pose similar problems. It is not a simple matter of computing the rest mass of the antimatter (times 2) to calculate the total energy transferred upon detonation since the high energy radiation will scatter.

The type of antimatter will be important, for example if only low KE positrons-electrons are used, the resultant energy will be too low energy to pair-produce upon scattering and the photons will propagate out in all directions. The reason that nuclear weapons are so incredibly destructive is because of their creation of sustained nuclear reactions; producing chains of highly exothermic reactions and thus enormous explosions. Antimatter annihilation would need to be calibrated to the right energy scale to produce similar chain reactions. Photon penetration tends to be very deep below pair-production thresholds, but this will decrease the tendency to produce sustaining reactions.

Not the answer you're looking for? Browse other questions tagged science-based science-fiction weapon-mass-destruction power-sources antimatter or ask your own question.

19
Earth is invaded by miniature aliens - can they win?

7
How to make antimatter batteries safe
0
Antimatter weaponry issues
5
Antimatter Explosion Signature
18
How would an antimatter reactor actually work?
10
In extreme cases, can skyhooks or space elevators be used to funnel extreme planetary heating
6
What tree type grows into the most dense forests?
5
Are Alpha and Beta-Voltaics the solution to the energy storage problem in Scifi?
10
Using brine as construction material for an ocean floating town