Can a galaxy be formed from a black hole?

I'm writing creative text and I'm curious to know, just as possibility, can a galaxy by any chance be formed out of a black hole?

As Renan indicated in their answer, material that enters a black hole cannot leave; the only way around this is through evaporation. Even then, the Hawking radiation emitted is largely in the form of photons, gravitons and neutrinos. Even neutrinos require a black hole of mass $M\sim10^{19}\text{ kg}$, which is unreasonably low except for a black hole in the late stages of its life. Hawking radiation is not going to help you form a galaxy.

However, black holes can cause surrounding material to form a galaxy. Supermassive black holes have the power to influence their local cosmological environment. Say we have an active galactic nucleus, emitting powerful jets thousands of parsecs long. If there are pockets of gas in nearby intergalactic space, these jets may collide with them, producing shocks that heat up the gas. As you might expect, the pockets could expand and collide with nearby gas, triggering star formation. This isn't conjecture; it's happened around an unnamed radio galaxy at a redshift $z=1.7$ (Gilli et al. 2019). The quasar has triggered star formation in 4-6 nearby areas of gas, ranging from tens to hundreds of kiloparsecs away.

Here's an image of the sky around the system. X-ray emission in the 0.5-7 keV band, as seen by Chandra, is in orange. The white contours show 1400 GHz (21 cm) radio emission, observed by the VLA: 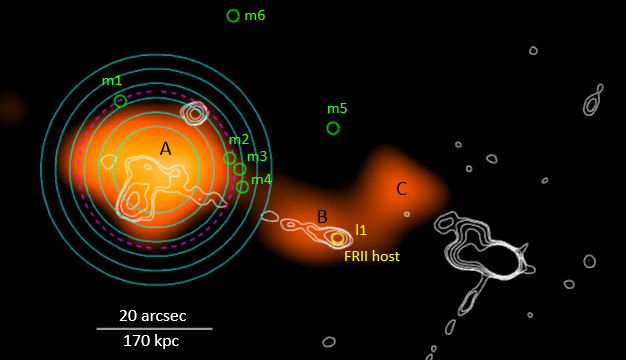 It's not clear if these gas pockets already contained stars; it's likely that they did. However, it's certainly quite possible that a similar setup could trigger star formation in gaseous overdensities that had yet to form stars and develop any galactic-like structure. These small galaxies are producing stars at a rate of approximately $\sim8\text{-}60M_{\odot}\text{ yr}^{-1}$ (For comparison, the Milky Way's star formation rate is currently only a couple solar masses per year). At this rate, that AGN could lead to the formation of as many stars as the Milky Way contains in about a couple hundred million years.

We've see, then, that a black hole can cause star formation, presumably also in star-less structures we wouldn't think of as galaxies. This is often considered to be what characterizes a protogalaxy: stars are beginning to form for the first time. By this metric, we could argue that that radio galaxy could indeed trigger the formation of a young galaxy - about half a dozen, in fact.

The only way black holes lose mass is by evaporating. Yes, that's a technical term. They shed mass by emitting Hawking radiation. This radiation is made of particles that simply get lost to space. Such particles are too fast and too light to coalesce into large bodies. They are also subatomic particles, which would have to go through extreme processes to become atoms.

On top of that, the most massive known black hole is TON 618, with a mass of about 66 billion suns. Galaxies as we usually think of them tend to be more massive by two orders of magnitude: the Milky Way has a mass of about 1.5 trillion suns.

They could in the form of ejected matter from a quasar.

As the blackhole draws in matter to the accretion disk as it feeds, matter is forced up to the poles and fired off in powerful jets, it is believed these jets can create stars and form new galaxies.

Not the answer you're looking for? Browse other questions tagged reality-check space black-holes galactic or ask your own question.

24
Protect a planet against a black hole attack
42
How would one destroy a black hole?
11
A supermassive black hole is coming our way. When's the latest that we would notice?
1
Can a black hole be turned into a white hole?
5
Could black hole civilizations even exist?
19
Black hole as a storage device?
7
Could I observe the black hole that created my area of space/universe?
6
Effects of my Black Hole Gun
0
A black hole prison?
2
How long would it take for a starship to escape from near the event horizon of a black hole?