What organs or modification needed to have tree that gain energy from lightning or electricity?

As the title: I want to know what kind of organs or modifications need for plants like tree to gain energy from lightning or electricity (and still fine or safe or alive of course).

Since I have a region that constantly has thunderstorm in it, and just recently seeing a tree get struck by lightning make me wonder about it.

I hope you realize those numbers are gargantuan, they are not too far from the solar power hitting our entire planet ($50 \cdot 10^{15}$ W). The lightning happens because the few kilometers of air between the cloud and the place where the lightning hits prefer to let that energy free instead of holding it.

Moreover the mechanism to store that insane amount of energy would need to act with the same time constant of the lightning discharge, which is from 5 to 500 milliseconds, and would need to be able to store it without releasing it back (see the atmosphere).

I don't think it is possible for a living organism based on life as we know it to be able to handle that amount of power while coming out of it alive.

As L.Dutch said, lightning is super energetic and any plant probably wouldn't survive it's strike. What I can imagine is the forest benefiting from some of its trees taking the hit for the team and burning down. Here are some ideas (which might not be realistic):

Roots could have some special conductivity. If a tree got it, it would still burn down, but also send a healthy amount of electricity to other trees. This by itself wouldn't be a benefit, but could be used as a way to transform the enormous voltage into levels that other trees would survive.

If a tree some how manged to create bark that acts like a wire or a lightning rod (such as encrusting is with large amounts of iron or copper) then there may be a way.

If the tree picked up the sighs of a lightning storm, such as the affects to pressure and humidity, then they could begin to store large amounts of carbon dioxide and water just below the bark. Then they would protect the leaves somehow (lots of options). When the lightning strikes the tree the energy will be used as a stand-in for light in the photosynthetic process and produce massive amounts of glucose from the carbon dioxide and oxygen it stored beneath it's bark.

Ideally this tree would actually be part of a massive network of trees to spread the energy but still most of the energy will likely be sent to the ground to avoid frying the tree. Being part of a network would make the whole process more lucrative as the chances of getting hit would increase exponentially.

Rather than focusing on the dynamics of the actual lightning bolt, perhaps you could consider the mechanisms that occur before to discharge and breakdown of the air. Lighting forms from cloud to cloud, within clouds, and from cloud to ground, but also from ground to cloud. 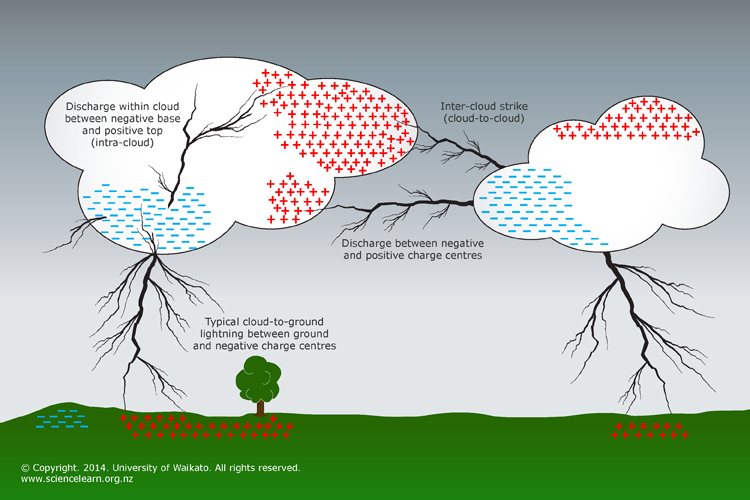 The Feynman Lectures have some discussion of electric fields in the atmosphere. https://www.feynmanlectures.caltech.edu/II_09.html and point out that we are walking around in a potential gradient most of the time anyway, so for your world you could look out how to have extremes of that. I think people have tried to come up with ways to capture the charge carried by rain drops, but it wasn't very successful.

In your case with the vegetation, as the previous posts mention, protective mechanisms to help discharge the actual strike might be more likely to evolve first, or might still be needed to protect the plant.

Anyway, the build up charge doesn't occur instantly, so perhaps there could be mechanisms that occur on biological time scale.

Electric eels have specialized cells each of which can have a voltage of about 100 millivolts, and then have several thousand of those cells stacked together to produce voltages of 800-1000 volts with substantial amperage that can discharge fairly quickly.

So perhaps there could be a similar like cellular structure where some form of rectification occurs when the charge build up is occurring, allowing a cellular battery like structure to charge up either chemically, or by polarizing a material. Or perhaps a super capacitor like structure could also be formed by the plant structure this would be a very high surface area organ within the plant where a conductive nanostructure is coated by an insulator. Although in our world on earth super capacitors tend to be low voltage devices. Or perhaps some genetic engineering is involved. 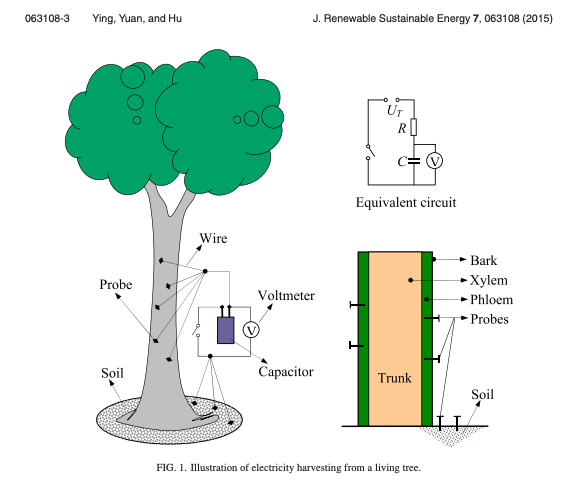 I think there's a problem in terms of evolutionary timeframes, in that conditions that cause persistent thunderstorms are very rare, and are very contingent on broader climactic systems, which change on what are, on an evolutionary scale, very short periods of time, so it's doubtful that any organism similar to a tree will be able to evolve in the time available.

I think an organism like this, an electrosynthetic rather than photosynthetic organism, could only really exist on a planet where lightning strikes are a more reliable source of energy than sunshine, which I think points to something like a rogue planet (i.e. a planet that has been flung out of its home star system), with a thick, energy-retaining atmosphere(1). I don't think these organisms, overall, would be particularly tree-like. I imagine what we would see is some sort of above-ground rod structure, to attract electric discharge, and below ground, quite extensive structures for dispersing the energy into usable quantities and converting the electrical energy into chemical energy, which can then be cached and used over time to maintain the biological functions of the organism.

(1) I used to assume that rogue planets would always be icy, frozen planets, seeing as they have no sun to warm them, but according to recent models, because these planets don't suffer from the atmosphere-stripping effects of stellar radiation, they are more able than you would think to retain thick, hot atmospheres over time.

It needs an Internal battery, batteries aren't too complex and one could imagine one biological version existing

Not the answer you're looking for? Browse other questions tagged science-based biology xenobiology flora plant-design or ask your own question.

3
Energy conversion and how it would shape society