The setting and technology level is late Medieval to early Renaissance. I have a character who possess the ability to create and manipulate flames, however, the power comes with a single drawback - notably, said character requires fuel in order to sustain the flames for any given length of time. Once created and sustained, he also possesses minor pyrokinetic abilities, i.e. he can direct the flames in ways that he wants, although it's not to the point of creating massive walls of fire or anything of that nature.

Given these limitations, I decided that the best weapon for such a character would be an oil-throwing gun. As in, kind of like a water gun, except instead of shooting out a thin jet of water, it fires a thin jet of oil, whereupon said character lights the oil on fire and uses his pyrokinesis to assist the now-firebolt into flying further.

Lastly, the more technical, the better! If you can give me an estimate of range or even give me diagram of how it might work, that would be appreciated.

You take a standard crossbow, and replace the standard bolt with something resembling an over-sized (about the size of your forearm) hypodermic syringe filled with oil. I'm going to lay some real bad MS paint artwork on you right now: 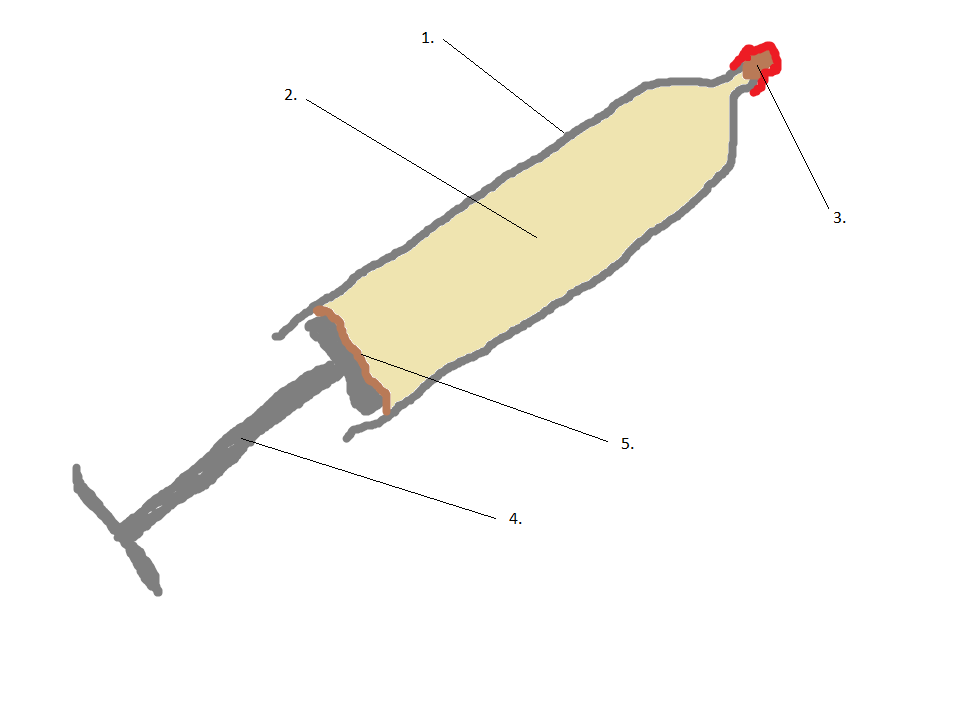 (1.) is your external iron casing, manufactured by a blacksmith by hammering a length of iron pipe around a mandrel to form the conical end. (2.) is the flammable oil filling, while (3.) is a wooden plug stuck in the end of your iron casing and sealed with wax to prevent leaks (though it will leak eventually). (4.) is the piston. When the crossbow strikes the back of the piston the pressure in the casing will pop the wooden plug out of the other end with the oil shooting out right behind it.

Energy transfer from just the string to the piston may be inadequate from a dynamic systems perspective, so you may want some sort of mass attached to the crossbow string to get enough follow through to get all the oil out of there (adjust the diameter and length of the casing, and diameter of the nozzle as needed to get the performance you want). You'll never get the metal piston and casing to seal by themselves with the technology of the time, so (5.) is a circular leather gasket that fills up the gaps. Seal the back of the piston with wax as well to prevent leaks. Don't drop the flaming candle on it in the process.

This whole assembly will need to be securely latched to the crossbow to prevent it from flying off when you get down to business, preferably with a quick release so you're not limited exclusively to New York reloads. EDIT: A latch isn't necessary (good in the time before replaceable parts). You just need a flange at the front of the cross with a hole big enough for the nozzle fit through and a socket that the casing fits in. You'd place the oil syringe in like a normal bolt, but when the string strikes the back of the plunger the flange at the front would keep the thing from flying off. Easy reloads with little additional fabrication.

All the above can be fabricated with basic metal and leather working technology, and certainly by any society capable of fabricating a crossbow. The materials would likewise be widespread. From an engineering perspective you're taking something that is known to work (syringe) and ripping it off to make something slightly different; it's a good way to know you're on the right track. Range will be similar to a super soaker, and will depend on the combination of the power of the crossbow, the diameter of the casing, and the diameter of the nozzle. Total oil delivery/time of burst will depend on the same variables, with length of casing and the force profile of the crossbow stroke as additional factors.

Okay... so you say in your question that you want "an oil-throwing gun; as in, kind of like a water gun, except instead of shooting out a thin jet of water, it fires a thin jet of oil", and you have not adequately explained how you think this can be reconciled with "a crossbow".

So I'm going to ignore the whole "crossbow" thing.

You already answered your question. You want a squirt gun. So long as we're talking about a "refined" oil (e.g. something you might use in an oil lamp) and not crude petroleum or tar, a squirt gun will work just fine. With sufficient pressure, you can get pretty good range (consider a garden hose, or for that matter, real flamethrowers; the kind that shoot napalm, not modified torches). So the only question is whether you can build such a device with medieval technology.

However... there might be a better way. Basically, you want to build a 'gun' with a liquid bullet. What you do is take a fuel tank that contains some air or another oxidizer and start a fire inside the fuel tank. Provide a suitable nozzle so that the expanding gas from the fire forces out the remaining fuel, which you then also light on fire and steer toward your target. Design the tank so that it is quickly replaceable/refillable... although, if the nozzle is part of the tank, you may have a serviceable single-use weapon. (Another option might be to have a separate combustion tank connected to a larger "ammunition" tank with a valve.)

Essentially, you are making a bottle rocket, but with oil instead of water, using combustion to generate pressure rather, and you want the "rocket" to be stationary so you can use its "exhaust" as a weapon (a la the Kzinti Lesson 😉).

In a comment, you mentioned: "Ideally, the crossbow firing mechanism should help fire the oil somewhat". Perhaps instead of a pressure chamber, you pull a little oil into a smaller tank from a larger "ammunition" tank (through a one-way valve), then use a bowstring connected to the piston to force the oil out (basically, the piston replaces the crossbow's quarrel).

This still isn't a "crossbow", exactly, but it at least incorporates the mechanism from one and does not need a pressure tank (although the "barrel" still needs to be able to withstand some pressure). However... I'm not sure this is actually practical. Bowstrings and similar mechanisms are designed to deliver force quickly. Driving your piston does need some force behind it, but unless you're okay with your oil jet having an extremely short duration, it needs to sustain this force for a longer period of time. I'm not sure that a bowstring will a) behave in a satisfactory manner for this purpose, or b) have any advantage over a piston that you pump with your arm, directly. It will also take longer to reload compared to just using your arm.

For either version, you might want some kind of valve before the nozzle that stays shut under low pressure but opens under higher pressure, so the weapon doesn't just leak out the oil when it isn't being fired. If you're very careful about how you carry it, you might be able to get away with just a tube between the 'ready' oil reservoir and the nozzle with an air-gap between the outlet of the reservoir and the nozzle that will be higher than the oil level in typical carry positions. Note that, if your piston is at the back, this probably means a tube that runs from the front of the weapon to the back, then forward again, as in this (piston not shown):

Take a conventional crossbow and fire darts with the head consisting of a small sealed pot filled with combustible.

Fire the dart at the target and once it crashes of impact spreading the combustible around, set it on fire with the pirokinesis ability.

Range will be roughly the same of a normal crossbow, construction idem, you just need to modify the dart head.

There were many different kinds of crossbow during the time period in question. You could definitely use a crossbow style of weapon to launch liquid downrange. If you want to do so with a sense of style, you could use a container that's designed to split in half when fired. This is called a sabot, and below is a high-speed picture of a modern sabot-discarding round.

Sabots are not normally used for liquids, but normal armies don't have magical powers. Your crossbow would fling the round a short distance downrange and scatter the oil into a cloud. Then your hero would ignite it and guide the flaming oil using his power. This would give your hero a reason to use a normal crossbow.

(Sidenote: When researching this answer, I was surprised to find a 1990 patent for a sabot-discarding archery arrow. The nineties were a weird time.)

Flamethrowers were invented numerous times in the ancient world, by numerous cultures. Adapt any of these to your uses:

Crossbow schmossbow! Your character is a Firebreather! There are many videos on fire breathing; the linked uses various yummy powders. There is much precedent for firebreathing and once clouds of flame are rolling, your pyro can scoot them around for fun and profit.

yes, yes, the OP says crossbow. Somehow a crossbow must be involved. Your character protests he has been blowing fireballs since he was 9 but rules are rules.

I here assert that a fireplace bellows is a glorified crossbow, and seems a safer mechanism for blowing fireballs because you don't need to worry about inhaling a bunch of powder. Also, you can save your powdered milk for cereal eating and use powdered charcoal as your fuel. Your crossbow bellows routes its flow thru a forward reservoir containing charcoal powder, entraining powder as each puff leaves the bellows. Ordinary folks would have a flame source up front but your character does not need that. He can work his crossbow vigorously, puffing a good cloud of flame each time!

Not the answer you're looking for? Browse other questions tagged magic weapons medieval .

8
How could an airplane defend against an electromagnetic pulse attack from another airplane?
27
Projectile weaponization of water
2
Utilizing oil as an incendiary weapon
2
Creating a steampunk-esque/cybernetic "Big Iron" revolver
6
How long could we preserve technology post-apocalypse?
12
Feasibility of an endothermic gun
7
How could the sword be a viable weapon against modern technology, with the advantage of science-based superpowers?
5
Is there a weaker alternative to gunpowder?