you know a jaw or mouth where the jaw full of teeth fully rotate like a drill or gear to shred their food or prey, usually show often in worm type of monster (my question is not necessary to be worm type), rather than chewing, or simple biting, or simple enclosing and opening the mouth with the circle type of jaw or row of teeth like lamprey or leech

here a gif image to help imagine it better, just focus to the blue gear, ignore the smaller one. (depend to the answers or how well this is, i may add another question related to the small one later)

just to be clear my question is about full rotation not half rotate, like when the jaws move back and fort in half circle to grind or shred ( i hope its understandable)

example like this, this is the closest i can find.

the gif from Gfycat

so i want to know how it work or the anatomy or musculature to achieve this, preferably with image to understand it better.

or maybe there already exist an animal like that?

The closest to what you want are gizzards stones. Necessarily so, because the rotating part cannot be a biological organ in nature - not being connected to the body, it can't receive nutrients or be protected by the immune system.

If you think it serves your purpose, move the stones upper in the digestive tract. Careful with the respiration, though.

It's possible, albeit supremely unlikely

In other words, it's possible to build a mouth around the design of slowly sliding and rotating a solid, inorganic teeth ring inside the mouth using nothing but muscles. The muscles contract to tighten their grip on the ring and then move it, and relax to loosen their grip before sliding back. (It's like using your hand to spin a disk - you grab it, move it, release it, then move back.) It'll be a bit complex, but totally manageable. The real question is how to get that teeth ring. There are two methods.

Method #1) It's a former biological component. Similar to us, this species grows enamel-based teeth. The teeth then fuse to a bone ring, and the creature then seals the bone ring so that it's now nothing more than an enamel construct. The teeth ring is then released into the mouth by way of regressive growth of the gums holding it in place.

Method #2) The creature creates the teeth ring carefully out of materials and inserts it in. This means that the creature can make them whenever a new one is required.

Problem: What exactly is the creature making the teeth ring out of, and how is it accomplished? Too fragile is bad, and too hard means that the creature will have a horrible time trying to make it. It'll probably end up mostly making them from rock and breaking them frequently if that's the case.

It isn't possible with our current biology for the same reason we can't have organic chainsaws: we need loose parts. Everything in an organic being is interconnected by muscles and other systems like blood vessels. For you to have a jaw that spins in a single direction indefinitely, you'd need a loose set of bones and something to rotate them. Sadly you won't find this something in an organic being, because there is no muscle arrangement that can allow for that.

Sadly your design can't work unless you have mechanical teeth on an organic creature. There is simply no muscle arrangement that allows for this kind of spinning, so with our biology we can't have mouths with rotating teeth, nor organic chainsaws, nor animals that fly like helicopters.

This species could evolve from a predatory creature that feeds on much larger creatures. It would kill its prey using a long conical fang, and cut up its prey using a saw-like structure, and . Its prey might evolve to have sticky blood which traps the predator's fang. To avoid this, the predator may evolve to drop its fang to escape, and regrow it. They might later evolve to be able to reattach their fang. It may also gain an extra spine at the end of its saw, as a backup if it must discard its tooth. A mutation may cause development to change, leading to the saw-spine growing into the fang. This would allow the creature to disconnect its fang and hold it, and spin it using the saw. The saw could degenerate into a piston, with the spike becoming a large peg, and the entire system becoming optimised into a drill.

The only known biological gears in the real world are the thighs of some insects:

Planthoppers are the first animals found to possess a biological form of a mechanical gear, used in locomotion. (Crocodiles possess a heart valve with cog-like projections, but they have no cog-like function.) The first formal description of this mechanism was in the species Issus coleoptratus. The gears keep the legs in synchronization, allowing the bugs to jump accurately at an acceleration of nearly 400 gs in two milliseconds. The existence of the gears in planthoppers had been known for decades, but zoologist Gregory Sutton and his co-authors only recently characterized their functional significance by doing high-speed photography of the insects at Cambridge University. The gears are found only in the nymph forms of all planthoppers, and are lost during the final molt to the adult stage. It is suspected that gears are lost in the adult after the last molt because if broken they would be irreparable, crippling the insect for life. Prior to their discovery, it was assumed only humans had made and used gears.

The insect gears are not completely circular, but rather portions of a full circle. They only move back and forth, instead of doing full rotations. But an animal in your world could develop the same mechanism in the mouth, which would develop in order to synchronize jaw parts during a cobra-like strike. A quarter billion years of evolution and some layers of flesh over this mechanism could have the gear parts evolving to eventually become full circle and loosened from the rest of the skull. To have them spin only one way the teeth of the gear could be sloped - each gear will only turn one way. Back and forth muscular contractions around the gears can then keep them spinning.

Everyone has brought up some excellent points about how tissues need to be connected for an organism like this to function. On a macro scale, that’s true, so why make it be one organism at all? If you want a rotating jaw with teeth, have the rotating jaw be a separate organism that depends on the host, and that the host depends on.

There are plenty examples of obligatory symbiotic relationships in nature, e.g, lichens, or any number of animals that have a gut microbiome without which they can’t survive, and which can’t exist without them.

There are also examples of macro animal symbiosis,Ike the urchin crab which carries an urchin around for protection, and thus also helps the urchin move to new feeding grounds.

So have a second organism that symbiotically sets up shop inside your creature’s mouth. A good design might be similar to a strain wave gear:

Note how the gears mash together! That would be perfect for your purposes.

The internal ‘jaw’ helps the host chew up tough food from its hunts, and in return, the host gets it access to food by doing the hunting.

Your host organism could look like any number of things. The symbiotic jaw would likely look like a very ridged and rough version of a bivalve, in a more oblong and spherical design: 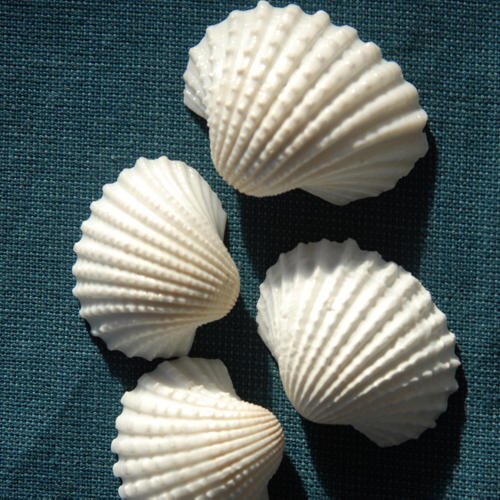 Well, I'm not an engineer or biologist, so I'll present only the raw idea without resolving many issues addressed to full design.

Instead of the common mechanical approach, it might be worth experimenting with electromagnetism (see: electric eels), which could help to rotate the jaw.

The teeth could form in the following way - when the species are young, their teeth are stationary, but their rings of teeth are 'removed' in a similar way that human teeth are during growth. However, that loose bone (ring of teeth) would still stay inside a mouth and be placed inside the new, second set of teeth-bone which would simply be like an annular rail that holds teeth inside the maw. Maybe there could be some sort of fluid that helps with friction-related issues too.

On the other hand, although I'm not claiming it's impossible in a proper setting, the evolution of these species creates a huge problem in itself. Even with a high level of genetic engineering, I would still support the idea that it's easier/cheaper to just design/maintain a mechanical counterpart.

Not the answer you're looking for? Browse other questions tagged science-based reality-check biology creature-design anatomy .

19
Naturally occurring wheels - do the 'mech' vs. 'tank' comparison apply to organics?
7
Anatomically Correct Propellers
3
What kind of musculature is needed to be able to have each individual tooth to spin like a drill?

6
Biological and ecological considerations for a giant worm
6
How can my creature use explosives to get the maximum bite force/speed?
7
How can my dragons use their tongues to control their fire breathing?
2
Injury to the lower jaw - what would be the consequences?
7
What is the bio-mechanical plausibility of humanoid vampyres exracting blood by biting into a person's neck?
10
Having a split lower jaw while maintaining a strong bite force
4
Hunting style of a feline species with doubled sets of fangs
5
Can the dunkleosteus jaw model work on a land predator?
3
What kind of musculature is needed to be able to have each individual tooth to spin like a drill?