What needs to be changed about the plate tectonics of my world?

So, after trying to make a few different world maps and not really feeling satisfied with them, I decided to attempt making a world a bit more from scratch, by adding in plate tectonics. Now, I did draw up the map first, but after adding in the plates I altered a few things, added some island chains, et cetera, which I think fit the tectonics better. That being said, I'm an extreme novice when it comes to this subject matter, and I've no real clue if my tectonics make sense or not. I'm sure I've made a lot of mistakes and there's things I'll need to change to have this make sense, so I'd appreciate any input.

I've included both a regular map of my world and a version with the plates added in. I've marked continental vs. oceanic plates, and the red arrows are supposed to show the rough directions each plate is moving in.

NOTE: Two of the island chains that are in the middle of oceanic plates are supposed to be formed over volcanic hotspots. 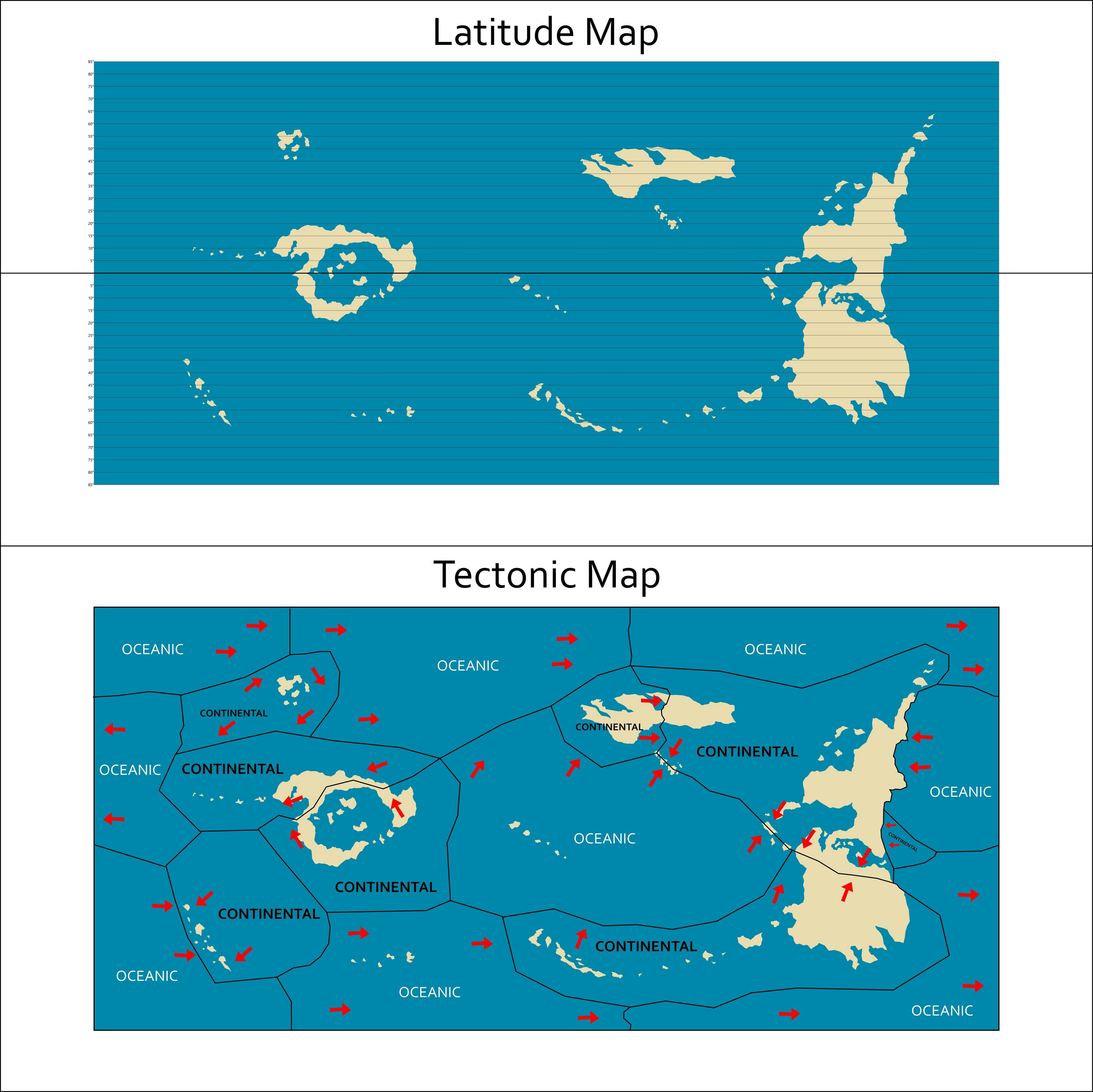 geography map-making tectonics
Share
Improve this question
asked May 25 '20 at 21:03

The degree of plate tectonics would be effected by a number of factors such as its size (the diameter of the planet). Its density (metallic content) and chemical composition. Also whether its tidally locked to its star and/or if its orbiting one a larger planet.

For example (anyone please correct me if I am wrong) there is little or no evidence that Mars currently undergoes significant tectonic activity. This is because its smaller diameter meant it cooled down faster than Earth has.

Same thing for a world with a less metal content than Earth but the same size . I 'think' the result would be less plate tectonics.

Being tidally locked to a star should also impact on the type/nature of plate tectonics experienced. I don't know nearly enough to predict how it would impact plate tectonics but it would/should. Your world itself wont revolve but its core will still undergo gravitation stress from being so close to its Sun. So even if it doesn't have a large molten mantle to begin with that stress will generate heat. Just like it does in the case of some of Jupiter's moons. If your planner does has an active mantle then the extra heat might means more tectonics and smaller plates, if it doesn't? - less tectonics and larger plates.

For more detail - best suggestion is ask a geologist or an astronomer.

I would add that on your right continent, it looks like a plate being pulled apart at the lakes, rather than two plates coming together right below the lakes. Take a look at North America--the Great Lakes and the many small lakes in northern US and in Canada, and up through those many small islands... this is all a result of the continent being ripped apart by tectonic forces.

Note that plates can have several interactions, and they can take place differently on different sections of the plate. It's all driven by currents in the magma below the plates, which act like conveyor belts. When plates come together, or converge, one will subduct. This creates a subduction zone where plate is being actively destroyed by being forced under another plate, into hot magma. If these two are continental crust, which is much thicker than oceanic crust, it's more likely to form large mountains. Even small islands are likely to scrape off and form mountains from accretion. Oceanic crust will subduct under continental crust. Subduction zones are hot spots for earthquakes, as well, and notoriously create very large earthquakes, though are often spaced out every several hundred years.

This is in contrast to emergence where new plate is being formed, often in the ocean. See Ring of Fire in the pacific for a classic example. These spots are usually very volcanic, and can create chain islands such as the Aleutian Islands in Alaska.

Hawaii is a bit of a unique case. You'll notice it isn't on a boundary but is smack in teh middle of a plate. There is a hot spot there, where magma melts through the crust because that spot is much hotter than other spots, and it frequently erupts (Hawaii has many active volcanoes that have frequent smaller eruptions) and while the crust travels as it subducts and emerges, the hot spot does not move. The arc of the island chains is created by very large eruptions of this spot over time. See also Yellowstone supervolcano. This is the same sort of hot spot which erupts in different spots on the plate as it travels over the magma hot spot. If you look at eruptions over time, it has the same pattern. This phenomenon, at least when I last researched it, isn't well understood, but is very interesting in my opinion. Some of your islands in the middle of the ocean are like this. I think it's fine, considering not much is known about this phenomenon, I don't think it's a problem to have many hot spots.

In regards more to your map vs just info dumping, I'm not an expert on this, just know a bit, but I would say it might make more sense for some of the oceanic boundaries to either be up against the crust, or out in the middle of the ocean (two oceanic plates). Look at Earth's tectonic plates, yes there are some places where a boundary is kind of by a coast but a little bit farther, these are all approaching becoming an oceanic-subducting-under-crust situation. See Japan on a map, this is getting scooted towards China and will eventually just be accreted mountains. If you have a strange space like two oceanic crusts really close to a continent, it might have more of a story. Finally, I think your crescent island would be best created by a landmass ripped apart, and warped a bit over time, trending to be pulled apart generally in every direction.

Not the answer you're looking for? Browse other questions tagged geography map-making tectonics .

8
Tips for Improving a Fictional Map's Coastlines
9
Is an offset mountain range plausible?
5
Rock layers in Procedural Map Creation
6
Advice on accuracy of world map
2
Are my plate tectonics/land masses realistic?
6
Can a fast planetary rotation create a planet with an equatorial continent, preferably with very high mountains and two polar oceans?
3
Any advice on what is a realistic way to use plate tectonics to create landmasses and barriers?
3
How habitable and different would an habitable stagnant-lid (no tectonics) world be?