Ask Question
Asked 2 years, 8 months ago
Modified 2 years, 4 months ago
Viewed 1k times
5
$\begingroup$
This question already has answers here:
What shape of a ship would be most effective in real life space combat? (31 answers)
Closed 2 years ago.

So, for a board game I am developing, I need to design the perfect Space Dreadnought, in the Star Destroyer style. My concept of the end product involves a More Dakka approach, with the combined firepower of many small turbolaser-esque cannons adding up to provide large amounts of usable firepower.

Given the following restrictions, what is the optimum shape for my Space Dreadnought so that it can bring as many cannons to bear on a target as possible?

The objective here is to simultaneously bring all your guns to bear on whatever ship you are targeting while presenting as small a profile as possible when they fire back. Thus, a cone would seem to be the optimal choice - by sloping it, you can overlap the guns so that you can lay down a 'wall of fire', and it allows you to condense the guns so that you can manage to keep your profile as small as possible. The slope of the cone would be (minimum height required for one gun to shoot over the other gun - probably a foot or two at most) / (minimum amount of separation - 5 feet). Maneuvering would be done with boosters build into the side, allowing the ship to easily turn and bracket whatever enemy ship it wants to deal with in it's range. The main thrusters would be in the back, naturally. And, yes, this is a very similar design to the Imperial Star Destroyer, but there's a reason for that - ISDs have a pretty good design, all things considered.

If physics are not a requirement, then Halfthawed's answer (a cone) is the best answer (and I upvoted it). Maybe squish the back end of the cone so it's more oval than circle to bring a few more batteries to bear when the target is broadside rather than in front. When ignoring physics, the only best answer is the one that produces the most surface area during a primary attack.

A quick joke: A farmer wants the most efficient sheep pen possible. It must hold the most sheep for the least amount of fencing. The engineer says it's a rectangle because sheep are rectanglularish and so the most sheep can be put into the pen. The physicist says it's a circle because that maximizes area with the least circumference, minimizing fence cost. The mathematician, on the other hand, steps up, quietly draws a circle around his feet and proudly proclaims, "I declare everything outside this circle to be the pen." Why is the joke important? because this is the kind of answer you get when you ignore practical realities — like physics.

1) Assuming all the batteries must be mounted on the ship, the best solution is a sphere. Indeed, when push comes to shove, the best solution for pretty much all space flight is either a cylinder (see L.Dutch's answer, which I also upvoted) or a sphere. The problem is control, which requires thrusters, and thrusters don't like dealing with angles. That leaves cubes, cylinders, and spheres.

A. First of all, a big, fat dreadnought is the poster-child for "hitting the broad side of a barn." They're great big slow (high mass) targets that are really easy to hit compared to their smaller counterparts. You could add more armor, but now you need more energy to move the darn thing. You could add more defensive weaponry, but again you need more energy. They're big, heavy, slow, and might as well have bullseyes painted on them.

B. And speaking of energy... Whether you're using yesterday's fission reactors, today's fusion reactors, or tomorrow's antimatter reactors... energy weapons demand a TON of energy at the moment they fire. That means lots of power generators and lots of batteries to hold that power — and that means any shot that hits your ship has a FANTASTIC chance of hitting said power generators or batteries... Foofh! no more ship. Most people don't realize that energy weapons mean generating a bazzillion times more energy during combat than at any other time. But holding all those generators/reactors at full operation 100% of the time "just in case" you need power is inefficient (see engineer example above) and dangerous. Batteries are a little better... but have you ever seen what happens when a big capacitor or battery is catastrophically discharged? Batteries are always dangerous. (Foofh!)

Space (in reality) is 100% about efficiency. Yes, the most daring, talented, experienced fleet commander will probably win the day — but only if the efficiencies of the two fleets/ships are about equal. Have you ever seen a small, trained wrestler wrestle a large, untrained dude? The little guy beats him 9 out of 10 times (actually he beats him 10 out of 10 times... but I'm trying to be nice). And to make things worse, if you choose a shape that isn't a sphere, then your dreadnought will always have a weak spot: the tail pipes.

If you want realistic you must be efficient. If you don't need to be efficient, who cares what shape your dreadnought is, because all that's left is aesthetics. Design something that looks cool and move on.

2) This leaves drones. You want those turrets mounted on drones and you want a million of them. The control ship is small and doesn't even need to be directly engaged in combat. Let the drones sit out there generating their little tushies off for all the power they need. Hitting a small drone with a single turret is a LOT harder than hitting your big ol' honking dreadnought and you can swing those buggers around to bring them all to bear in seconds-to-minutes.

This means your command ship is a flying computer with a maintenance bay, lots of antennae, a couple of bunks, and a cafeteria — but it's the most fearsome thing out there because drones don't need to protect human life (i.e., the lives of people onboard the drones—there aren't any). They can fly as fast as possible, be as agile as possible, and generate all the radiation they need to barbecue your enemies!

The shape of your dreadnought is irrelevant because what you really want is a lot of drones.

A quick note: WWII-era battleships are the dreadnoughts of our age, and the reasons I've listed are the reasons none of them are in service anymore....

Your ship is like a piece of paper. On facing the enemy all cannons on that side will have a straight shot.

If you do not want to get hit by space cannonballs you can flip up and present your edge.

If you do get hit on the flat side by a cannonball, it will go right thru your modular system and not do too much damage.

Your cannons extend the width of the hull. A cannon can be retracted and moved out the other side given a little time.

Your cannons are also your thrusters. You adjust the choke and swap in propellant for projectiles. You have to decide which role a given device will play as the switchover takes a little time. 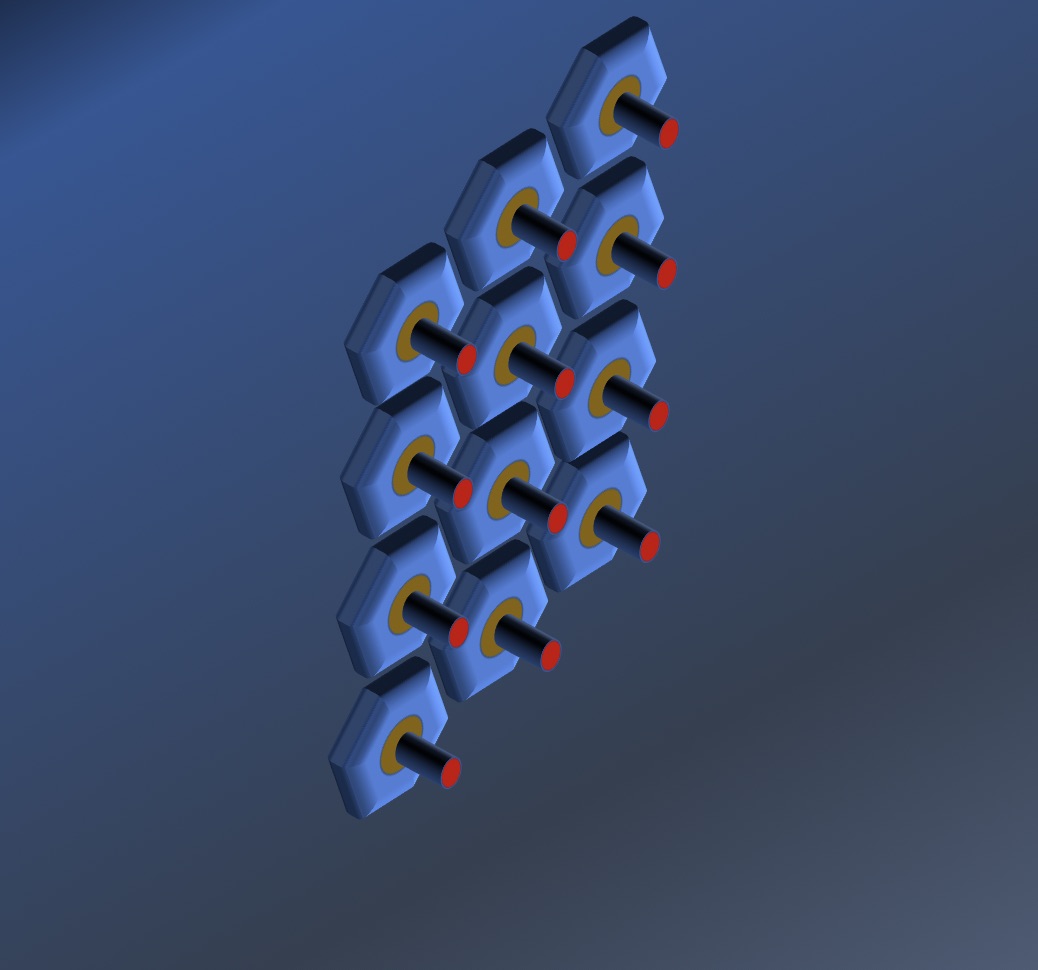 A long and thin cylinder.

On each circular section of the ship, there are 6 cannons placed at the vertex of a regular hexagons.

For any directions you will have at least 3 cannons per section in LoS with the target and you won't have to do any maneuver to point at the target.

On the other hand you can use mirrors to deflect laser attacks, and a similar arrangement will protect you from any direction.

The only weak point would be on the direction of the cylinder axis, where you would have less power of fire.

I'll just add an unonventional design: a long tube-shaped hollowed ship with a framework. On the outside of this framework a bunch of armor layers are present. These layers can move across the framework to present additional armor to most sides of the ship, offering protection for 100% of the outside (including the engines). However the armor will usually slide away to reveal the engines and a hole for the equipment of the ship.

Inside this framework all elements of the ship are present: engines, bridge(s), shield emitters, sensors, power generation, walkways to move through the ship (mostly along the framework itself) etc. Most of these are stuck at their position with armor layers of their own and fill the interior for the most part so there is relatively little wasted space between the outer framework and the interior. The guns, however, are more interesting. The guns can move inbetween the space between the armor layers and the interior layers, using the framework to move. The guns (and additional shield emmiters when necessary) are moved into position, after which the armor sections above it slide away and allow the guns to fire.

The idea is that you can keep this dreadnaught going and modify it to the situation at hand. You want to broadside a single ship? Move all guns to one side, slide the armor away and fire through the opening (current Star Destroyers use a trench design for their guns as well). This reduces the amount of fire that can disable the guns. Or if some pesky rebel fighters are at it again you can reposition the guns to have a more omnidirectional firing angles, with the guns lifted to portrude through the armor as it slides away to give them more time to engage fighters. Damaged or destroyed turrets can be taken back behind the armor for repairs. If a particular area is important, say a single rebel bomber could OHK your ship if they released their bombs there, you can reposition either the turrets from a less valuable portion to provide cover or slide multiple armor plates across that section.

Naturally you have it in your own hands how much freedom the turrets and armor have to move around across and beneath the surface. They might only be able to move a single section further, or they might move anywhere on the ship where you like. Since the Star Wars universe quite needs massive firepower in capitol ship combat its adviseable to allow most guns to get to one side and concentrate their firepower on one section.

As for fluff: you could say that its a weaponized dock, designed to build Star Destroyers and the like but in a pinch they cobbled this together since they lacked the big turbolaser batteries.

52
What shape of a ship would be most effective in real life space combat?
13
What is the optimum shape for a space warship which primarily uses rockets for offensive weaponry?
10
Medieval fantasy ship carrier

4
Space combat for a TBS 4x game game
4
Do lightweight blockade-runner transports make single-seat space fighters obsolete?
13
What is the optimum shape for a space warship which primarily uses rockets for offensive weaponry?
3
Space station design for long-term safety and durability
11
Proper combat distance scaling for a sci-fi space opera tabletop setting
5
What theoretically workable weapons are the best for ship-to-ship combat in space?
9
Is my space combat system realistic?