A light tower based communication system

I'm building a world with cities of extremely different technological capabilities. One has a monopoly on gunpowder and one has complete understanding of the magic system in the world.

The only thing missing is fast communication without the use of radio waves, so I thought a network of light towers using something similar to morse code could be used. I'm asking if this would be feasible and how would I keep this form of communication discrete from enemies.

science-based communication
share | improve this question | |
asked May 24 at 12:27

What you want is a form of heliograph, which is a fairly well-studied and used form of communication. These systems use a mirror to reflect sunlight at the target in flashes, so their maximum range is determined by the size of the mirror. Using large, emplaced mirrors and telescopes between fixed positions, ranges of up to 300km are possible, and your nation could use relay stations or a series of fortresses to spread them further. Portable versions could be used by troops in the field to communicate with their home base.

Heliographs rely on sunlight, and won't work at night or in overcast conditions; similar light signals can be sent via oil lamp but I doubt they have as much range. For vital messages, it would probably be best to have a backup system of messengers in place. (Modern light signals can be sent even in daylight using carbon arc lamps, but that sounds like more sophisticated technology than you're aiming for.)

In terms of hiding signals from the enemy, heliographs are inherently fairly secure because the reflected flashes are only visible in a narrow cone; when transmitting to a fixed location, you can use tubes to narrow the aperture even further. However, those signals can still be read by enemies along the path of the beam. The conventional solution would be to use a codebook that translates words and phrases into numerical codes, which are then kept secret from the enemy.

You can see what that looks like in a diplomatic example with the Zimmerman telegram, which consisted of a long string of numbers broken up into blocks. More common words would receive lower number codes. The diplomatic code contained many thousands of entries to cover every possibility; a military code could be considerably shorter.

The disadvantage of codebooks, of course, is that they can fall into enemy hands. For this reason, it's prudent to keep track of who has them and what happens to them, and have a plan to roll out a new code if your existing one is compromised.

The world has been there, done that, and has the T-shirt.

The word telegraph is derived from the Greek words tele, meaning “distant,” and graphein, meaning “to write.” It came into use toward the end of the 18th century to describe an optical semaphore system developed in France. ... Another widely used visual telegraph was developed in 1795 by George Murray in England. In Murray’s device, characters were sent by opening and closing various combinations of six shutters. This system rapidly caught on in England and in the United States, where a number of sites bearing the name Telegraph Hill or Signal Hill can still be found, particularly in coastal regions. Visual telegraphs were completely replaced by the electric telegraph by the middle of the 19th century.

The trick to keeping it secret is in the code that is used to represent the letters.

The shutter system, in fact, was one of the first digital codes that was developed hundreds of years before the computer. The advantage of shutters is that they were visible both day (black and white shades) and night (light and no light).

The most widely used system was invented in 1792 in France by Claude Chappe, and was popular in the late eighteenth to early nineteenth centuries.[1][2][3] This system is often referred to as semaphore without qualification. Lines of relay towers with a semaphore rig at the top were built within line of sight of each other, at separations of 5–20 miles (8.0–32.2 km). Operators at each tower would watch the neighboring tower through a telescope, and when the semaphore arms began to move spelling out a message, they would pass the message on to the next tower.

Yes this is entirely possible. In fact such systems have been used quite widely in times gone by. For example during the Crimean war the Russians used a series of semaphore signalling stations which allowed information to flow from the front to Moscow and on to St Petersberg in just a few hours. Where as British and French communications took days at the start of the war and didn't improve until towards the middle of the war when the British laid a telegraph cable across the Black sea. Even then there were delays due to vital missing links at odd places like the Danube which meant that the Russian high command was always first to know what was going on.

So such light towers actually work quite well and the signals can be coded if it is necessary to keep the information hidden.

Not a terrible idea. Navies the world over still use signal lamps with indicators flashes in morse code. 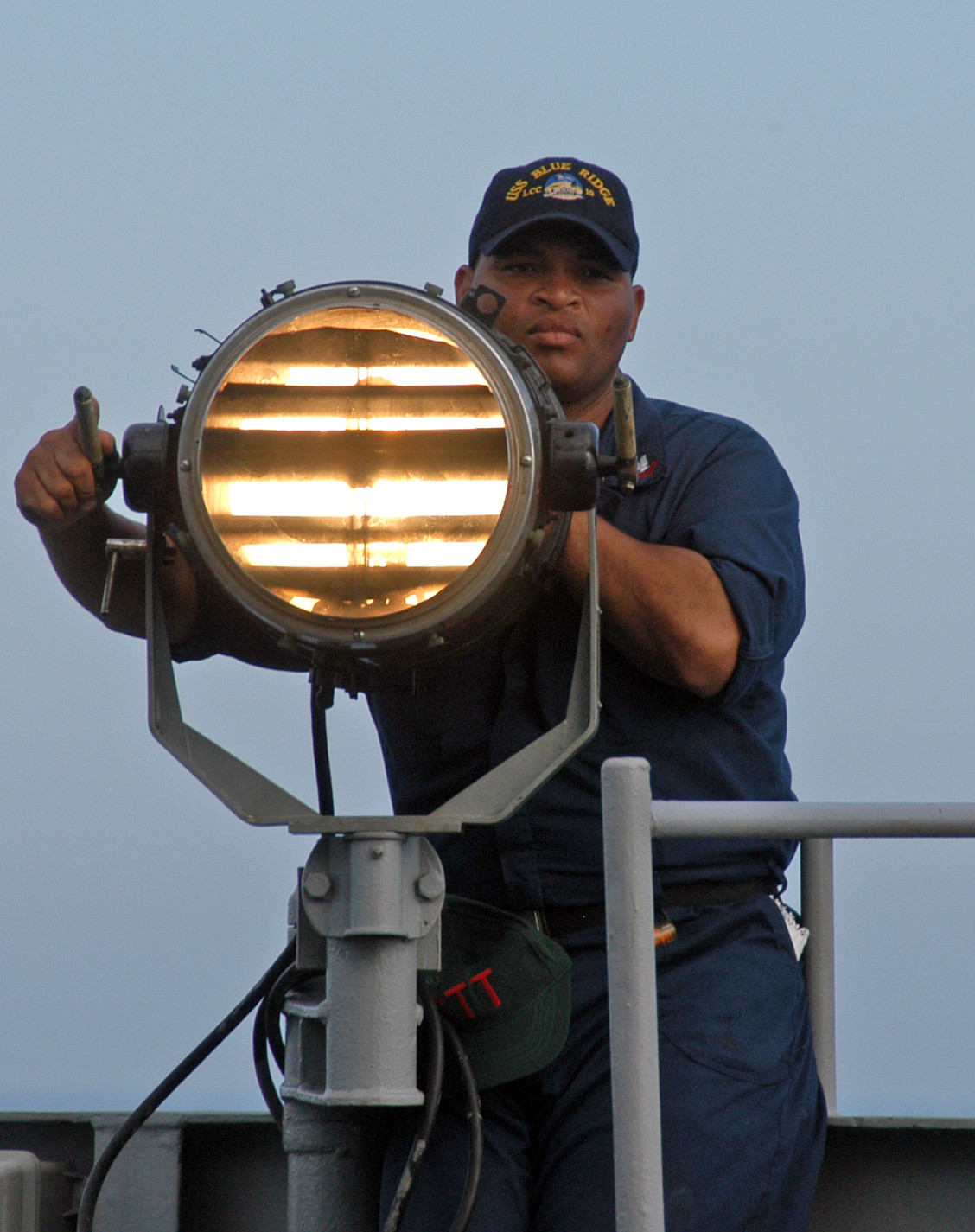 But with line of sight and what the human eye can visually discern from a distance. Based on the curve of the Earth: Standing on a flat surface with your eyes about 5 feet off the ground, the farthest edge that you can see is about 3 miles away. Using the Pythagorean theorem, that calculates to an average curvature of 7.98 inches per mile or approximately 8 inches per mile. For every 200 feet in height your towers would see about 20 miles away.

To help keep the information discrete (in addition to a cryptographic approach which might be broken by enemies), you only want the receiver to see the light you send out instead of broadcasting it, and for that you can utilize:

side-node, light and radio waves are the same thing ;) only at different frequencies.

Not the answer you're looking for? Browse other questions tagged science-based communication or ask your own question.

31
Is there a scientifically plausible faster-than-light communication system?
8
Corrosive oceans and seas - how would this affect our world?
1
Post apocalyptic science based story
2
What sort of cybernetic/genetic enhancements would make sense for cold-blooded soldiers leaving their natural habitat?
7
Mobile phone with tower independent long distance communication features
11
How could an insectoid race communicate with humans?
1
Feasibility of a civil control system on a interstellar society and how to integrate it to society without facing opposition
8
Natural gas based communication
4
Mesas of hard(solid) light
19
Non-visual Computers - thoughts?