Are there any 3000 year old Northern European languages that modern humans could communicate with?

Follow up to Could a well versed archaeologist understand and speak languages that are 3000+ years old?

I have an archaeologist who finds some inscriptions that are at least 3000 years old while excavating some ruins in Northern Europe. It takes him some time, but he manages to track down one of the world's leading specialists in this language to help him with the translations. Due to some handwavy mumbo jumbo, these two scientists manage to awaken a supernatural being that has been in a sort of stasis since the inscriptions were first written.

At a bare minimum, I would need these scientists to be able to read and write in a common dialogue that the supernatural being would understand, but I would prefer them to be able to have a spoken dialogue.

What would be the best language for the supernatural being to know to allow for this?

So basically, that's it: if they are to communicate orally without spending time actually learning each other's language, it would be in Homeric Greek or in Phoenician.

If there are inscriptions to be found and quickly deciphered, they would most likely be in Phoenician.

Note about the idea of some sort of Proto-Basque: While we are certain that the ancestors of the Basques spoke a language which is the ancestor of Basque, we unfortunately don't know anything much about that language. Yes, it must have existed. No, we don't know it. Not that very few people study it; no: we simply have very very little data (basically, a handful or names recorded by the Greeks and the Romans) so that, at present, we don't even pretend to have the foggiest idea about it.

A handful of the languages still survive; in Europe, Basque retains a localised strength, with fewer than a million native speakers...

The Basque language is definitely old enough for your purposes. Whether an ancient speaker would be intelligible at all is a different matter but you can sort it out in the fiction. Once your scholar catches on that some nouns and verbs are Basque, if the god is willing to be patient they can sort out accent and sentence structure with a little work.

There is also lots of fun theories about where Basque came from which range from the scientific to Atlantis-type theories; read a little and pick what you like!

A map showing the shrinkage of the Basque language area during historic times. 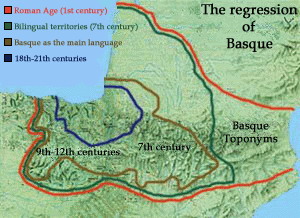 There are two questions that need to be unpacked from what you've written. One -- the language - has been addressed in the linked question. The other is this: what writing system did these archeologists find this 3000-year-old language written in?

There are four known writing systems from 1000 BC we can expect an archeologist to recognize, & perhaps even understand. (Actually five, if we include written Chinese.) They are Egyptian hieroglyphs, Luwian hieroglyphs (used in parts of Anatolia), cuneiform, & the Phoenician alphabet. (The Mycenaean Linear scripts fell out of use by 1000 BC.) I don't know of any examples of the Egyptian or Luwian systems being used beyond their territories, let alone to represent other languages.

While a number of languages have been written using cuneiform, reading cuneiform is a very specialized skill: I took a class in Hittite language years ago, & the instructor simplified matters by omitting teaching cuneiform. (All of our texts were transliterated.) So unless your archeological party happened to have a professor in Semitic languages along, I figure all they could do is say, "Hey, this is written in cuneiform!"

The Phoenician alphabet makes a little more sense: the Phoenicians spread the use of their writing system thru the Mediterranean, & it was later modified to use with Etruscan & Greek. Even an archeologist with only a superficial knowledge of the topic could at least transliterate the inscription, & make a guess at the language it was written in. (IIRC, any competent archeologist working in European topics would know English & one or more of German, French, Italian & Spanish, as well as have some knowledge of Latin &/or ancient Greek. So they could guess from a transcription that it was written in either Proto-Celtic or Proto-Germanic.)

To say more, one would need to do more in-depth research.

So far so good for central and southern Europe!

But your guys are going to be working in northern Europe! At 1000 BC, your best bet is going to be a Uralic language (e.g., such as are spoken in Finland and along the Arctic Ocean coastlands.

It's thought that the Uralic languages got their start in relatively close proximity to the Indo-European family, and some have posited that those two families share a common ancestor.

Sadly for your intrepid duo, there are no records of anything written in any Uralic language before the 1200s. So, if what the archaeologist finds is a sample of actual Uralic, this would be a bonanza for philology! That would be like finding Schleicher's Fable in the flesh for the Indoeuropeanists! Assuming the writing itself can be deciphered & read, it should at least sound familiar to a Uralicist. So, yes, eventually they'd be able to talk to this ancient being.

33
Could a well versed archaeologist understand and speak languages that are 3000+ years old?

48
Is there a reason to believe that programming languages are going to converge?
3
Planning magical language lessons
8
Are there any algorithms that will build fictitious languages?
33
Could a well versed archaeologist understand and speak languages that are 3000+ years old?