Could a human-spider hybrid develop by both human and spider embryogenesis?

The hybrid is a giant spider with a human-like closed circulatory system, calcified bones, a complete muscular system attached only to the bones, growing skin, kidneys, efficient lungs where the tracheae should be, and a womb. They also have a legless human part which sits on top of the prosoma, which has no large intestine, with the small intestine connecting to the foremost portion of the spider intestine. The end of the spinal cord also bends forwards to the spider brain

The development starts with a spider egg that has a chorion. The cumulus extends out of the spider and forms a human inner cell mass there, which develops in the egg like a human embryo, except that the hypoblast stays attached to the spider part, and the mesoderm doesn't spread beyond the umbilical cord or the skin of the spider. The egg implants into the womb and has a placenta like a human embryo. The cloaca does not form, and the yolk stalk becomes an extension of the small intestine and connects to the spider's intestine, with the portion of the gut beyond the yolk stalk forming a structure like the urachus. The neural tube also extends with the yolk sac down into the spider part, and connects to a ganglion, which becomes the spider brain. The outer portion of the yolk stalk decreases as it folds with the intestine, so that the end of the human embryo is on the top of the spider embryo's prosoma. The skeletal systems grow together, and then they continue developing until they are born. At birth, the human part can support itself, and the spider part can do most things that a spider could

Could this embryogenesis work?

No, they are much too different animals for it to work, and even if it did, the two animals' bodies work so differently that it would not survive long at all. The best you can do is modify a human's genome to make it so that parts of its body resemble a spider. 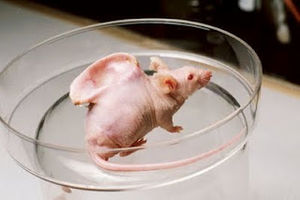 No, but you can make cell implants.

Develop an egg which can hold both a spider and a human and they will probably be able to grow in the same egg. Giving you a person and a spider born from the same egg, twins of different species.

Not the answer you're looking for? Browse other questions tagged fantasy-races centaur spiders .

19
What event could leave an ancient forest so burned it's impassable to humans and cause Centaurs and Humans to work together?
5
Energy vs Biology in an elf-human hybrid
6
How Could a Human beat a Centaur in a Fight?
33
How big would a Daddy Longlegs Spider need to be to kill an average Human?
4
How could a human and a centaur do the do without the human suffering serious injuries?
1
Fantasy Zootopia - Races with both WIngs and Tails
4
Could this centaur anatomy work and fit together?