Could a creature using electromagnetic forces or something to do with ions fly?

This is a small arrow shaped creature that can fly without wings. Can it use electromagnetism to fly? Or maybe something to do with ions? Or however ufos are theorized to work?

I'm not quite sure what technique I'm looking for here. What can I use to make it fly?

science-based creature-design electromagnetism
Share
Improve this question
asked May 22 '20 at 20:57

Magnetic levitation is a topic of interest in physics. Within this noble and holy subject, there is a subtopic called Diamagnetic Levitation:

And diamagnetic things are defined thus:

So if your animal is made of diamagnetic materials, and the planet it lives on has a very intense magnetic field, then they can fly indefinitely.

You are probably wondering now what kinds of materials your animal could have in its organism, that would enable it to fly this way. Water is a good candidate, because:

Do not trust my ramblings just because I am rambling them. Andre Geim and Sir Michael Berry have been given the most coveted award in Science, the Ig Nobel prize, for levitating a frog (and other animals) using a very strong magnetic field. You can see a video of the experiment here. The frog was mostly unharmed, had just a little fright the poor creature.

Now you may be asking yourself, "how does my creature land?" Well, it can either let go a lot of water, or it can make itself denser. Flying is about making the force lifting you as strong as the force pulling you down. By changing shape and letting go of ballast a creature might manage to control its flight.

You are thinking of ionic wind. 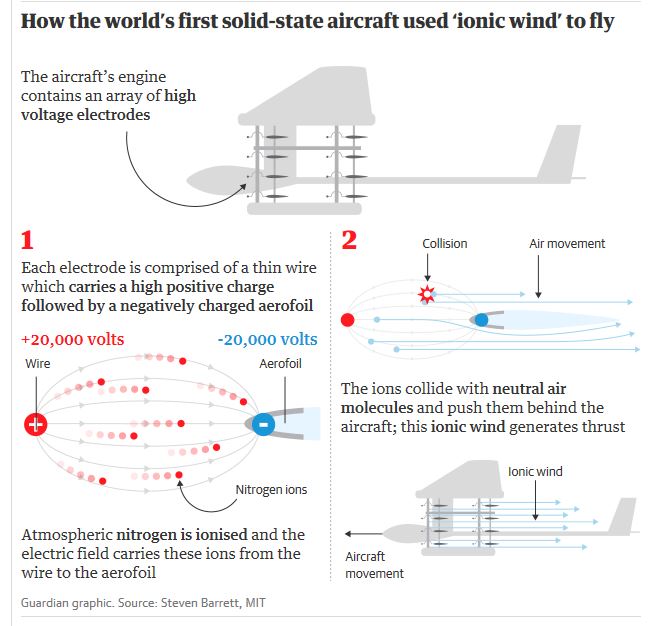 Your critter generates positive ions at the head and recaptures them at the tail. Air entrained by movement of the ions pushes up on wings to give lift.

This is a doable deal for a machine. How exactly a creature is going to ionize air is a trick. It would be easier in the water...

Not the answer you're looking for? Browse other questions tagged science-based creature-design electromagnetism or ask your own question.

6
How do marine dragons evolve flight without any feathers and no hollow bones?

11
Could a creature fly like a helicopter?
19
Could this Very Specific Dragon Fly?
10
What is the deadliest acid a hypothetical biological creature could utilize as a weapon?
1
Creating an exoskeleton/shell for a creature living on an Earth-like planet with specific properties
11
Could a hexapodal bat actually fly?
11
Possible material for dragon wings
10
Keratin wings: would they work?
4
How heavy can a dog-sized creature be with wings about 2-3 times its size?