Realistic Take on a Person with Water Manipulating Powers? [closed]

Someone has the power to manipulate and shape water from almost any source, such as condensing water in the air, with the only exception being other "living things"(for the purposes of this question, "Living things" refer to any sentient creature such as animals or other humans), though, for reasons that are unclear, they can manipulate the water in their own body. This person can change the properties of water near-instantly, such as turning it so cold it becomes ice or making it scalding hot, and if they gather enough water, they can use it to hit their enemies as either bludgeoning attacks or even pseudo-waves. The only other limitations are that it takes physical effort to gather water big enough for wave-like attacks, and the more they use their power, the more exhausted they become.

What would be the required secondary powers this person would need for their power to function as described, and what would be some creative ways they could use their powers that some people wouldn't expect?

Look up "water jet cutting". You can cut steel, glass, rock, all kinds of stuff... with water! This is much more effective with abrasives added to the water (sand, garnets, etc). 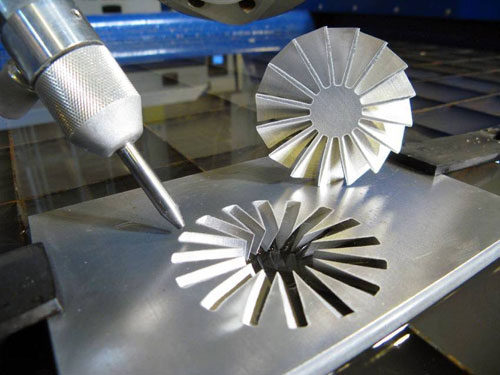 I read a superhero book a few years ago where one of the characters had almost complete control over his body. One of his techniques was basically a blood chainsaw/whip thing with his own blood (rapidly joined by the blood of anyone hit hit with it, but he could easily filter out anything he didn't want in him when he was done).

If they can control the temperature of their own bodily fluids, they basically can't get too hot or too cold. Sunburn, but never heat stroke, never frost bite. They need never sweat (while awake and actively controlling their temp). A sandy water umbrella would be handy. Rip the fluid out of a cactus, mix with sand to reduce transparency, tada!

Depending on just how much effort boiling water costs them, this person might be able to power a steam turbine on their own for a time. Nuclear reactors are just steam turbines with a heat source that isn't a fire.

Just how cold can they make stuff? Dropping the sweat on someone's skin/tears in their eye to absolute zero would cause Serious Harm or Death.

Ice gets harder as it gets colder.

See also "Pykrete". Water (86%) mixed with sawdust (14%) and frozen has twice the crush strength of ice, 4 times the tensile strength of ice (and twice that of concrete), and the sawdust is also an excellent insulator, slowing down melting. The US looked into building a rediculously big aircraft carrier in WWII using pykrete.

Just how hot? "I cast sweat to plasma!"

Alternatively, press a relatively small amount of water (a teaspoon maybe?) against someone, convert it all to steam... But only let the steam escape through a tiny hole in that volume pointed into the person. "Water jet" from above, only with steam.

Alternative to the alternative... whip a chip of ice into someone's chest, and then convert it to steam only now its inside them. Water expands in volume by something like x1600 when converted to steam at 1 atmosphere of pressure.

"it takes physical effort to gather water big enough for wave-like attacks" This I suppose makes a big problem.

So for starters is the ratio 1:1 as in like literary carrying the water yourself or is it completely magical, like your mana decides it, or is something in between where mana + the actual weight of the water matter? Because if the required physical strength to manipulate water is completely realistic then they have to get really creative.

Anyway to the extent I understood the question my answer is

Your person's power can be broadly defined as hydrokinesis, given that its core action is to manipulate water.

Now there are two questions here and I will strive to answer them in order:

Disclaimer: The link is to TV Tropes. Abandon time all ye who click there.

How this manifests is unknown, but perhaps it is blocked by something related to the Kingdom Animalia. It works on the use themselves specifically because it is his own power.

Assuming that freezing water into ice and boiling it into steam is actually altering the temperature of the water, then the user of this ability has to be able to either pull energy from somewhere to raise the temperature, or to pull it out of water to lower it. This leads to what happens to that energy.

This one is possible, but not necessarily required. The ability to withstand the consequences of your own manipulated water -- the scalding steam and the frozen ice. Related to the second part but different, this is the specific ability to be immune to your own doings. This may or may not extend to heat/cold not manipulated by the user.

This secondary power might be the reason they can manipulate their own body -- the user is always subconsciously ensuring that all water that hits them is a specific comfortable temperature.

How to Tame Your Water

So you have some awesome hydrokinetic powers. Awesome! But what can I do with it? Well, the answer is in theory whatever you want. But there are some ideas that can be run with.

Not the answer you're looking for? Browse other questions tagged reality-check super-powers or ask your own question.

19
How would a superhero who needs to fall asleep to use his powers fall asleep during battle?
3
Required Secondary Powers/Realistic Implications for a Person That Can Control Darkness
19
Realistic Take on a Person With Invisibility Powers?
0
Could a Person with “Bug” Controlling Powers Realistically Make Spider-Silk Armor?
4
Realistic Applications of a Person with Wind/Air Powers?
3
Required secondary powers for someone who can manipulate/turn into smoke?
22
What laws, if any, would have to change to allow people with superpowers to use their powers for profit in companies/businesses?
3
Secondary powers required to make an “air scooter” work for a person with wind powers?