I’ve recently been playing a alien game with various alien species. After playing for a bit, I wondered whether or not a 6-inch tall intelligent race could exist.

I can already see some major disadvantages, one being the complications of requiring the necessary energy to power the body, especially the brain, but I can also see some major advantages, such as having the ability to mostly stay out of sight from far larger predators. I’d imagine that if said species were intelligent enough to make small cities and relieve themselves of their natural predators, then it would only be a matter of time for them to colonize their entire planet, and probably even avoid risks of overpopulation and excess mineral usage due to their small stature.

Now to the question:

Could a six inch tall intelligent species ever feasibly evolve, and if so how?

science-based reality-check biology
Share
Improve this question
edited May 21 '20 at 17:39

Six inches is doable, but probably at the very limits of what you can get away with given what we know

Mammals do not have the most optimized brains on Earth. If you start with a brain structure like that of a Macaw and scale it up relative to that of primates, you should be able to arrive at a brain of roughly human intelligence in a package about the size of a ping-pong ball.

Smaller animals are also more structurally sound thanks to the square-cube rule; so, you can get away with a proportionally larger head. The Tarsier takes advantage of this fact to fit proportionally massive eyes in its head; so, a 6" creature of similar proportions could take the same approach to holstering an unexpectedly large brain resulting in an alien that looks... well just like an alien. 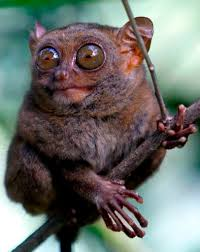 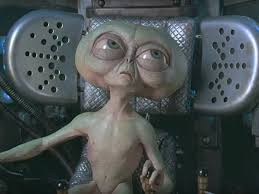 As for how such a creature would evolve, I would probably go with a flightless bird... or rather, an alien that was capable of flight at some point in its evolutionary history. Earth birds evolved these super efficient brains because they had to be able to minimize weight for flight, and we know from Earth that flightless birds have retained this efficiency. You should probably start with an omnivorous flying creature similar to a pigeon or a crow. Larger stronger birds of prey force them to form societies, and build complex fortified "nests". Since a single large nest is more defensible than lots of small ones, this introduces a massive pressure for complex social behaviors and the formation of "tribes". The development of tribes leads to food scarcity which leads them to need to be able to hunt more kinds of prey to meet their nutritional needs. This puts a strong social pressure for tool usage and the development of weapons. Over this whole span of time, importance of flight becomes far less than the importance of the defensible nest; so, their heads get bigger, and their wings start to turn into hands. A few million years latter you have bird like creatures discovering fire, crafting spears and bows, farming, organizing into warbands and doing all the things humans did to set us on our own path.

As a side note, much smaller might even be possible when you look at insects

Insects seem to have even higher density thought than birds when you consider that they can make plans, communicate, stalk prey, build complex structures, and perform basic military tactics all with brains the size of pinheads. But their actions are all instinct, and they can not learn to do things beyond cause and effect; so, it's hard to say how well thier brains actually scale up to being capable of General Intelligence.

It is certainly possible for intelligent beings to be only six inches tall. Of course that depends on how many feet long they are.

It wasn't specified that the aliens have humanoid shape, so I imagine that they look like centipedes:

Arthropleura (Greek for jointed ribs) is a genus of extinct millipede arthropods that lived in what is now northeastern North America and Scotland around 345 to 295 million years ago, from the Viséan stage of the lower Carboniferous Period to the Asselian stage of the lower Permian Period.2 The larger species of the genus are the largest known land invertebrates of all time, and would have had few, if any, predators.

Arthropleura ranged in length from only about 0.3 metres long to A. armata which was 2.5 metres long.3 Arthropleura was able to grow larger than modern arthropods, partly because of the greater partial pressure of oxygen in Earth's atmosphere at that time and because of the lack of large terrestrial vertebrate predators.4

The flattened body of Arthropleura is composed of approximately 30 jointed segments, each of which was covered by two side plates and one center plate. The ratio of pairs of legs to body segments was approximately 8:6, similar to some present-day millipedes.5

A maximum length of 2.5 meters is about 8.201 feet. So Arthropleura probably grew massive enough to support brains large enough for intelligence.

Arthropleura were limited in size by relying on passive diffusion of gas for oxygen and by having exoskeletons. A vertebrate with lungs that had the same body plan could grow much larger than Arthropleura. So intelligent beings six inches tall and several feet long and wide could evolve and exist on Earth.

And on a planet with high enough surface gravity, such a body form might possibly be the only form possible for a species with enough body mass to have a brain large enough for intelligence.

In Hal Clement's novel Mission of Gravity the natives of the planet Mesklin, which has a surface gravity varying between three and seven hundred times the surface gravity of Earth, are shaped like centipedes.

I note that a snake like being six inches in diameter and 100 feet long would have volume of 25 cubic feet, which is close to ten times the volume of an average human which is close to 2.5 cubic feet. A cylindrical being 10 feet long and 0.5 feet or six inches in diameter would have a volume as large as the average human and thus could support a brain as large as a human brain.

In 1864 a specimen washed ashore in the aftermath of a severe storm by St Andrews, Scotland, which was more than 55 m (180 ft) long,6 longer than the longest known Lion's mane jellyfish, the animal which is often considered to be the longest in the world. However, records of extreme length should be taken with caution, because the bodies of nemerteans are flexible and can easily stretch to much more than their usual length.

If the aliens are six inch tall centaurs, they will have much more body mass than six inch tall humanoids, and thus be more likely to have brains large enough for intelligence.

I suppose that the brains of six inch tall humanoids might be spread throughout their bodies and not concentrated solely in their heads, and thus could be significantly larger proportional to their stature. After all, a human brain functions well and has dimensions equal to the dimensions of a six inch tall body.

On Earth the vast majority of mammals have bodies much smaller than humans. But there are hundreds of mammal species about as large as humans or larger, and thus large enough to have brains about human size or large. A minority of those large mammal species, roughly a hundred, do have brains about human size or longer. And many of those species do exhibit intelligent behavior similar in many respects to that of humans, so that the popular idea that there is only one species of intelligent beings or people on Earth is not necessarily correct. There might possibly be between one and a hundred other species of mammals on Earth that should be classified as intelligent beings.

Some species of birds show surprisingly high intelligence for their sizes.

The corvids (ravens, crows, jays, magpies, etc.) and psittacines (parrots, macaws, and cockatoos) are often considered the most intelligent birds, and among the most intelligent animals in general; pigeons, finches, domestic fowl, and birds of prey have also been common subjects of intelligence studies.

This is very interesting, since the entire bodies of such relatively normal sized birds should not weigh much more than the brains of humans and other higher mammals. Thus "bird brains" might be organized for having exceptionally large intelligence for their sizes. Since birds are descended from dinosaurs, it is possible that some undiscovered species of small dinosaurs evolved human level intelligence sometime before the extinction of he dinosaurs 65 million years ago.

A sideways take would be to say the evolution is directed and not natural. In the book "The Age of Em", the author postulates that human consciousness can be emulated on a silicon substrate-a computer brain.

Since the electronic impulses in a computer travel faster than the electrochemical impulses in the brain by a factor of 1,000,000 , the emulated human can think far faster than the origonal "meat" human by up to that ratio. The ratio might not be that extreme for signal processing or other engineering reasons, but the author calculated that a "kilo" Em (i.e. running at a speed 1000X faster than the brain) would actually be comfortable and productive in a body scaled accordingly - only a millimetre tall!

The cost to run an em is proportional to speed probably within at least a factor of one million above and below human speed. Ems can afford to save archive copies at least every 5 subjective minutes. For a faster em, a natural-to-control physical body is proportionally smaller, e.g. a kilo-em has a millimeter tall body, to which gravity seems weaker and winds seem stronger. Ems can meet well in virtual reality when signal delays are less than reaction times; kilo-ems need to be within 15 kilometers. Ems who use fractal adiabatically reversible hardware use much less energy than do human brains for the same speed. They can temporarily vary their speed, and spend about as much renting their hardware as on energy and cooling to run it. Interacting reversible ems coordinate to reverse their interaction messages later within a reversing period".

So outside of natural evolution, technology and directed evolution could make it possible to place emulations in much smaller bodies, robotic or some sort of enhanced cybernetic organism as seems desirable. A six inch tall cyborg does not seem to be beyond the capabilities of any species capable of brain or mind emulation. All it would need is a reasonably acute sensory system to handle the inputs and sufficiently advanced dexterous manipulators (hands, tentacles, beaks and claws etc.) in order to translate thought into action. A body with the means of communication is also necessary.

While various species of octopii and even crows have demonstrated various levels of intelligence, including the ability to communicate, sense their environment, solve problems and manipulate objects here on Earth, they do seem to be somewhat larger than the six inch limit imposed by the OP. While there is reason to suspect these creatures may have the potential to evolve higher intelligence and sapience, it is not clear if changing body size or mass would support this. An engineered being can be built or grown to any arbitrary size, and can have whatever sensory and manipulative organs are desired added during the design and build stage.