How many worlds would you need to mine in order to make a complete Dyson's sphere?

Suppose you were a society with the means to construct a Dyson's sphere (shell), roughly how many earth-sized planets would you need to mine in order to obtain enough minerals to build such a megastructure?

However, it all depends on the thickness of the shell. This is typically given as mass per cubic meter though, because the material density is difficult to know.

We'd probably need more than what we have in our solar system for a one AU Dyson shell. From the wiki article:

To make that actually work though we should assume we have perfect control of fission and fusion to create whatever elements we need to build our sphere. This is called nuclear transmutation, a call back to alchemy. Then all we require is mass, without needing to worry about which elements will work in construction or not.

Why build at one AU? If we build it in our solar system then we're either going to use the Earth in the process or kill the Earth by blocking the Sun. By building it at one AU and setting it spinning, an inside ring (on the plane of rotation) will be habitable and maintain Earth-like gravity. The gravity would reduce to zero moving away from the ring, this would provide a lot of area for advanced manufacturing plants requiring low gravity as well as recreational areas (though the atmosphere would reduce in kind).

If no one is going to live there and you just want to block out the star then significantly less mass would be required. A tightly packed dyson-bubble would approximate a shell and could be constructed using just the mass from a small moon. However, keeping such a fragile structure in place would likely require removing a majority of the rest of the mass in the solar system to keep it from disturbing the shell.

It depends upon the size of Dyson Sphere you are making.

My other answer about Dyson Spheres indicates that spheres with a 10 M shell thickness around white dwarf stars only require materials massing about 1 Earth sized planet's mass.

Such Dyson Spheres have the added benefit of putting the materials under much lower stresses. 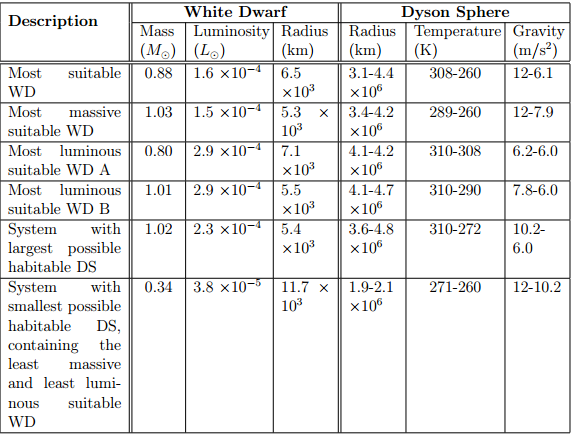 Dyson actually was talking about a shell of independently orbiting solar collectors and habitats, which is dynamically stable and much easier to build. The solar collectors can be quite thin, and habitats can be as large or small as you want (a habitat with a zero g interior can be essentially a small bubble).

Another possibility is to use "Statites" to suspend your habitats from large solar sails at a set distance from the Sun. This would be a gossamer construct which would be far lighter than either a solid shell or a swarm of orbiting objects, and could possibly be built using just an asteroid:

"The practicality of this approach is questionable with modern material science, but cannot yet be ruled out. A statite deployed around the Sun would have to have an overall density of 0.78 grams per square meter of sail.[9] To illustrate the low mass of the required materials, consider that the total mass of a bubble of such material 1 AU in radius would be about 2.17×1020 kg, which is about the same mass as the asteroid Pallas.[10] Another illustration: Regular printing paper has a density of around 80 g/m2."

I like the Dyson bubble using just an asteroid myself.

9
Is A Solar Dyson Sphere Habitable?