What is the Feasibility of a Cloud Colony on Saturn?

I did some research recently for a story on the physical feasibility of some aspects of living in the Saturn cloud deck, and wanted to share it. Please, however, if you have alternate approaches, add them.

Under what conditions would it be possible to live inside the cloud decks of Saturn, assuming money wasn't a problem (within reasonable limits - assuming a solar system economy with settlements on many of the rocky planets, ice moons; this may be being done as some ambitious hext- or heptillionairre's pet project)?

Here are some of the parameters:

hard-science space-colonization
Share
Improve this question
asked May 19, 2020 at 14:05

Where is worth living in this vertical real-estate column? Here is some data on how temperature and pressure vary with altitude, and some interesting landmarks along the way. 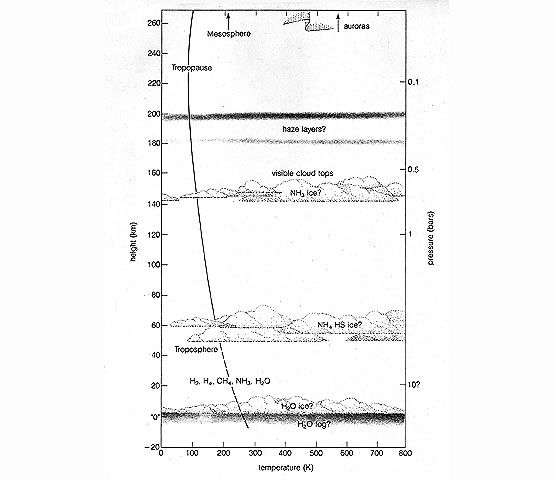 The big problem here is that the atmosphere is hydrogen - the lightest element known to man. There's no possibility of getting a big lifting differential in a methane atmosphere (like Venus) and putting hydrogen in our envelopes.

So, since the lifting power available is so low, is it even possible to have a cloud city?

The lifting power of a balloon is related to the density of the displaced air, and the density of the air filling that gap. We can't use lighter material, so we're constrained to hydrogen gas (0.002 kg per mole) on the outside and hydrogen gas (0.002 kg per mole) on the inside as well. We'll also need to assume a limit on how much the inside gas can be warmed. For this, I'll say the air inside the lifting envelope is 125 degrees Celsius (400 deg K)

We need to figure out the density of these two gasses to determine the lifting power of a heated air envelope.

For hydrogen gas at 5 atmospheres (5 bar) of pressure,

How big an envelope is required to lift a facility of 100 tons mass? It's an envelope of 327,645 cubic meters. That sounds like a lot, but in more comprehensible units, it's a sphere of 94 meters diameter (47 meters radius). That's actually pretty reasonable, I think, for lifting a 100,000 kilogram (100 ton) facility.

Hazard Avoidance The chief reason blimps never became a viable platform on Earth is how easily they are destroyed by foul weather.

Saturn's winds get up to 1,800 kilometers per hour strong. For comparsion, Earth-borne hurricanes top out at 396 km/hr. Flying against the wind is, obviously, not an option. Cloud cities will need to follow the prevailing winds.

High-accuracy, high-precision predictive weather, out to at least 30 days would be essential so that these cloud homesteads could reposition away from problems and also avoid collisions with one-another, and any other atmospheric traffic. And enough lead time that, in the event of an unavoidable calamity, there's time to abandon the structures.

How Feasible is Working in the Ammonia Cloud Deck? 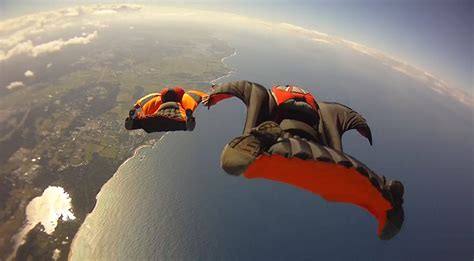 How do humans work when there is no bottom? My thinking is that, assisted or unassisted, a technology like the wing suit is required to get around "on foot" as a supplement to travel in vehicles.

How Feasible is a Wing Suit in the Ammonia Cloud Deck?

Rather than trying to compute all the mechanics, I thought it might be best to imagine a buoyancy assistance device, like the BCDs that divers wear, and imagine how big a BCD would need to be to lift a human in the worst-case situation of stalled or broken wing suit.

This is a balloon equation problem, again. For the sake of the human being wearing this thing, however, I'm lowering the temperature inside the envelope to 25 degrees Celsius (300 K). This is about the standard temperature of Earth's atmosphere.

With that in mind, 491 cubic meters of volume are required for an "emergency bubble up" of the buoyancy compensation device to carry a 100 kg mass human being. This is a sphere almost 11 meters in diameter (or around 40 feet). It's big, but as a safety device doesn't seem unbearable.

What About Getting Out of the Gravity Well?

Saturn seems nice. But, we really want to be able to move people and goods in-and-out.

I think this is where urban centers at 228 Torr (0.3 atmosphere) come into play, being the vertical "central" location for a community living in the more useful 5 bar cloud decks.

Again, some sophisticated software that accurately can predict the weather is essential for these much higher-altitude service-centers to keep their customers inside their service footprint.

A similar 47 meter radius (94 meter diameter) lifting envelope that can carry 100 tons down at the ammonia cloud deck only has about 10 tons of lifting capacity at the haze layer.

This might be fine. These facilities could have bigger footprints, or just manage their weight more aggressively, making sure to get goods off the platform quickly. Or both.

A lifting envelope of only 26 meters diameter is required to load 4 tons of goods for a computer-controlled ascent up to the haze layer for pickup.

A similar system could be used for delivering goods down the gravity well. The computer control system must be pretty good, but I think current technology is up to the challenge.

But Really Getting Out of the Gravity Well

Unfortunately, the haze layer is not orbit. It's not even the top-end region of atmospheric flight. Which makes you wonder. Could we use atmospheric vehicles instead of vertical launch+land heavy lifters?

Feasibility of Atmospheric Orbital Flights from the Haze Layer

Where is the edge of space on Saturn, anyway? 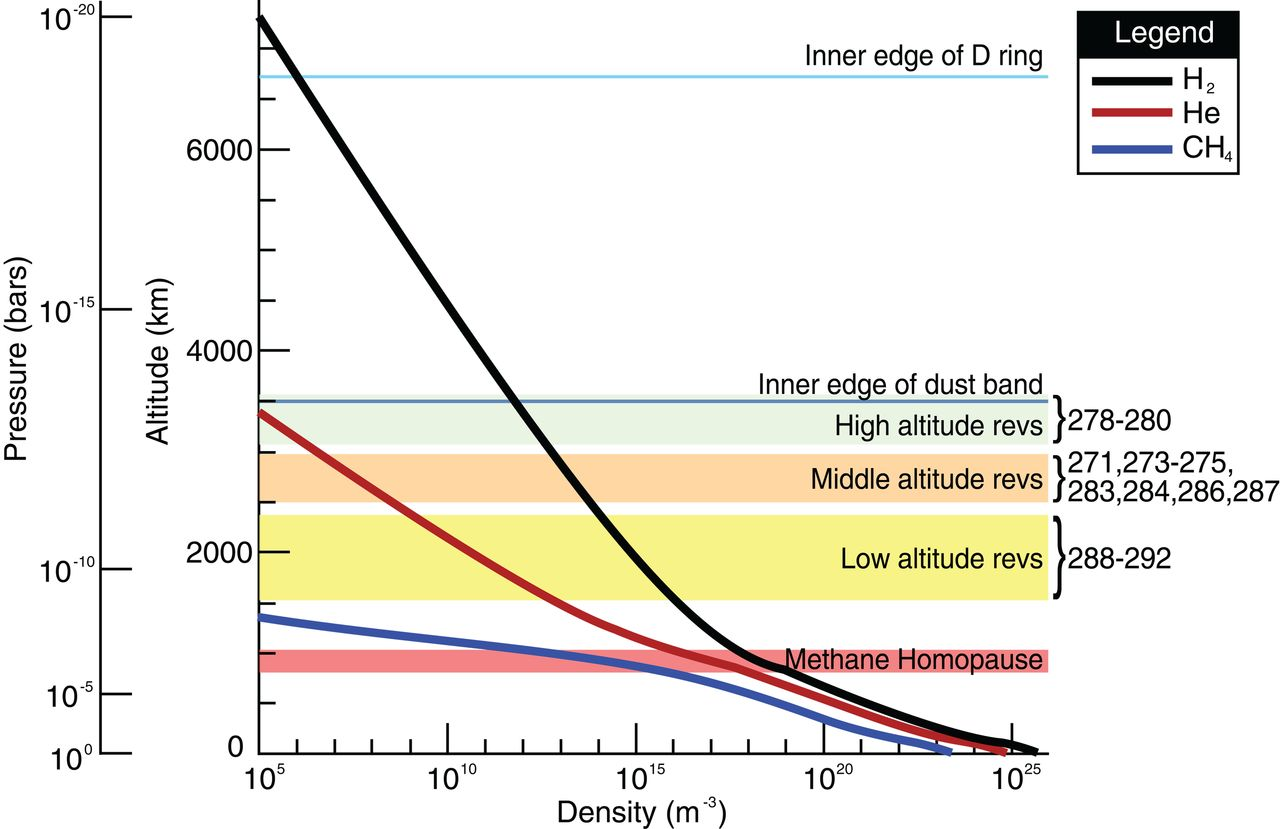 According to Cassini, it looks like once you've hit about 1,000 kilometers altitude from the 1 atmosphere "surface" of Saturn, you've left most of the atmosphere behind you. However, it also looks like conditions aren't so bad for orbit at even half that altitude (500 kilometers).

What's the Feasibility of Atmospheric Flight to 500 Kilometers?

Atmospheric (winged) craft get their lift from speed. This is resisted by the density of the atmosphere. In this thin atmosphere, a jet-rocket can get up to high speeds. This has to be balanced against frictional heating, from going too fast.

Orbital velocity for a close orbit to Saturn is 25,079 meters per second. That's way too fast, and would burn up.

But what if the rocket-jet was able to execute a small entry burn to slow down to some smaller speed before hitting the air? How slow would it have to go to generate lift (because the same low density allowing high speeds is stealing away capacity to lift)? Maybe some near-future fusion engine with a very high specific impulse and decent thrust.

After a LOT of trial-and-error, at about 2,000 meters per second gets a $T2 \over T1$ of 4.81. With the outside air temperature being 100 degrees Kelvin, this would make the vehicle's temperature about 481 degrees Kelvin (206 degrees Celsius), which seems like it could be withstood without too much trouble.

Or maybe, do this another way? How much load can an arbitrary lifting area carry at this altitude? 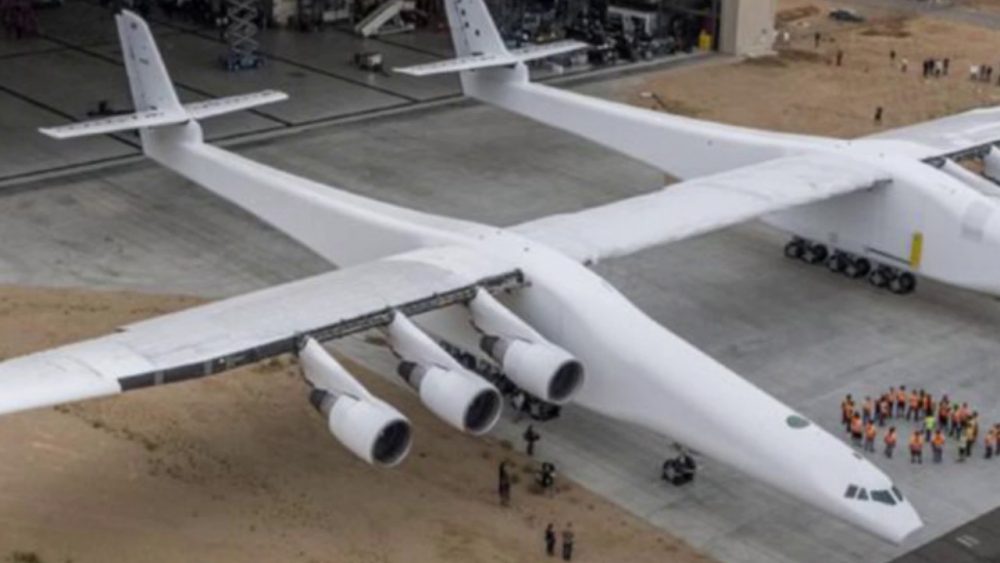 Envisioning a near-future Stratolaunch (the largest wing span aircraft in existence) to be about 4 times the Stratolaunch's impressive 117 meter wingspan and 4 meter average chord length, it's still only possible to carry about 500 kilograms at this altitude, at this speed, in this atmospheric mix. Very disappointing, it probably can't carry it's own weight.

There are a lot of options you could play with, but vertical takeoff and landing heavy launch vehicles are probably how you would get most loads from the haze layer into orbit.

Not the answer you're looking for? Browse other questions tagged hard-science space-colonization .

4
What would a carbon-based organism encounter deep in Saturn?

8
On feasibility of rotating space colonies
45
Can Cloud Nine be built?
26
What is the feasibility of a floating city on Venus?
0
Ideal Martian Colony Spot
6
How should the human respiratory system be changed to be able, in addition to oxygen, to breathe chlorine or hydrogen sulfide?