What would life around a hydrothermal vent on Europa be like?

Hydrothermal vents are thought to exist on Europa. On Earth, these vents are surrounded by all manner of freakish and bizarre looking creatures, mainly various worms, crabs and octopodes.

Europa's ocean(s) are much deeper than on Earth, I imagine that pressure might become an issue. Also, Vulcanoctopus Hydrothermalis (below) appears to have vestigial eyes. Europan life form's would also have never been exposed to light, would they evolve eyes? Perhaps eyes that see in a different part of the light spectum (eg: infrared?). What about bioluminescence? 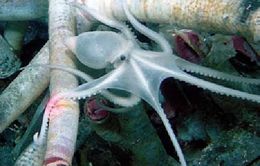 Assuming that would also evolve to live around Europa's vents, would it be similar to terrestrial vent life? Would most creatures have eyes and/or bioluminescence, or would feelers be more practical?

My own suspicion is that they would evolve many feelers and mostly be very slow in order to stretch out what little sustinence they can catch. Jelly-fish creatures might also be possible. Any other sugestions for adaptations are welcome.

Most of the Europan life forms would be analogues of bacteria which generate their energy from chemical reactions based on minerals that are heated and circulated through the hydrothermal vent. After that, a series of feeders who consume the bacterial creatures and extract energy and complex molecules from the bacteria should be assumed to exist, with most of the differentiation being based on how close they are to the vent and the density of the bacteria they can feed on (close to the vent will be very hot, but have a high concentration of bacteria, while farther away the temperatures will be more moderate, but the density of the bacteria will also be lower).

Depending on how energy intensive this sort of life is and the length of time thermal vents remain active, there is a possibility of more active "animal" life which feeds on the bacteria eaters, as well as a subset of ecological creatures which consume dead and decaying creatures as well. I would suspect that most of the life would be fixed in place by roots or anchors of some sort, to prevent it from being cast into the cold and lightless ocean, so we would see the analogues of corals, barnacles, sea anemones and so on, Predatory creatures might resemble millipedes, capable of hanging on in high currents and having some sort of proboscis to fish out corals and barnacles from their shelters.

While no creature would probably develop eyes, they may have some sort of sense linked to Jupiter's powerful magnetic field, as well as sensitive feelers to track the vibrations of their prey, possible earthquakes and the flow of current. I would picture creatures covered in fringes of antenna like sensors which can serve these functions, rather than smooth surfaces like we are accustomed to seeing. A creature which resembles a whiffle ball also has lots of tendrils to grab and feed on bacteria in the current, or possibly entangle larger prey. Giant creatures such as the one depicted in Arthur C Clarke's book 2010 are not very likely, since the available energy sources would be too small to support them.

I am not clear what the effects of the greater pressure would be, but unless the static column of water is so great that water changes into another form (like one of the 17 different forms of ice) and can no longer serve as a solvent and medium for chemical reactions necessary for life to occur, then I think that life may be possible on Europa.

-always dark==>no eyes, and no bioluminescence as this was developed to attract creatures with eyes. However like deep sea shrimp they might have 'light sensor' on their backs, which can do little more than tell the creatures if there's a light source nearby. (Although their environment is pitch-black to human eyes, the hot vents emit an infrared glow.)

A source of nutrition-chemosynthesis or living off chemosynthesising organisms cf At their deep-sea homestead, the shrimp feed on gardens of bacteria they cultivate on their own bodies, a strategy also used by yeti crabs recently discovered at hydrothermal vents in the Antarctic.Then predators could live off these in turn.

-a way of moving-if strong currents exist a good description above of how they would need some (of the many possible) ways to hang onto the vent (claws, hooks, suckers etc)

-a way of sensing-most likely using vibration sense? or sound? (though I've no idea what happens to sound at huge depths and pressures). Likely is simple blind crawling around and feeling out for prey using touch organs. Also likely is simple slow-metabolism creatures lying in wait for someone to bump into them then ambush and snag and eat the unfortunate creature.

-also possible is upside-down creatures-as recently discovered in arctic-here underside of ice sheet-the 'roof' of their world is (as they swim 'upside down') now their 'ground'. Note 'upside down' is only our perspective, they are optimally orientated to their environment.

-ignore terms such as very cold and very high pressure-these terms mean nothing to a creature that has evolved in such an environment-for them this is perfectly normal.

-Equally when people say very cold=slow metabolism this is true of earth creatures, it may not be true of alien creatures. Earth has such 'weird' life-cycles just here that we can't begin to imagine how weird it will be elsewhere. Look at flabby whalefish and anglerfish for example.

-when people say only enough oxygen for small amount of creatures to live a) this is just an (educated) guess and b) life will thus live off something else, that seems to be the pattern here on Earth, complexity emerges out of whatever is there, under the right circumstances (which Europa seems to have).

-likewise I don't see any reason why they couldn't float/swim etc in this giant ocean, maybe simple organism with incredibly slow metabolism or even on the cusp of dead/alive (think Resurrection plant).

-if large sea creatures existed, 'swimmingly' freely they would probably do so in a manner similar to our sea creatures-from simple drifting to guided activities using all the various methods of aquatic locomotion (see wikipedia) that have evolved here on Earth.

-if larger sea cretures existed as hunters they would very likely use a guided sensing method of hunting eg smell, vibration sense or even echolocation. Use of long (maybe very, very long) 'tendrils' that could act as a aquatic spider web also possible (why not?!)

-maybe no communicative color or markings-no eyes-no color needed, color on Earth has signalling function but there any color would be entirely random. Note how creatures around deep-sea vents (from what I know) are often color-free (white it seems) and have no markings.

-Other ideas, edited from Wikiepdia-'deep sea fish'... ...are sedentary, adapted to outputting minimum energy in a habitat with very little food or available energy.... Their bodies are elongated with weak, watery muscles and skeletal structures. Since so much of the fish is water, they are not compressed by the great pressures at these depths. They often have extensible, hinged jaws with recurved teeth. They are slimy, without scales. The central nervous system is confined to the lateral line and olfactory systems, the eyes are small and may not function, and gills, kidneys and hearts, and swimbladders are small or missing.

The swimbladders of deep sea fish are either absent or scarcely operational.

Because food is so scarce, bathypelagic predators are not selective in their feeding habits, but grab whatever comes close enough.

It is not easy finding a mate in this zone....(some) are hermaphrodites, which doubles their chances of producing both eggs and sperm when an encounter occurs.

Many forms other than fish live in the bathypelagic zone, such as squid, large whales, octopuses, sponges, brachiopods, sea stars, and echinoids, but this zone is difficult for fish to live in.

I think the most important thing to remember is that most freakish life around thermal vents is an adaptation of already-existing life. Also, given Europa's distance from the sun and the depth of its vents in its (assumed) ocean, life would likely be either able to see and bioluminescent or sensitive in ways that don't require light. That said, it's your world, you can make your creatures however you wish.

Maybe there's bioluminescent plantlike life that makes it light as day around the vents. Maybe there are lifeforms that use echolocation or even psychic senses to see. Realism flies out the door; alien life may have support systems that allow them to expand despite the square/cube law. They may have systems that are completely unseen in our planet. They may be fourth dimensional. 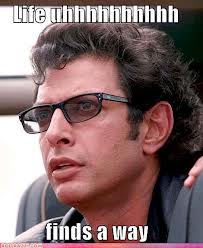 I'm also making a Europa analogue, and my thinking was that if there's never been light for these creatures to evolve with, there'd be no reason for them to have eyes, so there'd be no reason to evolve bioluminescence. I thought about having them see infrared, but to me letting them have eyes to see infrared, when they can already feel the heat given off from an object or other creature, would be redundant. Also bioluminescence in the infrared spectrum would probably damage the creature creating the light, as it would need to be hot to produce that. It's hard to bring up evidence from Earth life to back any of that up, though, because all life on this planet had, at one point, access to sunlight.

Not the answer you're looking for? Browse other questions tagged biology creature-design environment or ask your own question.

12
How big can Europan fish get?
2
Would an aquatic civilisation be able to exist under Europa's ice sheet?
-1
Could life be living in Europa?