Sky of Earth and Seas of Sky

I have a medieval fantasy setting where people live in a vast expanse of giant caves. The lowest level of these caves have many lakes and oceans. Through any of these bodies of water at the bottom level you can see the sun, moon, and stars, and the water has a day night cycle. The sun shines through bright enough to support a forest of plant life on the ceiling of the cave. Gravity is about 1G and points down toward the seas.

Magic exists, but I'd prefer as many aspects of this to adhere to real laws of nature as possible.

The water is real water. You can drink it, you can swim in it, etc.

The atmosphere is breathable by humans.

Is there a natural process that could create this sort of affect under the water? 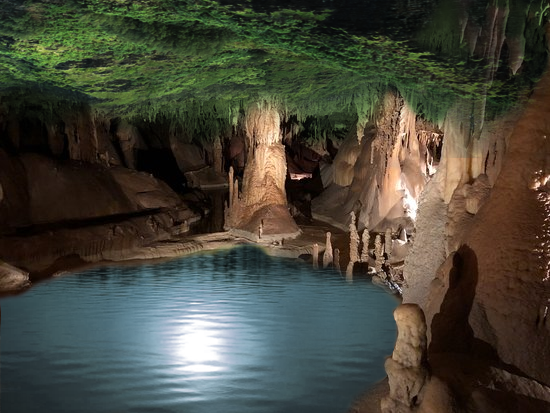 Since you specify they see the sun and stars what they see must be the real space thru a window.

There are many variants but the simplest would be an O'Neill cylinder modified to only have a single cylinder with axis of rotation perpendicular to the plane of the orbit. You can do this because the light does not come thru the center as in the usual variant so you just have a normal day-night cycle thru the transparent walls of the cylinder and you do not need to turn the cylinder towards the sun.

The water on the floor would then be useful as a radiation protection. Specifically sunlight in space is unfiltered by atmosphere and is much stronger and richer in UV than is safe for life. Channelling it thru a layer of water would cut down the light level to tolerable and remove the UV and other ionizing radiation. Additionally this would cause strong convection effect on the water which would reduce the chance of nutrients "falling to the bottom". And the UV would kill algae so it cannot gunk the windows. And by covering and uncovering the windows you can control the light and temperature in a simple manner. Mirrors or insulation would allow keeping habitats warm for their orbit.

All in all making the walls transparent and covered in water is surprisingly good solution to common issues with habitats.

The ceiling above would be a solution to another common issue. How to retain atmosphere. A ceiling that simply traps the air has certain brutal aesthetic to it. You'd want some sort of self-repair though. While this would require more material than a simple cylinder, the extra material of the "ceilings" would double as a source of minerals for the native life. So it might not actually be extra.

And the center of cylinder would be free for whatever you want. Automated maintenance systems. A city of Gods. A hyperdrive. A space port with an entire fleet of ships docked. Huge stores of various volatiles. Automated systems for replenishing those volatiles from asteroids. Whatever.

That is, make it a large planetoid that has a rapid spin. The spin is great enough to force everyone towards the outside. The oceans would be on the surface, and here comes the handwaving. The gravity of the planet is strong enough to keep the water on the surface from being flung off by the centripetal force. Not sure if that is at all possible, but it is a good plot device. Maybe the 'water' has a very high surface tension that keeps the 'water' wrapped around the planet. The water is 'sticky' enough to adhere to the planet surface.

When they got to the 'bottom' (the top layer) of the cave, there would be openings in the crust layer, so they would be looking at the bottom of the ocean. Again, here is where handwaving comes in. The centripetal force would keep the water from 'falling' into the cave, being 'flung out', and the surface tension/stickiness would cause it to film over the hole. If you jumped in the water, you could swim to the 'bottom' which would actually be the surface, and you risk being cast into space by the centripetal force. The opposite of 'diving into' the water, you would be 'diving out' of the water. At this point, how far up you go depends on the actual gravity and escape velocity of the planet. That is, you are flung out by the spinning, and then brought back by gravity.

Everything would be a handwaved balance of forces between 'normal planetary mass gravity' and the 'centripetal force artificial gravity' of the planet spinning, adjusted as the plot demanded.

A certain suspension of disbelief would be necessary, but that is what fantasy is all about. Magic if necessary but not necessarily magic.

The night-day cycle could be altered from the planet spin by pointing the axis of spin towards the sun, and the 'night/day'dictated by the revolving of the planet around the sun in some weird planetary orbital configuration. That is, at the equator, the stars would be zooming across the water but the sunshine would maintain a constant brightness, at the poles they would see either space or the sun as the planet circled around the sun.

It would be fantasy weirdness par excellance.

The Naboo Abyss was a series of submerged, cavernous tunnels that ran throughout the planet Naboo, reaching the surface and passing through the world's core. A variety of creatures lived throughout the tunnels including the opee sea killer, colo claw fish, yobshrimp and sando aqua monster.[1] The Jedi Master Qui-Gon Jinn, his padawan Obi-Wan Kenobi and the Gungan Jar Jar Binks traveled through the Abyss in a Gungan bongo submarine when attempting to reach the city of Theed from the aquatic city of Otoh Gunga.[2]

I was interested on recently rewatching the Phantom Menace to consider how gravity on the top of Naboo was compatible with the planet having a (monster infested) liquid core traversable via submarine. But that is how it is!

And so too on your planet. On descending to the lowest level and encountering the water, you are actually encountering the bottom of the lakes on the opposite side of the planet. By the time you encounter them you are already past the planet center and on the way out the far side, because the lakes are not that deep - light can penetrate to the bottom. Were you to swim up through these lakes you would emerge on the surface of the planet on the opposite side from which you started, having gone entirely through it.

Gravity might get a little wonky deep in these tunnels at the planet's core.

The waters are filled with bioluminescent lifeforms, microscopic to the eye and blooming a couple meters below the surface. This ecosystem follows a 24 hours cycle in which some very bright species of plankton gather around a shore, then spend 12 moving to the other shore (this is the "sun"). After that other species of bioluminescent plankton gather in more sparse spheres (these are the "stars"). A separate set of species may form the "Moon". You can have a different set of "sun", "moon" and "stars" in every major water body.

The stars may be fixed if the plankton that are responsible for it are fixed to the bottom of the lakes.

Magic can make it so that light is able to penetrate deeper into the water of your world. This way the bioluminescent plankton may be way deeper than just a couple meters. This would give off a better illusion of sun, moon and stars.

Not the answer you're looking for? Browse other questions tagged alternate-worlds or ask your own question.

5
Water & Nutrient Cycle of an upside down forest

11
What effect would a red sky and/or sun have on plants and animals?
24
How can I brighten the night sky (just a bit)?
2
Aircraft and Rockets on a Magical Super-Earth
2
Flat world and water
1
How would Water and wind current work on a fantasy earth?
8
What stars and composition of gases should my planets have to have a sky for each colour in the rainbow?
7
What levels of Argon and Neon (along with other factors) are needed to make the entire sky orange and sustainable for life?
16
Could a world with a extremely bright night sky exist?