Which map below would make more sense for a post-apocalyptic federal government to control if it wanted to liberate the country?

So I’m currently stuck between the peninsula-map and this one .

Between the two, which would make more sense for the federal government to have control over 17 years after zombies and a virus both wiped out 82% of mankind? What map would be more realistic if the government wanted to retake and liberate the entire country?

Also, because I know people are gonna bring it up:

I live in Washington DC and I can speak to the local geography. The biggest difference between the two maps is whether or not you include the waterfront of Saint Mary's county. As @Kepotx points out, there is a tactical advantage to waterfront real estate. The end of the peninsula is a state park called Lookout Point, which was a military base created for the War of 1812. As the name suggests, it's a great place to watch for enemy movements. Someone swimming with the ability of a 7 year old should be easy to detect. Even more important is the fact the peninsula contains Naval Air Station Patuxent River (pictured below). Both maps contain Joint Base Anacostia–Bolling and other military resources, but you'd be well served by having another airbase from which to launch operations. 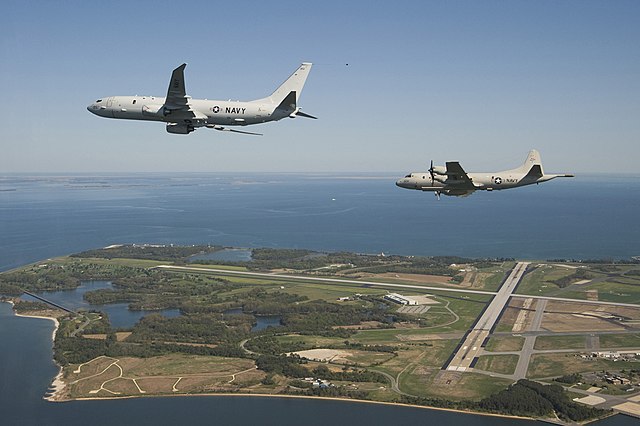 Food is another reason to expand your waterfront. There's a long history of seafood in the Chesapeake Bay. DC has two beautiful rivers but you don't necessarily want to fish them.

Is there a reason that the peninsula map has that extra bit of land on the west near Martinsburg? It makes sense to have the border near the mountains/I-66 since mountains give you a terrain advantage.

In reality, the US federal has long made plans to abandon Washington DC in the case of a nuclear war or other cataclysm. The Raven Rock compound has played into many of these plans. There's even a book about it with the subtle title Raven Rock: The Story of the U.S. Government's Secret Plan to Save Itself – While the Rest of Us Die.

Assuming zombies can't swim, ocean is a very good border. Even against other humans, number of people coming from seas is limited by logistics, much more than in land, and it will be easier to see. You have more land, without the struggle to defend a border.

It's not only good for defense, but it is also a good source of food, river + sea will give you lot of fish.

Again, water is safe. May you trade with other cities, you would probably try to have a secure trade route, and as sea is safe, sea route may be a good thing to have.

Given those advantages, I think conquering land in the south-east until reaching the coast would be a good priority.

If we are making the assumption that the Federal Government has survived and actually has communications and can exert control over Federal institutions across the country, then we have both a plausible starting point for a story, and an answer to your map issue: a map of the Continental United States plus overseas territories and possessions. This would include marking all surviving things like the Diego Garcia base in the Pacific Ocean to National Parks scattered across the nation. Without the ability to command the manpower and resources across the United States, any claim to be the Federal Government is a fiction - the "President" is effectively the warlord of Washington DC (regardless of which map you are using).

Indeed, other warlords who have access to better resource bases may be far more able to establish effective claims to the territories of the United States, although how much they would choose to claim and how much they would actually control is probably more a measure of their resource base, ambition and common sense. The warlord of the nearby Shenandoah Valley would have access to fairly rich agricultural lands, nearby coal deposits and a reasonably defensible perimeter against foot armies and groups with limited mechanization or numbers. His opinion of the "President" might simply be to blow off Washington's edicts, unless they have the power to actually enforce them.

And this is the real crux of the matter. Nations can fall apart without a "zombie apocalypse" if the government no longer has the power to enforce its laws, collect taxes or control its territory. The dismemberment of China in the 1800's or indeed a lot of the history of Colonialism is simply stronger and better organized forces sweeping aside weak local rulers and displacing or coopting the pre existing structures and institutions. The collapse of the USSR was similarly due to the Communist party apparatus no longer being able to enforce their edicts, or even muster enough popular support to remain in power - the USSR essentially evaporated.

If the President can still call on the Marines in 29 Palms or Pendelton, then any would be "Warlord of Los Angeles" is going to have a difficult time asserting their independence or claims to LA, the rest of California or the United States. Similarly, people moving in from Canada or Mexico are not going to be able to assert claims to "Alta Mexico" or the Oregon Territories if there is still an effective US military force willing and able to defend the borders (while local warlords might do this as well, it is for the protection of their territories, not that of the Sovereign United States).

So the actual issue with the Washington map is it only one of the multitude of places that still remain true to their oaths to defend the Constitution from "All Enemies Foreign and Domestic", and with the resources to make it stick. The larger area makes sense from the perspective that there is more farmland available to support the population, and any potential invaders will have to fight through fortified farms, local strong points and barricades if they are determined to take Washington by land (the British, of course, simply Sailed up Chesapeake Bay and the Potomac River during the War of 1812 to burn Washington), but without the control of the resources of the pre apocalyptic United States, it will only be one of a multitude of micro nations, and not even the strongest (What happens when the Warlord of Richmond decides to finish the Civil War on his terms?).

Okay, so, first problem with both maps is that the Raven Rock Mountain Complex is not included in either. Being the US government's hiding hole in the advent of exactly the kind of apocalypse that is described, it would probably be the effective administrative capitol even if Washington DC was reclaimed and reinhabited. I buy that DC would be used as a symbolic capital for legitimacy's sake, but in a world where zombies are still a threat, and especially one where that threat seems to be increasing again, whatever was left in DC would probably get packed up and lugged back to Raven Rock, just in case.

With that out of the way-

What people are missing is the idea of a 'buffer.' If the surviving government, rather than annexing right up to the waterfront, set up a de-facto military government for the regions around DC in order to catch and pick apart the kinds of hordes that practically took down civilization, they'd be significantly more secure in their control of the District of Colombia itself. Of course, the welcome side effect is that in this period of massive instability, the capital would be significantly better protected if a popular uprising or rebellious state decided to move on them. As for farmland, I find it realistic for the soldiers to grow crops, given it has happened historically and being exposed in an open field is now a much more dangerous thing without a weapon and training.

It's defiantly a neo-feudal thing, which might not be what you're going for, but without the kind of manpower, established economic force, and broad-scale public safety against what are effectively wildlife attacks, a decentralized defense-in-depth makes a lot more sense than sending out the airplanes and tanks as a single unified army to annihilate the threats one at a time.

With zombies in particular, small, local and largely self-sufficient fortified garrisons protecting an urban center with the kind of immigration pull a resecured DC would have makes even more sense. Even when Americans in DC lacked voting rights, it still attracted a massive urban population, as any capital tends to.

With few exceptions, they will be fighting smaller, more numerous hordes, only coming together when the government detects a particularly large horde. When that happens, small and manned fortifications would be able to keep the horde distracted until help arrived, given how most zombies tend to only target a single thing at a time. This can result in some great moments, if zombies appear that are significantly more tactically-minded, leading a horde straight past the bunkers to the city of DC. The military would have probably gotten quite used to the strategy, and response times would have gotten slow after 19 years of learning how the things worked.

Not the answer you're looking for? Browse other questions tagged society science-fiction warfare economy government .

7
Would geographical borders exist in a near-future world ruled by corporations instead of nation-states?
9
How would a drug cartel claim legitimacy as a government entity?
14
Moving the US capital to the Midwest before 1900?
4
How big should my particular military be under post-apocalyptic conditions?
2
Would my version of a post-apocalyptic US federal government make sense and/or function properly?
6
How practical are walls and other tall fixed fortifications when it comes to the defense of a city in a post-apocalyptic setting?
4
What should I consider when making walls or fortifications that can stand against zombies, bandits, and enemy militaries?
4
Would this presidential directive be practical to implement?
4
How practical would it be to have VTOL aircraft be part of a military in a post-apocalyptic dystopian setting?
5
Does my military make much sense?