How Do I Develop a Society of Geniuses?

Goal: Achieve a society where the average person is a creative and/or analytical and/or strategic genius and/or physically phenomenal (as measured by our current standards, of course).

Notes: I don't think an answer of the type "Just genetically engineer everybody, duh" will satisfy my answer acceptance condition. How would you know what mutations to induce? Can genius be genetically coded, even? Same for "Make the schools better", since the US spends (by world standards) a fortune on its pupils and has mediocre outcomes.

Some physiological aspects of humans are controlled by one or few genes (say eye color). Other aspects (like height) might be controlled by 100s or 1000s of genes.

Some scientists think that human intelligence may be controlled by 10,000 genes. Each of them contributing a small amount to a person's over all intelligence. We have not yet identified all of these genes and what side effects the "smart" version of the gene might induce.

The steps required to perform this engineering are:

Without unsavory testing on human subjects, this is going to take quite a long time.

The "real life" example of this is the Ashkenazi Jewish population, where a small population was self selected for intelligence. Historically, Jews were often restricted to what jobs they could hold, so the few positions open to them like accounting and trade generally depended on having and using intelligence. More successful bankers, traders and accountants would have more children, building the cycle. Since the Jewish population was also generally insular for both religious and social reasons, outbreeding was not encouraged.

As a result, the Ashkenazi Jewish population is generally both "smarter" than the median intelligence level, but also more prone to various inheritable genetic disorders. The population of Ashkenazi Jews is above the median, but I suspect that this is neither far enough or large enough to be the "society of Genii" that you are looking for.

This sort of program takes centuries to implement, and the inbreeding also results in many problems. While it is possible (if not ethical) to do something similar today, I doubt we have the required knowledge to ensure that we actually achieve the genius population desired, and at the same time, avoid the problems of inbreeding. The possible out would be to run multiple programs, and occasionally outbreed between the various gene pools. Of course the risk there is that you end up diluting the desired genetic enhancements at the same time you reduce the risks of genetic disorders.

I think the answer here is selective reproduction...combined with a whole bunch of other things. Technologically you could introduce gene modification but with modern technology that is still pretty dicey as far as knowing what in the hell we are doing.

Selective reproduction is a tried and true method to promote certain traits and/or behaviors. That being said, humans can be obstinate when comes to silly things like self-determination and making babies. Ingrates the lot of them.

A lot of different things will need to happen for this program to be accepted by the general population...people like to have sex after all...I am sure that comes as a great surprise.

I can think of two reasonable scenarios...

I won't bother going into the moral implications of dictating compliance

Nature and Nurture. Never forget the importance of nurture, creating your ubermen is one thing...but they need to be educated...I think of the scene of spock as a child on vulcan in the more recent Trek movie.

Don't forget about creativity and introducing new ideas. Group think is bad, and intelligence without creativity is more limited in its possibilities than the alternative.

In the end...you get Nietzsche fighting Superman while holding an eagle and a snake...if you don't get why Nietzsche is relevant, click here 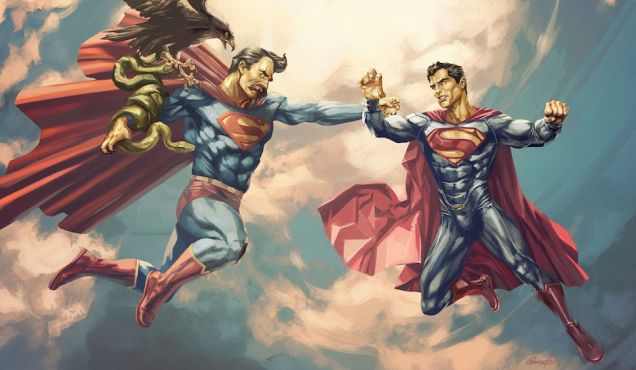 Which is so awesome I don't even have the words to describe it...

I think a good first step if you want geniuses would be to build a system for finding, recognizing, and using genius. Currently the system is based on the people themselves having the motivation to develop and use their abilities. This works just fine for normal intelligent people, who are what the economy is built for, but not so much for actual genius. A smart person will figure out an ingenious way to make lots of money. To a genius it will be obvious he can get the same end result by wasting less of the money he already gets. Sure you could use those millions to do something fun, but it is much faster to spend the time making those millions would take to do something fun and free.

Fundamentally incentive systems are built to affect the way people think and a genius thinks different just enough that the incentive systems are less effective than they are for merely very smart people who for most jobs perform just as well. Very few jobs are built to require a genius to do fully. Geniuses are simply too rare. This means that the very smart almost always have a competitive advantage.

So you would start a system to recognize potential geniuses, regardless of social background and personal motivation, at an early age. Then a system to develop and use that genius for something useful enough to justify the expense. Genius level intelligence is fairly rare and whatever testing system you have could also recognize the very smart and motivated special talents for optimizing the educational system for them so the cost would probably be fairly low.

The simplest use for the geniuses would be to push them to government think tanks and then use those think tanks to support research, development, and strategic planning.

Now that you have a stock of male geniuses you can fairly easily make them have lots of children. Such human breeding projects are generally seen as unethical, but this kind of positive selection is about the least controversial (and most likely to work) form of eugenics possible. Just raise them to be sexually promiscuous and supply lots of fertile women with generous child support contracts. No real need to force anyone to do anything or try to plan anything.

This should result in the frequency of genius gradually increasing in the population. The process would be slow, but that would be a benefit. Our society and economy is not really built for genius. A process that takes generations but is exponential is probably optimal.

Transition to society and economy that is built for genius is another issue. I don't think anyone knows what it would look like. Best leave that as an issue to be solved by all those geniuses you are generating.

The society of geniuses would be easy to accomplish, simply prohibit idiots from reproducing.

Suppose you have to be licensed to have children, and in order to obtain a license you have to earn citizenship in society, which is accomplished by obtaining a degree in some field of study. Unlicensed reproduction is prohibited, and individuals with bad genes, or who are genetically inferior in intelligence or physicality based on a predetermined threshold of standards are sterilized. They are allowed to exist in society, but are prevented from watering down the gene pool with their weak genes.

You're basically talking about an arian race, but instead of mass genocides based on phenotypes or ethnicity, you're letting those with genetically inferior intelligence and genetic disabilities live their lives without passing on their inferior traits. There may be some flexibility in the laws for cases similar to Steven Hawking, who has a debilitating physical disability, but a vastly superior intellect, in which case he would be allowed to reproduce, but his gametes would be screened or genetically modified to remove the physical disabilities.

Simple eugenics should do it. Give everyone an IQ test at age 13 and eliminate the bottom 50%. You take care of the genetic factors, and you give everyone an incentive to try harder at school.

Obviously such a society would be hell.

The first question is does this exist actually ?

Well, more or less. For example, if you take some very hyped place whose population merely consist of rich people (like, in some extend, Gstaad in Switzerland), the average person tends to be an athelete, a genius or have any other capability which make easier for him to be rich (of course there is very rich idiots, but the average should be more "genial" than the overall average ; and there is poor geniuses).

So one possibility is to first have a country populated mainly by very rich people. The idea is in fact not to "produce" (by genetic ingeneering or whatever) talented people in your country, but to "pump" geniuses from all around the world into your country.

How do you achieve it ? You have to be very restrictive on immigration and offer high avantages to talented people, such as

Then you have to wait and destroy any other place which tends to do the same thing as you.

You can also immagine to expulse or kill people being not talented enough (but it can make some of your talented people to leave your country). Of course, that strategy may force you to have a quite low population as you basically do not increase the number of talented people in the world (at first).

Afterwards, the genetical part of the process should be natural.

A final note however : talented people, as you want them, may be not willing to do the dirty necessary stuff in your society (like cleaning the floor). Particulary if in any other country, due to their talent, they will not have to do it. Therefore you will need less talented people to do the job, still excluding them from the society. That is a problem you can solve by having a "two chambers" country, one with the geniuses, the other with the low qualified servants.

Well in fact that also already more or less exists...