What kind of materials could be made with immense heat, that weren't available in a typical Medieval setting?

So, I won't go into all the details, but in a medieval setting, an individual character has discovered a new extension of my world's magic system, where by using an ability that resembles 'telekinesis', she can change the kinetic energy of the molecules of any substance, in order to heat it or cool it. This is an incredibly advanced ability, that requires immense concentration. The physics of the universe are functionally the same as ours, aside from the ability of 'telekinesis'. What kinds of materials would she be able to make using her ability to change an objects temperature to any temperature, that would not be obtainable by a typically medieval blacksmith? For example, I have already considered how she could make obsidian by heating and rapidly cooling stone.

Edit: thanks to everyone for their answers! I've never used this site before and everyone's been so incredibly kind. Her ability to heat stems from a telekinetic like ability that is more common, so for example she could suspend something in the air whilst heating it, and could shape it without touching it whilst still hot. Absolutely, I take the point that the kind of stone used will only form obsidian with a high enough silicate content. Yes, she is not fully aware of how physics works, and doesn't have a great understanding of how heat works so most things she would have to learn through trial and error - she does have access to the Imperial Library, but that only allows her a Medieval-esque understanding of how the world works. Roughly a thousand years prior to the story, there were others with the same ability as her, and although it has been forgotten about there may be some old records/myths about it to explain where she might get ideas for techniques that might have required generations of experimentation to come up with - like the cold welding, freeze powdering and vacuum ideas.

Not a specific material but a set of techniques:

Welding: you wouldn't have to worry too much about ruining the temper of metals if you could precisely control the location of the heat.

Also, if you can control stuff at that degree, you could also do "cold welds." Just push some molecules from each piece of metal into the other until they are merged into a single piece.

Alloys: These aren't a new metal, necessarily, but they bring out the properties of new combinations of metals. The main thing is that light metals will tend to separate out from heavy metals in a melt. If you can melt and cool it fast enough, you can alloy them with low tech techniques. Though, as someone else pointed out, this requires knowledge that they didn't have at that time.

Tempering tricks: After some practice, they could get the perfect temper every time. Also, if their control is enough, they could possibly do variable tempering for things like: making the edge hard to maintain sharpness but the rest of the blade softer to prevent breaking. The Japanese did this with their katanas by welding two different metals together.

If this person is old enough or come from a line of people who have this very rare ability, they may have developed a more modern knowledge of metal working. That would open up a lot more techniques to a believable story. 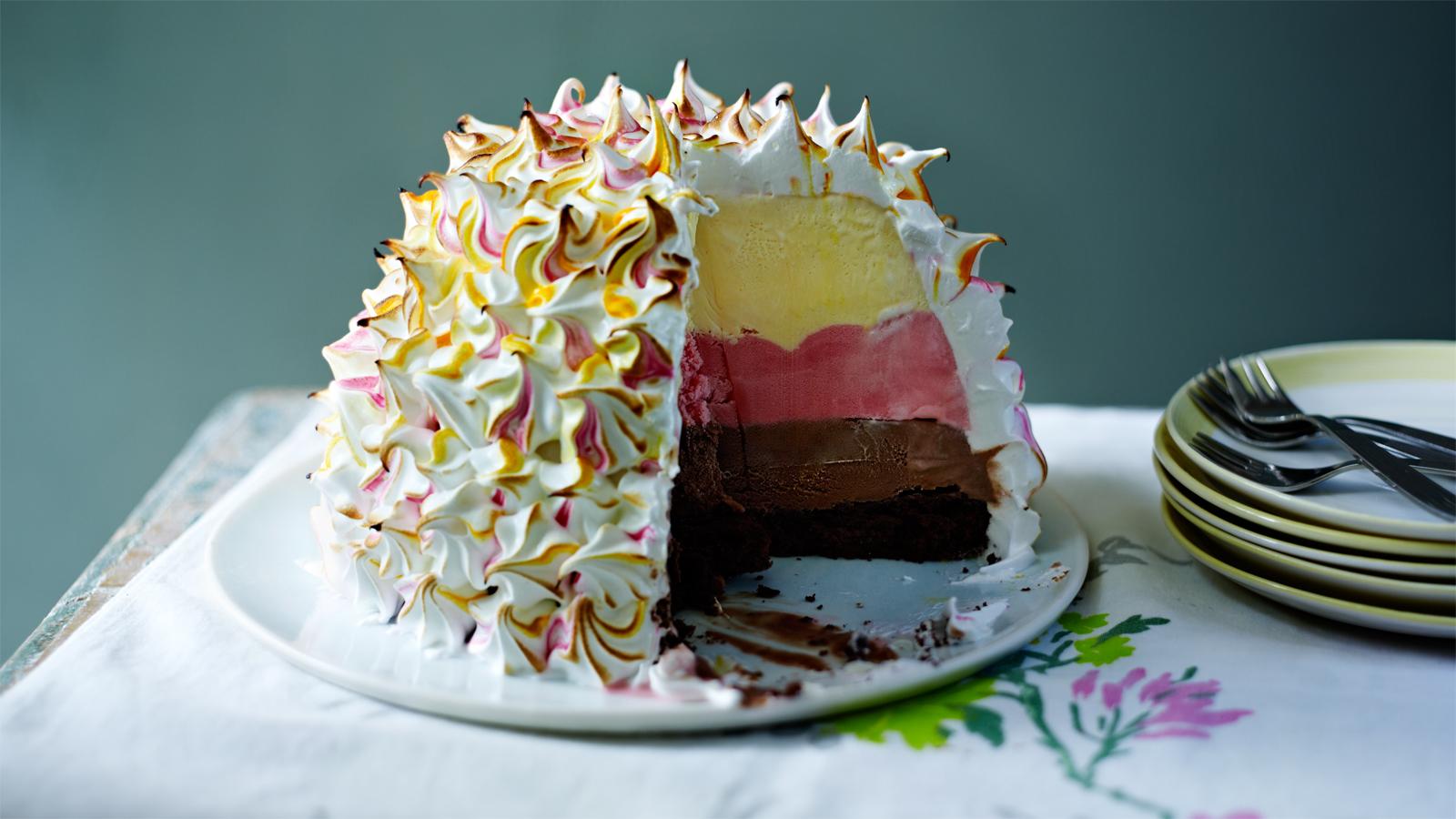 Baked Alaska is a dessert where you take a block of ice-cream, cover it in meringue batter, and place in a super hot oven for long enough that the meringue cooks but the ice cream remains frozen. This requires fine temperature control -- beyond the ability of medieval blacksmiths.

With temperature-controlling superpowers though it's easy-peasy. First draw the heat away from the milk and sugar to create ice-cream. Then draw heat from the ice cream and surrounding air and into the meringue.

Heat a block of iron just above its plastic transition. Next, heat the interior of the block to just above its vaporization transition so that you now have a deformable, and hence expanding, envelope of iron gas. (This would look like a glowing, more nearly opaque version of blowing a glass ball.) Cool the globe to room temperature. Now you have an iron balloon full of essentially vacuum. What's it good for? No idea.

Keep adding heat to a stone. Some component will be present in sufficient quantity that it vaporizes, exploding the stone. Heat the stone quickly enough and your opponents' stone walls are now fragmentation "mines".

Instantly heat something of not entirely negligible mass to a few 100 million Kelvins (possibly a few billion Kelvins to overcome the relatively low densities of most materials) with predictable results.

The blacksmith’s own hands

A medieval blacksmith is limited by tools, not the least of which is convenient vice grip. Sure, they had vices, but things would be so much easier if they could just hold small pieces of metal with bare hands when making forks, spoons, etc. I don’t know if the blacksmiths would stumble on techniques for new materials, but he/she will be giddy upon realizing the protection this new power provides for hands.

A few things come to mind from materials science.

Purifying materials - To purify materials it is very useful to have a temperature gradient and move the gradient along the length of the material so the impurities would tend to stay in the molten or hotter region with the more pure material left behind.

Altering material Properties - Using the skill to control the carbon content along the edge of a sword could allow that edge to be sharper and hold its edge longer.

Shaping materials - If you can heat only the region you want to bend in a very localized way then you shape materials much more easily. A strong mans trick would be to heat the middle of the iron bar and bend it easily why holding the cooler ends.

Art - Being able to fire very thin ceramics or pottery outside of a kiln. Burn images into wood etc.

Cancer treatment might be the most useful application. Hyperthermia is an effective way to treat many tumours, obviously the big challenge is getting the heat to the right place inside the body without harming surrounding tissue. Your mage has exactly the capability needed to do that.

Alternatively, you could use the skill for welding without hammering, a capability nobody else gets until the 19th century.

Given that this is magic, if you can focus enough heat onto a small enough spot you can create nuclear fusion, which is a terrific party trick and never fails to impress.

NB Your mage may need some new eyeballs, or at least a very effective visor if they are looking at anything heated to high temperatures.

Cast iron was known in China but not in the West until after the medieval era. It may have been discovered by accident as it formed in very hot blast furnaces as a byproduct of copper smelting or of the production of wrought iron. Cast iron is hard and brittle, and cannot be worked by a blacksmith, so it might have been seen as a waste material and its potential was not realized until much later. Your character might also discover it by accident while trying to smelter some material more common to his day.

Titanium and titanium-steel alloys were inaccessible until the modern era, although not only because of titanium's very high melting point (see Damon's comment). Your character might call this material "mithril" or "adamantium" depending on his literary influences...

If she can make tungsten swords, they would be stronger than others.

Not the answer you're looking for? Browse other questions tagged science-based magic medieval materials .

6
Magic on an atomic level?
15
Glass rot - could we survive it?
53
What all stops working when I pause time?
2
Telekinetic Mage
1
Can this mind control work?
3
Is electricity the answer to mind control?
4
How to care for your critically injured dragon: Medieval edition | Part 1: staying hydrated
9
How hard would it be for a blacksmith to produce a cauldron?