What size would my race to be to be able to both use insectoid wings and have moderate intelligence, sentience, and general mental aptitude?

I know I can't simply scale up insect wings and place them on a human for them to work. I am creating a race that is constituted of small humanoids with dragonfly wings. How small do I have to make this race for them to both be able to fly and have moderate (or even advanced) mental aptitude? I am looking for both height and weight.

I am looking for an IQ about 90 or above.

It will depend on the conditions of the planet they live in. You see, insects breathe through a system of tracheas without the help of their circulatory system, meaning the oxygen goes from the tracheas straight to the tissues, allowing them to keep constantly oxygenated tissues and perform activities such as their fast movements and, of course, flight. The main issue to this system, however, is that this severely limits the maximum size of the insect according to the levels of oxygen available in the air. That's the reason why, in prehistoric earth, when oxygen levels were much higher, we could have 2 meter long centipedes and dragonflies which were around the size of modern crows. So, based on our own planet and the largest dragonfly that ever existed , your bugs could have a wingspan of around 2 ft (75 cm) and weight as much as 450 grams. Considering dragonflies already have very complex eyes and wing system, being the most successful predators of the modern era, with a 97% success rate when hunting), we can see that they already have a decently developed brain for an insect.

So, regarding size, your insect can grow to at least the size of a crow, maybe even larger depending on how dense is your atmosphere and how much oxygen is available in the air. Regarding shape however, I honestly think they'd look more like something between an insect and a human than a humanoid with an exoskeleton, as the dragonfly is shaped to be a fast and agile hunter. I'd expect them to maybe gain longer legs, starting to use only the two last pairs for overall locomotion, as well as other changes such as adopting the ability to fold their wings like their damselfly cousins so they don't occupy as much space and both sexes developing claspers, which could adapt to handling functions rather than just serving for the males to hold the females in place , but that's entirely up to you. 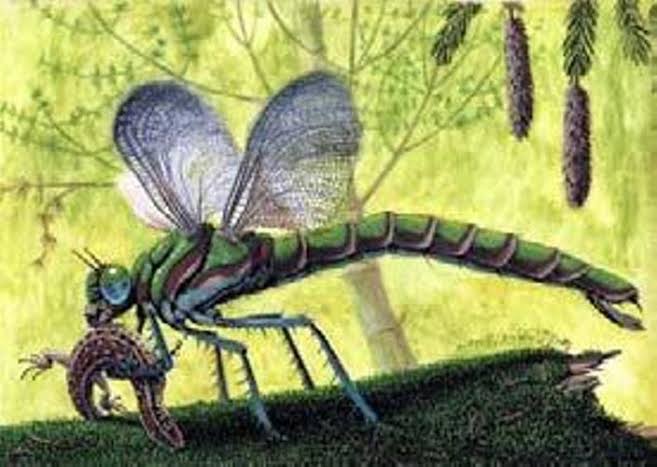 Now, regarding the brain. Dragonflies, with their independent wing control (they're each controlled separately basically, which grants them their great maneuverability) and complex eyes already indicate more well developed brains. However, it'd be very hard for an insect to develop complex thinking like we see in humans, as their brains are much simpler and smaller. That is not to say, however, that they're dumb, as they've been shown to be able to plan and memorize. They will need to go through a decent level of development to reach a more complex level that enables intelligence though, based on our own insects. The presence of a pack behavior could help reach such levels, as well as some level of emotion and empathy (insects as we know them are completely incapable of emotion or empathy, meaning that unless your race develops these abilities, they'll be essentially a race of psychopaths by our standards, with little to no concern for one another, unless they develop some sort of instinct to protect the other members of its species). Additionally, they do have the advantage of having ganglia that control vital functions, meaning that their main brains could, without too much of a stretch, become larger and more specialized to handle higher functions such as more complex thinking and understanding complex concepts, such as the passage of time and the awareness of their death. I recommend taking a look at this to get a better understanding of how insect brains work. It also strengthens my point that they'd likely have evolved from a group of arthropod-like pack hunters.

So, summing up: how big can they grow? Depends a lot on the environment they live in, but with the proper oxygen levels, they can be at least as big as a small crow. Can they have moderate intelligence? Very likely, as they have not only good oxygenation of nervous tissue, but various ganglia across their bodies handling vital functions, which could allow their main brains to specialize further in order to grant them moderate intelligence. Though I don't think they'd have the complexity of our brains, they'd likely be capable of making long and short term plans, making ambushes and traps, understanding abstract concepts and symbols and living in a community at the very least, as most of these abilities can already be seen to some extent amount various arthropods. Overall, their larger size would also allow for larger brains and therefore greater potential at becoming smarter, but I don't find it likely that they'd be too engaged in things such as tool using, not. Meaning however that there's no chance that they could.

Why not go for one of the extinct dragonflies: Meganisoptera had a wingspan of 71 cm (28") and was a predator just like today's...

All predators have more than moderate mental aptitude anyway, so pushing the limit a bit wouldn't be too hard... 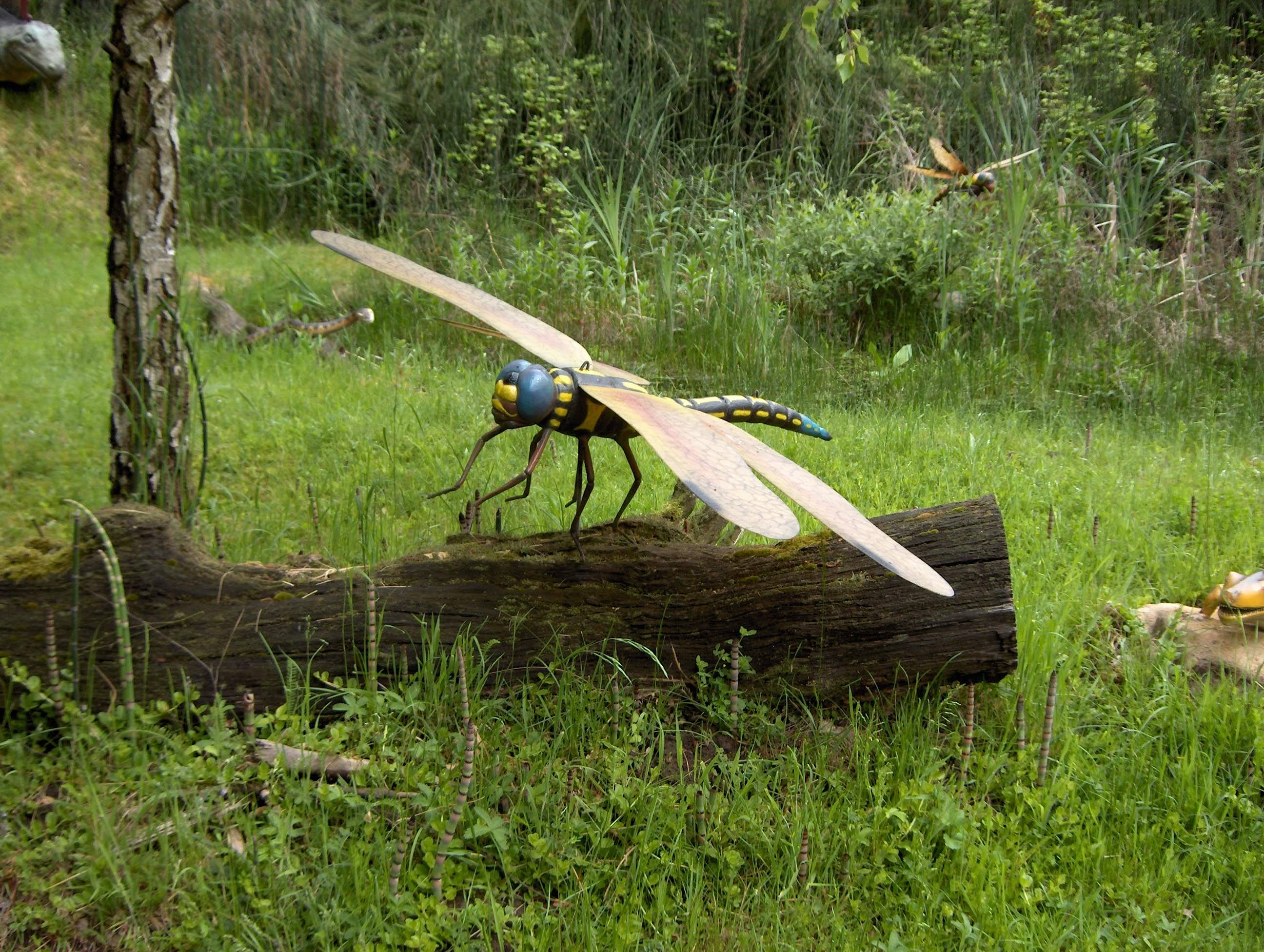 Edit: An IQ of 90 or above would mean a lot of handwavium as a higher IQ needs both a larger energy intake and external stimuli:

Brain size is not necessarily a good proxy for intelligence.

Humans (with some notable exceptions) are the 'smartest species' on earth, but we don't have the largest brains, whales are definitely larger and horses are a similar size. The ratio of bodymass-brain can be used as a proxy; but it isn't sufficient to explain the apparent difference in intelligence between species, with ants, birds and mice scoring better than humans.

Perhaps of particular interest is that the brain structure of warm/cold blooded animals is quite different, with reptiles being more intelligent per brain mass than might be expected. I struggled to find good information on insect brain structures, but an alternative structure could provide more oomph at a small size.

EDIT: Having done some further reading on insect brain structures, they are vastly different from mammals. They are much more tightly integrated to the sensory inputs (eyes, olfactory etc.) than mammalian brains. You would likely either want additional insectoid brain features not seen in earth or a mammal-like brain/body with insect-like body parts.

If this creature only needs the appearance of insectoid wings, then they could likely have a membraneous wing like a bat, except with the 'fingers' altered to resemble the veins of an insect's wing. If you make them more avian in anatomy, then you could likely have them be the same size as a regular human

It seems that the minimum size that these creatures could be would be around 2ft tall, if they have regular human proportions with a dense avian brain. However, these small humanoids could have thinner limbs, due to the square-cube law

Not the answer you're looking for? Browse other questions tagged humans winged-humans .

5
Would it be possible to enhance the brain via a prosthetic?
4
How big would fairies' wings have to be so that they can fly if they are five feet tall?

2
Winged Humanoid Physics
7
Autumn/winter clothing for winged humanoids who try to stay out of sight
5
How fast could a bird-like human fly under optimal conditions?
0
How small can I make this character without making it too weird?
5
Would it be possible to enhance the brain via a prosthetic?
2
World conditions for Flying Humanoid Like a Human