Lightsaber + Pogostick: How would deceleration work on an extendable "arm" of pure handwavium-energy?

In my setting, I'm trying to develop interesting movement/combat mechanics. I asked a related question about ways of slowing free-fall descents in an effort to develop exoskeleton-enhanced parkour. There were numerous problems with that, and even the methods that made sense meant losing the "spirit" of the movement dynamics I was looking for. Among the many interesting and thought ideas posted -- and still being posted -- there, one that stuck with me was that of "super pogo-sticks."

This got me thinking about some other crazy stuff leaning more towards science-fantasy than straight science fiction. That said, I do want to understand some of the possible physics involved here to make my idea work. Yes, there's serious amounts of handwavium being applied here. That aid, I do want to focus on the mechanics involved of creating a pushing device like the one below.

Below I have the idea, followed by some supporting images, and then the problem I'm facing. It's some scrolling.

The Idea Handheld "Booster-Blades" (I haven't come up with a better name yet) capable of creating a handwavium empowered "energy field" that can that serve three functions: 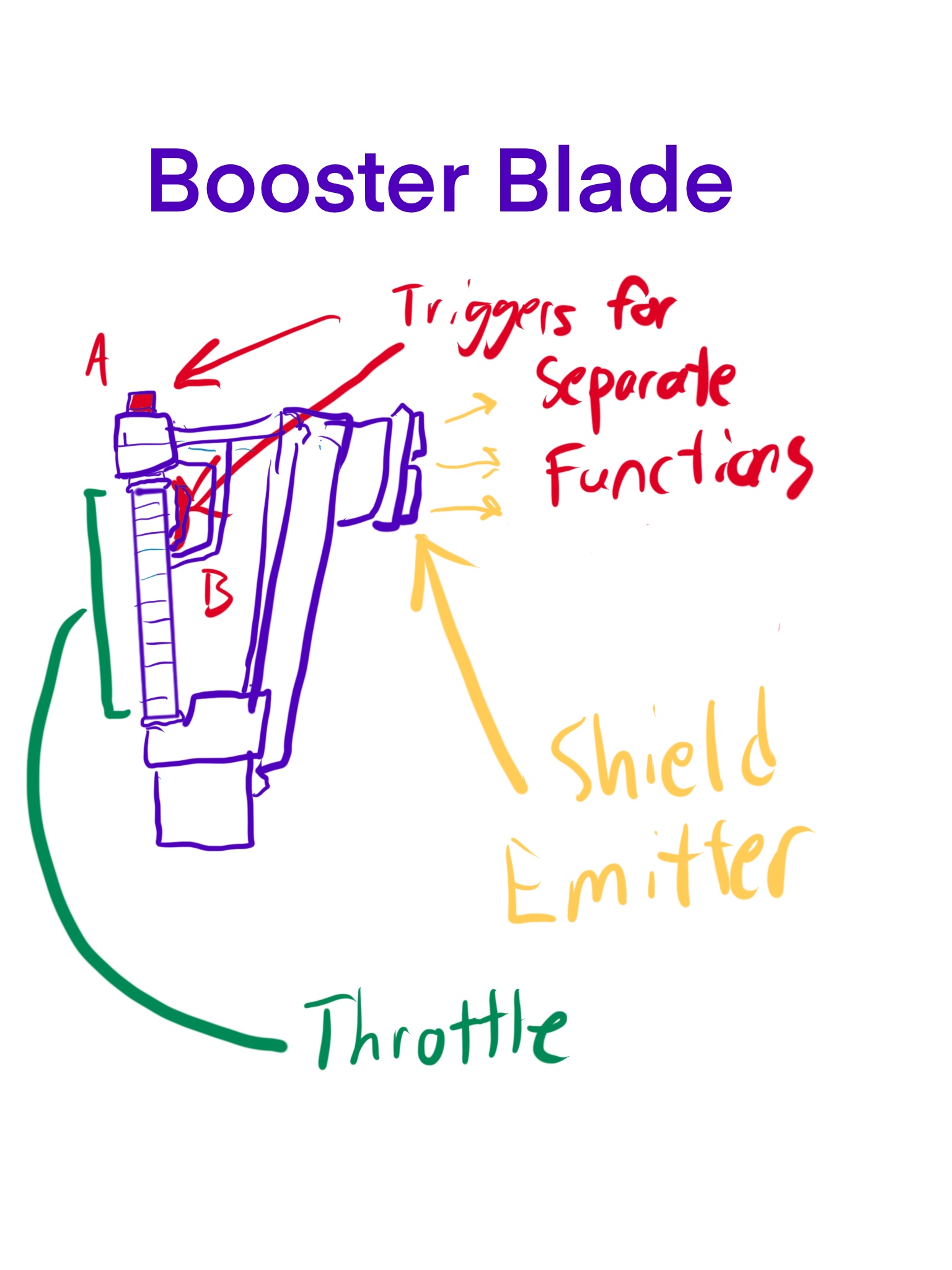 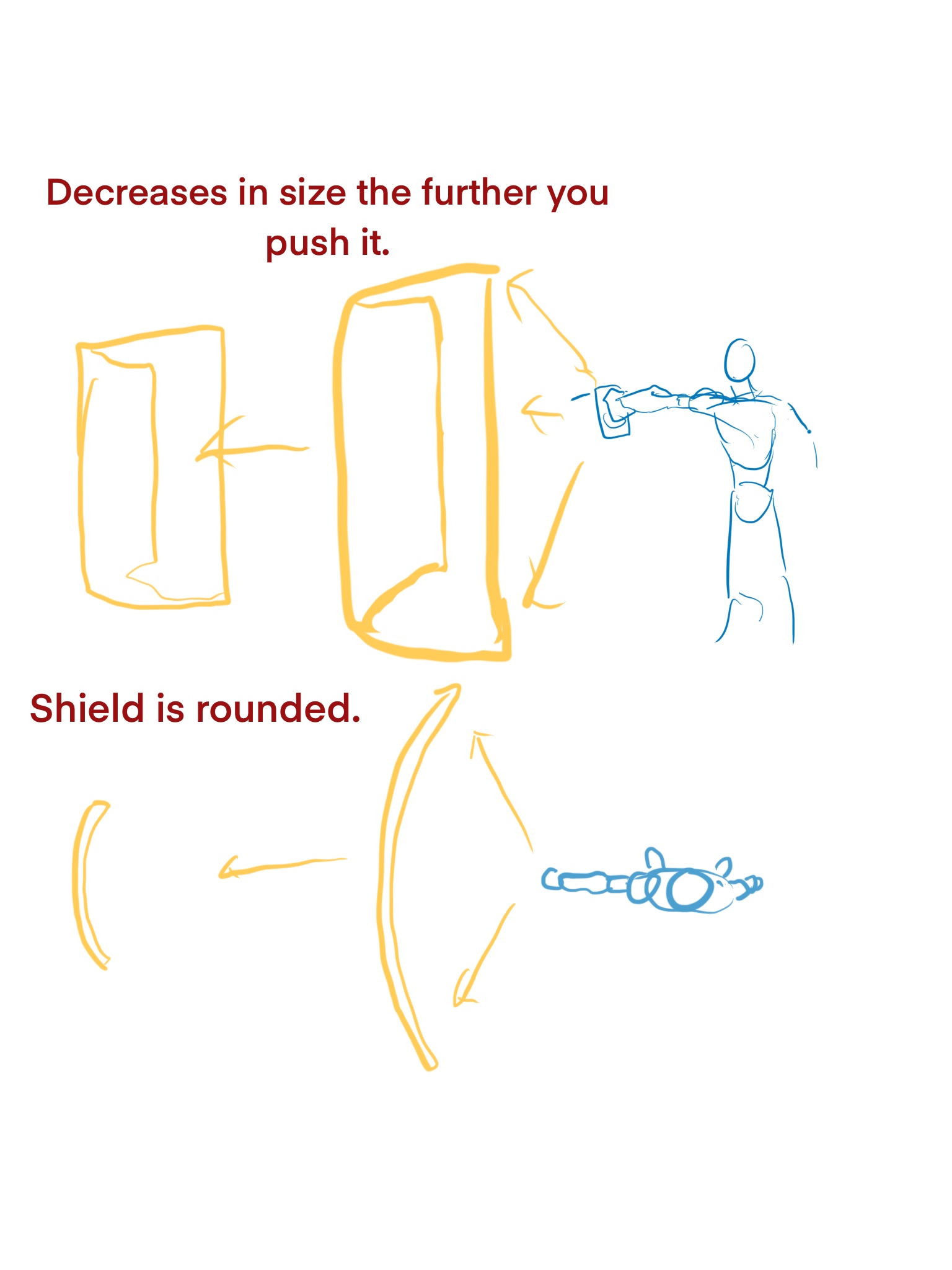 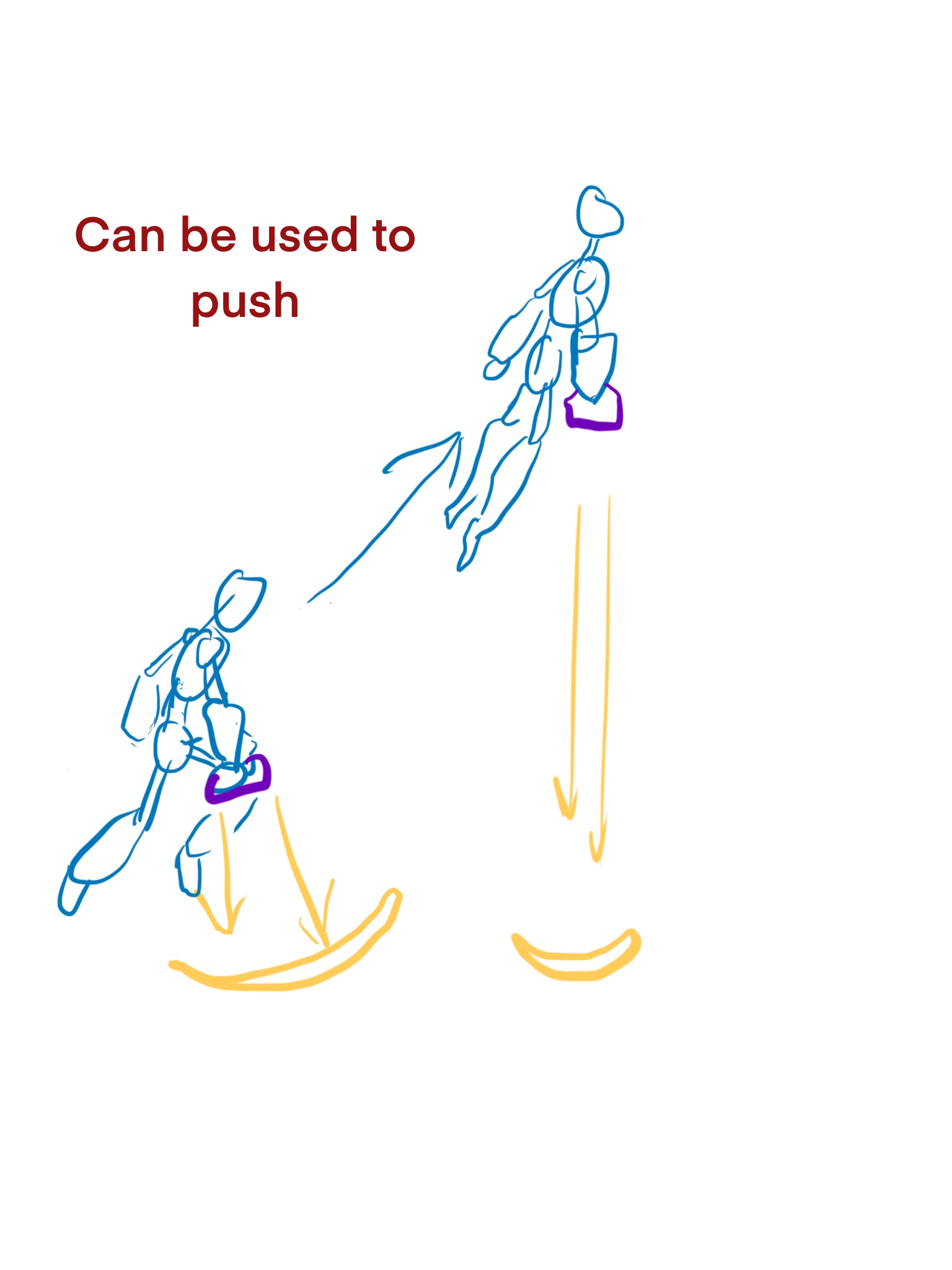 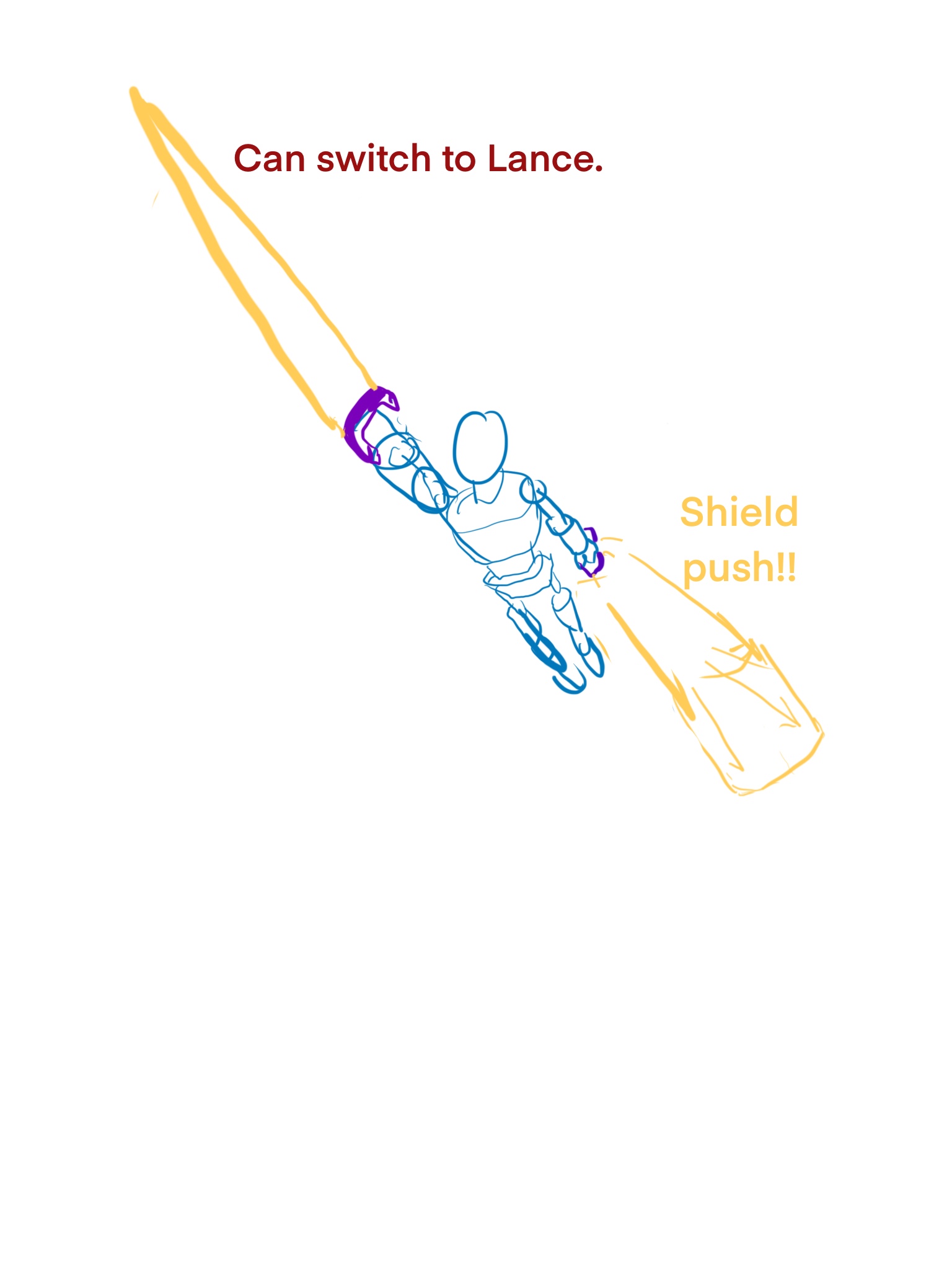 In this setting, the shields have negated much of the utility provided by ranged ballistic and directed energy weapons. Thus, people have opted towards becoming the projectiles themselves. Just bear with me. I'm not trying to figure out how much sense that makes (just yet). Thus, using shield-pushing and the lance, people basically use "sword and shield" fights but as human pinballs, where much of the skill comes from your talent for creating interesting and unexpected angles.

I like the video-game esque movement and combat mechanics at play, but I'm worried about how they decelerate their falls. I'll handwave HOW the shield is tangible, but not how basic physics works. If you catch my drift.

When I first came up with it, I thought the grips on the booster-blades might be pressure sensitive, allowing them to "slowly extend" the shield as they gripped harder or bring it back as they loosened up -- allowing them to cushion their falls to a stop or sort of "pogo" back up.

In my head, it would be like clap pushups -- you don't land rigid, or you snap your shoulder; you slowly decelerate before popping back up.

If the shield's extension and contraction is controlled by how hard you grip the handle, or perhaps by turning an exoskeleton-attached throttle like that of a motorcycle, would it be possible to use such a pushing-device to cushion your falls?

I like the idea of shield-pushing. I know there's lots of handwavium being applied to the shield itself, but, if you grant me that, how could it be used to decelerate and permit the sort of vector-based combat I'm looking for? Does the throttle/grip solution make sense?

If the force behind the shield was like that of a "spring" it might make sense, right? If it could contract, storing up potential energy for subsequent release, would that interfere with other functions like being able to "bash" with the shield or use to stop projectiles?

What are my options?

In school physics classes, a spring is just a spring, and you learn by hanging weights and measuring deflection how to find the constant spring modulus $k$, up to the point where you exceed the elastic limit and your spring deforms into a messy wire. The real world, as with most things, is nowhere near that simple, and engineers can create a bewildering variety of springs with varying behaviours over their elastic range (ie $k$ varies over the range $x-x_0$, over time, or both). The conical springs in old mattresses are a good example of this: they are intended to have a steadily increasing $k$ value with increasing force/deflection, meaning that light people sink into the mattress a bit, and heavier people sink in more, but not proportionally more, so the mattress can accommodate a wider range of body weights while still providing 'some squashiness' to everybody. Equally car suspension springs try to have the awkward property (through varying the coil pitch and sometimes the radius) of always offering a good range of 'quick response' deflection (ie allowing rapid deflection in response to the sudden force of hitting a pothole) while still accommodating as wide a range of overall forces (ie how heavily you've loaded your car) with as little deflection as possible.

What this means is that if you set your phlebotinum generator up to produce a shield which is 'elastically' connected to the handle, you only need to handwave in the power to dynamically adjust the modulus of elasticity $k$ as well as the zero-load-extension $x_0$, to permit a bewildering variety of behaviours for it. If you make $k$ very high you create an extremely rigid shield good for bashing things. If you start with $k$ quite low ('soft') and $x_0$ quite large and absorb a fall or blow by allowing the shield to deflect away from its basepoint, then quickly ramp up $k$ to a stiffer value, the device will exert a powerful force to push the shield back to its basepoint, springing you up.

Proper management of these two controls will be difficult for a human to grasp, especially since $k$ is not very intuitive to our savanna-brain subconscious, which would justify any training regimen or beginner incompetence you want to write in. The potential energy stored in a spring is $E_{spring}=\frac{1}{2}k(x-x_0)^2$, so over-egging the controls could easily exceed the handwavium generator's capacity to absorb or supply the difference in energy, with whatever results you deem appropriate.

Not the answer you're looking for? Browse other questions tagged science-based technology science-fiction warfare physics .

4
Energy manipulating superhero -- how would it work
12
Space weaponry?
7
How can a substance that doesn't follow the laws of physics look and feel like ordinary matter?
5
Properties of magnetically confined plasma shielding
8
Designing a plausible Corinthian-style modern combat helmet
9
Are fly wheels a valid means of energy storage for powering a large space station?
12
Casaba Howitzer vs. Magnetic Shelds: Plausible Counter?
10
Proper combat distance scaling for a sci-fi space opera tabletop setting
4
Methods of Conducting Electricity through a Vacuum?