What would days and nights look like on this cylindrical world?

This is yet another "literal worldbuilding" question, as in, building worlds. Inspired, in part, by this question.

What if this world is a very long (effectively infinite) hollow cylindrical cavity with the diameter roughly equal to that of the Earth's orbit. The day/night cycle is generated by the following arrangement: multiple suns falling through the center of the cylinder. The distance between the suns and their speed relative to the world surface are adjusted to generate approximately 24 hours cycle, just like on Earth. 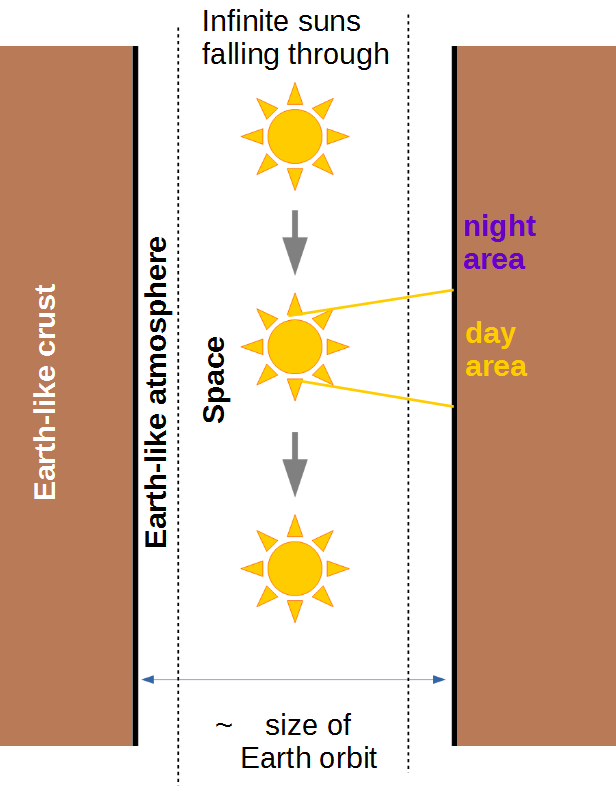 While there are several issues with this idea, most importantly huge tidal waves generated by the gravity of the suns, and the fact that empty space inside will be quickly filled with matter both from the suns and the cylinder itself, let's ignore them for now.

This question is simple enough:

I would like the answer based on actual geometry and optics. I have poor spatial imagination which is why I need some help with that :)

The suns should be spaced enough so that the night is mostly dark, though of course we can't avoid some light, since there's no horizon. The size and the energy output of the suns can be modified as well, because the cylinder would collect all the energy, radiation and solar wind, which could be too much.

Optionally, I would also like to see what other problems arise with this arrangement, though I could ask a separate question for that.

There's a similar "tube world" arrangement in this question, but it's a little too complicated and can't be used to answer my question.

Just to clarify: I want this world to support flora and fauna as close to Earth-like (temperate climate) as possible.

Let me start with the additional problems that arise: 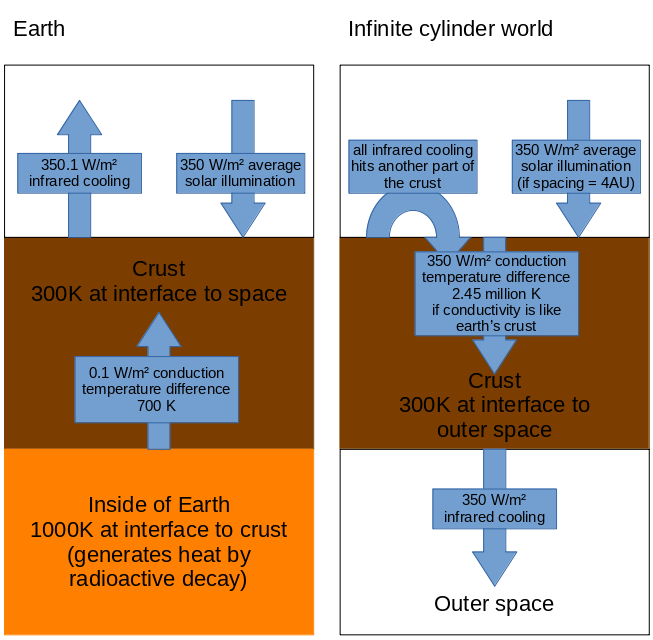 Now, to your actual question.

The only relevant parameter is the distance between the suns, in AU. The speed at which they move follows automatically from your requirement that one sun should pass every 24 hours. It will be rather high, though :)

You will, of course, always see an infinite number of suns, but most of them will be very dim and very close to the horizon. Here's what the sky will look like, with the apparent brightness of the suns (= the area they occupy in the sky) written next to the dots. 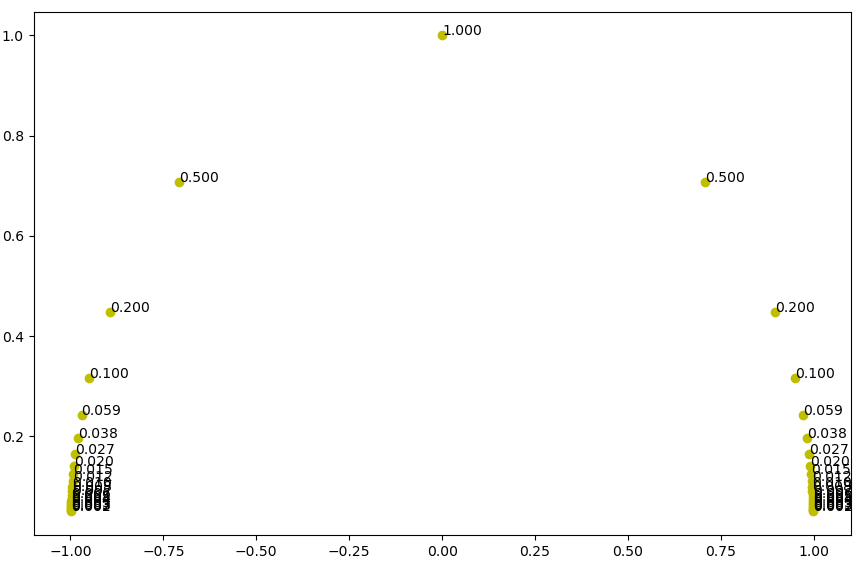 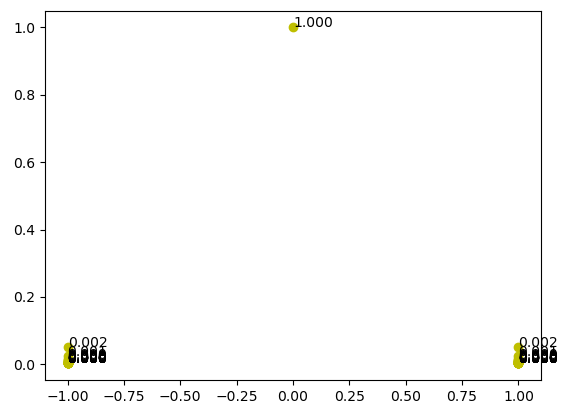 To calculate the total illumination, some math is required. You need to calculate the infinite sum of the contributions of each sun. In this formula, d is the distance between the suns in AU, and o is the offset from mid-day, where o=0 means mid-day, and o=1 means mid-day tomorrow.

This gives the following equation for the momentary strength of illumination (assuming that the power output of one sun at 1AU distance is 1):

To find your preferred value of d, just plot this formula for various values.

Here's a quick python snippet that does exactly that, since I couldn't get nice plots out of Wolfram Alpha:

And plots for some distances: 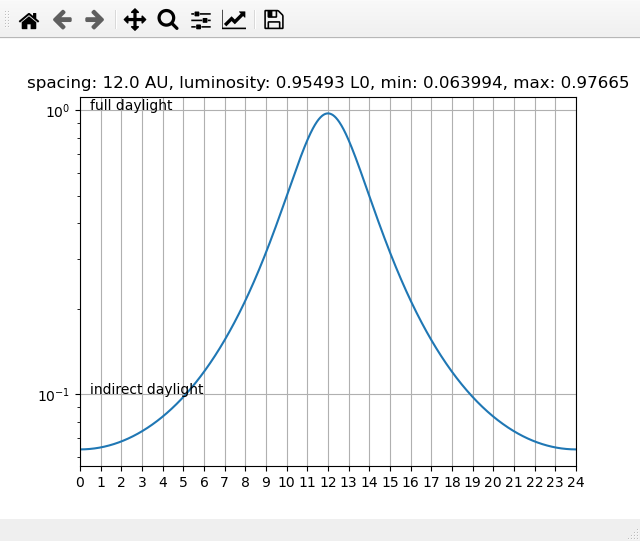 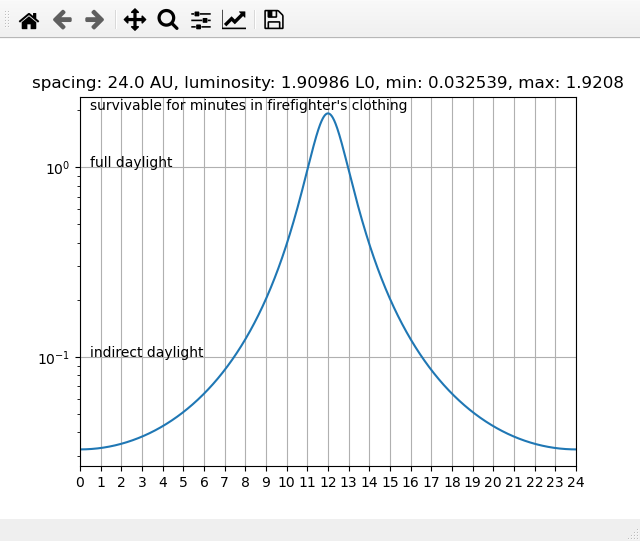 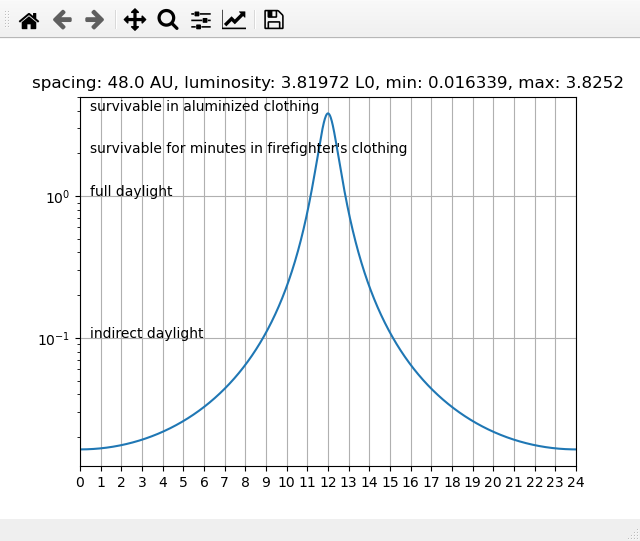 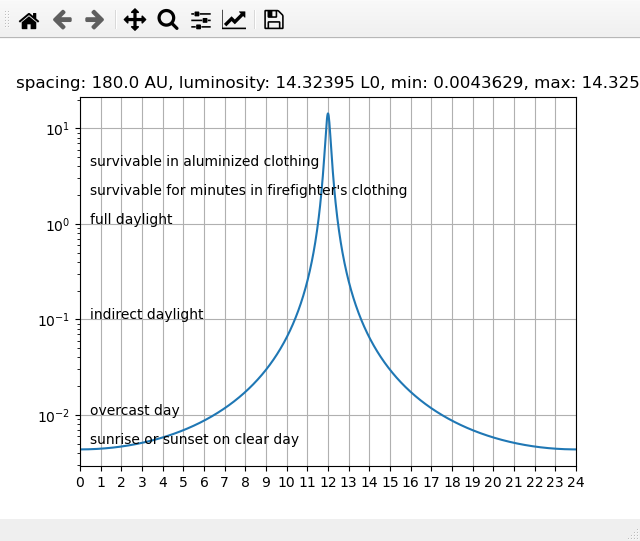 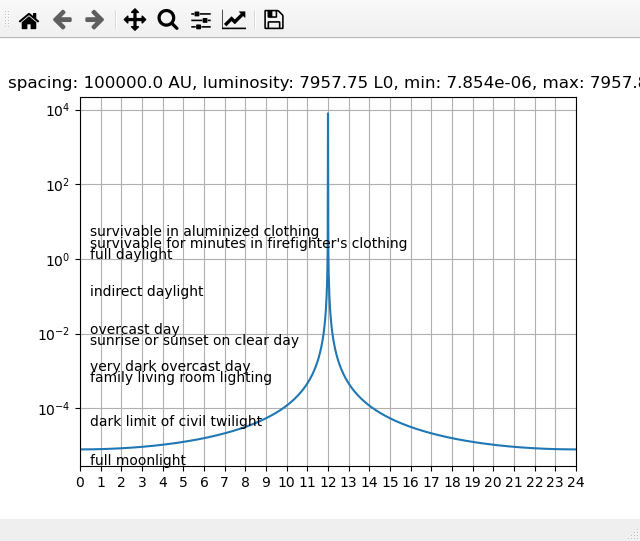 Distances above 180AU are impossible because then the suns would be moving faster than the speed of light; decreasing the cylinder diameter would solve this.

In these cases, I try to maintain the same average heat flux that is experienced on earth, to allow meaningful photosynthesis. You can see that if you want proper darkness at night, there will be short hard bursts of heat which will only be survivable in underground bunkers.

If you're willing to reduce the average heat flux to say 1% of that experienced on earth, that is, around 3 W/m², you can achieve this: 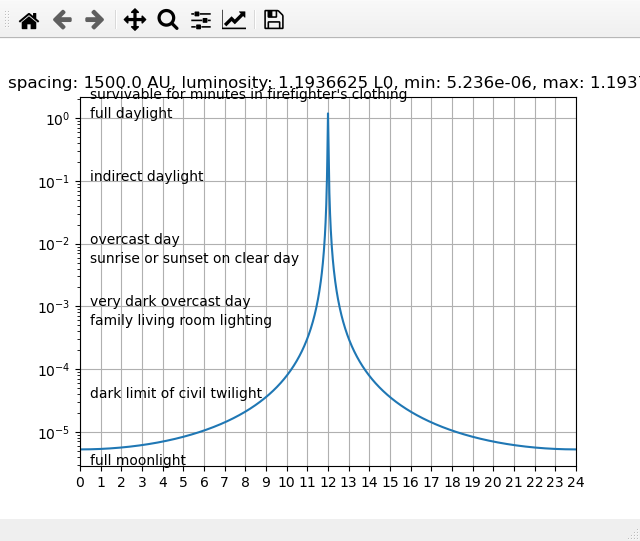 With only 1% of the power flux, you will only have 1% of the photosynthesis, solar power, wind power, fossil fuel formation etc, so your land will generally only support 1% of earth's population density. Advanced civilizations may however harvest tidal power from the tidal accelerations of the passing stars, and "reverse geothermal" power from the heat flux through the crust. This heat flux will be far stronger than on earth.

Other interesting effects which I haven't considered:

There's another great way in which you could achieve day and night, though: Your population could live in a narrow valley such that only suns that are above 30-or-so degrees over the horizon are actually visible. There will still be atmospheric scattering, but some tinkering with the atmospheric composition could fix that.

First pass: the geometry is simple

In the first pass, we disregard the cylindrical shape of the world, and we assume that the light sources are in free space, moving against a black backdrop.

With these assumptions, it follows that:

What about the speed of those light sources?

What the observer sees

At noon, the observer sees the light source overhead bathing the landscape in a sea of light, very very similar to what we see at noon.

At midnight, the observer sees a dark sky, with two very luminous stars at opposing points near the horizon.

Unlike on Earth, where the difference between daytime and nighttime is clear as day and night, on this world illumination varies gradually from full day to full night, with no clear separation between them. Most of the time it will be quite dark:

In the first pass we disregarded the cylindrical shape of the world, and we assumed that the light sources move against a black backdrop.

Now, that is perfectly fine as regards visible light. Assuming that the world has about the same albedo as Earth, the cylindrical shape of the world won't make a great difference. Yes, at noon there would be just a little more light than what the calculations in the first pass would suggest, etc. But the difference is utterly negligible, even for the keenest photographer.

Earth likes very much to remain at constant temperature; see the great worldwide wailing at the prospect of increasing the average temperature by a measly one degree centigrade over a century.

And here comes the catch: those infinitely many sources of light will make the inner surface of the cylinder as hot as the Sun in a very short time. (Short time, geologically speaking, of course.)

Let's see what happens with a random square meter of ground in this cylindrical world:

If the tube rotated to produce "gravity", that gravity would pull down to the outside of the tube. So people would look up at the suns passing by.

If the suns have the mass of Sol, the Sun, they will eventually swell into red giants and greatly increase their luminosity after about ten billion years. That will cook the inside of the cylinder and maybe evaporate it into gas escaping into space. Then the red giant stars would turn in to white dwarfs after shedding significant amounts of mass. The stellar mass loss would produced strong solar winds which might push apart the cylinder, destroying it and would certainly devastate the already devastated surface.

One way to avoid it would be to make the cylinder much narrower and make the suns correspondingly dimmer than the Sun to adjust for the closer distance to the surface of the cylinder. Those dimmer stars will have lower mass than the Sun and will have steady luminosity for a much longer length of time, hundreds of billions or maybe trillions of years depending on their mass.

Or the suns could be stars which were already white dwarfs and which would be very, very gradually dimming down to black dwarfs. That would also take a very long time, perhaps trillions of years.

Or maybe you could make the suns giant lamps moving down the cylinder. They would have giant fusion generators to generate the power for the giant lamps used to illuminate the inside surface of the cylinder.

Have you thought about what material your world would be made out of? You might need some hyopthetical fictional super strong materials.

Have you read Larry Niven's article "Bigger than Worlds"?

I can talk about the math in the abstract but since we have no figures here, it will be rather abstract.

The two factors will be: 1. Absolute magnitude of the suns 2. Distance from the sun to the surface when the sun is directly overhead.

The suns' light falls off by the square of the distance. This will determine its relative magnitude, which will increase until it passes over ahead, and decrease as it goes away. This will have to factor in the overhead distance. If the sun passes 3 (units) overhead, when it reaches 4 (units) farther away from that point, it will be only 5 (units) away from the person on the ground. Hence, if we measure give the brilliance of the sun at directly overhead a measurement of 100, it will be 36 when 5 units away -- 5 divided by 3, result squared, used to divide 100.

If it were alone, the new sun will first appear in the sky when the relative magnitude rises to a high enough level that a human eye can see it against the ambient light. The human eye is capable of seeing quite dim objects, so the actual factor is more likely to be that the prior sun is still putting out enough light to drown it out. (The luminosity difference between the Sun and the dimmest stars visible to the naked eye on a clear night past twilight and with no ambient light sources, either the moon or artificial, is about 10 to the 14th power.)

There would be no "night" vs. "day" You would have the sun overhead in its full brilliance, and then it would move off, slowly dimming, until it was dim enough that the new sun could be seen, and then it would continue to dim as the new sun brightened. The peak darkness would be the point at which the two suns were equal in brilliance. Then one would brighten as the other faded.

Distance from the surface will be important because that will decrease relative magnitude in a way that is not entirely dependent on the motion. There could be some very dark periods but the variation in light and dark would be continuous.

Not the answer you're looking for? Browse other questions tagged science-based alternate-worlds day-night nonspherical-worlds .

31
Which shape for an infinite world with usual sun cycles?
9
Infinite tube world

4
What would allow a livable planet to have an always-night area, an always-day area and a day&night cycling area?
7
Season cycle that would occur on a habitable planet that orbits two suns?
2
What would day and night look like in a circumbinary system?
5
What sort of setup of a binary star system would allow only one sun to be "up" at a time?
9
If the Earth was part of an ultimate solar system, what would the sky look like?
4
Days and Seasons via Daily Eclipses in a Flat World
5
What forms of life would be best adapted to living on a world with nine year long days?
3
How would a planet's (human) life adapt to inconsistent night duration?
3
What would weather be like in an O'Neill Cylinder with windows?